As noted under Illustrious Raitts, Sir Andrew de Rathe (Rait) was the bearer of several letters to King Edward I in 1297 asking him to give credence to accounts regarding insurrections in Scotland where William Wallace arose and boldly attempted to throw off the English yoke, and achieve the independence of his country. Henry Chien, Bishop of Aberdeen, the Earl of Mar, and the Countess of Ross, attempted to put down the insurrection, but without avail. Sir Andrew of Raite, younger brother of Sir Gervase de Rathe and inheritor of his lands in Nairn, appears to have taken an active part along with them, and he was sent south as the bearer of dispatches to Edward, to give an account of the services rendered by these friends. Copies of these letters still exist and it seems they are unique historical records of events unfolding at the time. It is exciting to learn that our putative ancestor was involved!

In Volume 2 of the Calendar of Documents Relating to Scotland preserved in Her Majesty's Public Record Office (published in 1884) there is the comment:

“The state of Scotland, though unsettled, cannot have been thought dangerous in the summer of 1297, as Edward left for Flanders in August, taking with him many of the barons and knights of Scotland, who had been released from prison on condition of serving against France. But there is no doubt there were disturbances in the far north, in the districts of Moray and Ross, set on foot or fomented by Andrew de Moray, in May, who shortly afterwards joined his forces to Wallace and fell at the battle of Stirling. So much is learned from several letters to the English King in July of this year, written by the Bishop of Aberdeen, the Earls of Buchan, Mar, and

Strathearn, Sir Gartnet of Mar, and Sir Reginald le Chen, who were all actively engaged in his service at the time.”

Several of these letters refer to Sir Andrew de Rathe (Rait). Summaries of the writers and subject of them are given in the above work, though the complete text and translations where available are recorded in Documents Illustrative of the History of Scotland from the death of King Alexander the Third to the Accession of Robert Bruce (1286-1306) published in 1870.

24 July 1297, Inverness. Letter from Henry, bishop of Aberdeen, John Comyn, Earl of Buchan, constable of Scotland, and Gartnet son of the Earl of Mar, to the King in which they give an account of their putting down an insurrection in Moray, and ask credence for Sir Andrew de Rathe. The Countess of Ross had aided them, for which they commend her to the King.

To the very noble and very excellent prince and their very dear lord, sir Edward, by the grace of God the noble king of England . . . and duke of Aquitaine, his loyal and faithful Henry, by the same grace bishop of Aberdeen, John Cumyn, earl . . ..Gartenethe, son of the earl of Mar, as to their liege lord, \send\ all reverence, honour, and service. Whereas sir John Cumyn, earl of Buchan . . . named, and sir Alexander, his brother, are bound to you by writing to hasten to you, according to the tenor of their writing, to . , . the March, sir Andrew de Rat, your bachelor, overtook him, carrying to the aforesaid earl your writ, that he should hasten towards the north of Scotland to the company of the bishop and sir Gartenethe before named, in consequence of a mischievous war which had been raised in the country by some of your enemies, who were breaking your peace to curb and repress which war, according to the power which we have been able to collect so hurriedly, we are drawing towards that March. And as we were in Launoy-upon-the-Spey on the Tuesday before the feast of saint Mary Magdalene, there met us Andrew de Murray with a very large body of rogues, the number of which sir Andrew de Rate, your bachelor, can show you, according to what he heard from the people of their company. And there the aforesaid rogues betook  themselves into a very great stronghold of bog and wood, where no horseman could be of service.

And we have to inform you that the aforesaid earl and his brother remain in the country , . . north, by your orders in your writ, and by two other writs, patent and close, which came to the earl from your council . . . and sealed with your seal of Scotland, for the great damage which is in the country. And since it would be too long a business to write . . . send to you all the points and the occurrences which have happened, and the condition of the country in all matters, we pray you to have the goodness to give credence to sir Andrew de Rate, your bachelor, who can tell you these affairs in all points, for he was in person at all these doings ; wherefore, if it please you, be so good as speedily to send back your pleasure. Our Lord keep you and increase your honours. This letter was made at Inverness, on the day of saint James the apostle. CCCCLVIII. [1297. July.]

25 July 1297, Inverness. Letter from Henry, bishop of Aberdeen, John Cumyn, earl of Buchan, and Gartenethe, son of the earl of Mar, to the King in which they ask credence for Sir Andrew de Rate, who will relate Andrew de Moray's insurrection and the state of the country. Written in Norman French. [Chancery 1297. Miscellaneous Rolls, No. 474.]

c 25 July 1297. Letter from Donald, earl of Mar to the King asks credence for Sir Andrew de Rathe who will shew him the state of the magnates of the north part of the kingdom. Written in Latin. [Chancery Miscellaneous Rolls, No. 474]. Traces of round seal endorsed. No date.

End of July 1297. Letter from Malis, earl of Stratherne to the King begs him to give credence to what he shall tell him by the mouth of Sir Andrew de Rathe the bearer. Written in Norman French. [Royal Letters, No. 3279.] No date. Trace of seal, red wax, on back.

credence for Andrew de Rathe for some business on his own account.

To the very noble prince and his most dear lord, sir Edward, by the grace of God king of England, lord of Ireland, and duke of Aquitaine, his own Malis earl of Stratherne, sends greeting, service, and honours. Dear sire, I pray you, if it please you, to have the goodness to believe sir Andrew de Rathe, the bearer of this letter, in the matter which he will tell you verbally from me. Greeting. May God keep you, body and soul.

On the other hand, on his way south, the Knight of Raite had an interview with Cressingham, the King's Chamberlain in Scotland, but did not impress him very greatly, for he wrote privately to Edward. On 5 August 1297 a letter to the King from Hugh de Cressingham on the affairs of Scotland said “…..Sir Andrew de Rathe is going to you with a credence, which he has shown to me, and which is false in many points, and obscure, as will be well known hereafter, as I fear; and therefore, sire, if it be your pleasure, you will give little weight to it…..”  It is believed the shrewd Chamberlain probably discerned that these friends were seeking important favours from Edward, namely, the estates of their rivals, by exaggerating the value of the services they had rendered.

Possibly as a result of all these comings and goings and intrigues, in papers relating to Protections, pardons, presentations, &c. from 28 May-14 Nov 1297, Edward I ordered Special conduct for Andrew Rate, the bearer, going on the King's particular business to Scotland, and that he be furnished with horses when required.

Andrew de Rait is also mentioned in other official documents regarding payments for his services.

1304-5 Discharges – To Sir Andrew de Rathe knight, for his debts in the Wardrobe by Sir Walter de Bedewynde's (Cofferer of the Wardrobe). To said Sir Andrew, associated with said …. John (Sir John de Drokenesford keeper of the Wardrobe) to make these extents at 3s. a day, for himself and his esquire from 1st May till 31st December [1304], 184 days, 27l. 12s.

Also to Sir Andrew de Rat knight, per diem ut supra for his own and his esquire's pay from 1st November till 31st January anno xxxiii, 92 days, 13l. 16s. 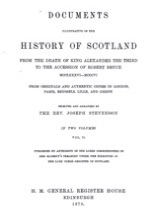