Other Coats of Arms

This page provides some details on other more distant ancestor families and also others which are related to the Raitts to some extent. Again, some of the information has been extracted, with permission, from the Internet Surnames Database owned by Name Origin Research Limited. Early bearers of the surname are noted and, as with the more directly related kin, I show how these diverse families are related to “my” ancestral Raitts. More names will be added in due course.

Recorded in many forms including Huchen, Hutchen, Hutchin, Hutcheson,  Hutchson and others, this is an Anglo-Scottish surname of French origins. Probably introduced by the Normans at the Conquest of England in 1066 it is either a diminutive spelling of the medieval given name Hugh, a popular name through northern Europe in the Middle Ages or derived from the Old French Huchon - a baptismal name 'the son of Hugh'. The origination is assumed to be the Germanic word "hug", meaning heart or spirit. The names Hugh and Huchin were introduced into England in the spellings of Hue, Huecon or Huchon and soon generated their own variant forms in both England and Scotland. Hutchins and Hutchings are West Country spellings but however spelt the name means "son of Hutchin".

The first recorded spelling of the family name is shown to be that of Aleyn Huchun who is recorded in the 1277 "Court Rolls of the Manor of Wakefield", Yorkshire. Gilbert Huchun is recorded in the Subsidy Tax Rolls of Sussex in1296, during the reign of King Edward I. Since medieval times the name development has included John Huchouns of the county of Essex in 1327. Other early records of the name mention John Huchoun, of County Somerset, who was documented during the reign of Edward III (1327-1377); Isota Huchon was recorded in Wiltshire in the same year. Willelmus Huchon of Yorkshire, was listed in the Yorkshire Poll Tax of 1379., and Cecily Howchyngs of Norfolk in 1523. Elizabeth Hutcheon was married in 1659 in London, while Issabell Hotchin was married there in 1670.

The name was taken early to Scotland in the late 14th century by settlers in Aberdeenshire. The family is a sept of clan MacDonald, and as Hutcheson is the name is met chiefly in the shires of Lanark, Renfrew, and Ayr. James Huchonsone, who held land in Glasgow in 1454, appears to be the first of the name on record there. John Huchonson was admitted burgess of Aberdeen in 1466. William Huchison was a tenant of Uthircloy, Ardmanoch in the year 1504. Brothers George and Thomas Hutcheson founded the hospital in Glasgow which bears their name in 1639-1641 - they were sons of Thomas of Lambhill, co. Lanark, and both writers in Glasgow. John Huchesoun represented Arbroath in the last parliament of Scotland (1703-1707).

The name does not appear at all in the Lyon Register (of Coats of Arms) until 1856.

Huchesoun - This coat is given variously, sometimes with three boars' heads, sometimes three pheons' on the fess, instead of the arrows.

Hutchison of Scotstoun (Renfrew) - similar but with the fess azure and the boar's head erased.

Crests for the various Hutcheson families are:

- an arm, in armour, throwing a hammer, all ppr. Sursum.

Kinnear is a Scottish surname that took its name from Kinneir, near the village of Wormit, Fifeshire. The place name is first recorded at the beginning of the 13th century as "Kyner", from the Gaelic word "ceann", meaning head(land) and "iar", to the west. The first recorded spelling of the family name is that of Symon de Kyner mentioned in the Records of the Priory of St. Andrews, Fife. The original family held their lands until the beginning of the 18th century. Simon, son of Symon, made a grant to the church of St Andrew, which was confirmed by Alexander II in 1216. Sir John de Kynnere is mentioned in 1286. In 1380 Robert II granted a charter to John de Kynneir of the lands of Kynneir as a free barony.

Petrus Kynior was elected common councillor of Aberdeen in 1477, and John de Kynor was burgess of Aberdeen in 1439. John of that Ilk sat in parliament in 1560, while Henry Kinneir was Commendator of Balmerino Abbey from 1574-1600, and a Lord of Session. David Kinneir of that Ilk, last of the direct male line, died about 1682. Sir John Kinneir Macdonald was Envoy to the Shah of Persia. His brother, William was Archdeacon of Wiltshire. In 1881 the lands of Kinnear were the property of John Boyd Kinnear of Kinloch.

Other variations of the name include Kinnar, Kinner, and the more usual Kinnear. A Coat of Arms granted to a Kinnear family is black, on a gold bend, three canary birds proper. The Crest is two anchors saltireways proper.

Kinneir of that Ilk, Fife - sable on a bend or three martlets or papingoes vert.

Crests for various Kinnear families include:

- Two anchors, in saltier, cabled, ppr. I live in hope.

- Kinnear or Kinneir, two anchors, in saltier, with cables, all ppr. I live in hope. 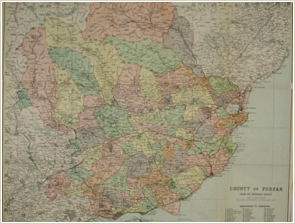 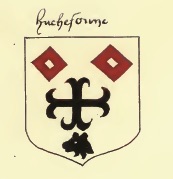 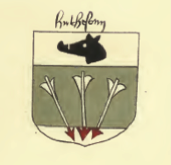 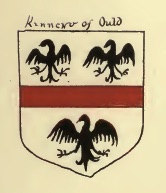 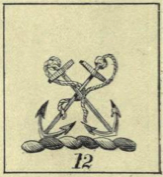 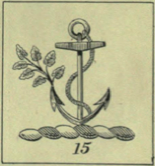