A couple of years ago I learned my grandmother, Jane Lindsay, had given birth to a son when she was a teenager. She was a domestic servant at the time and the circumstances of the birth were hushed up. The child, named Kenneth Lindsay Ormonde, was born on 21 June 1906 at Newton of Inshavan, Tannadice where Jane’s parents were living. According to the birth extract, the father was father was John Ormonde, an ironmonger, living at 69 Dundee Loan, Forfar. Shortly after the birth, Jane moved (was sent?) away to London and Kenneth was brought up by his grandparents James and Eliza Lindsay. What subsequent interaction Kenneth had with his birth parents is not known.

A little diligent research has enabled me to piece together (hopefully correctly) various snippets of information and to find my hitherto unknown uncle and relatives. 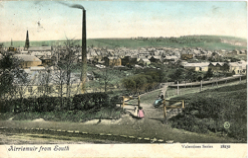 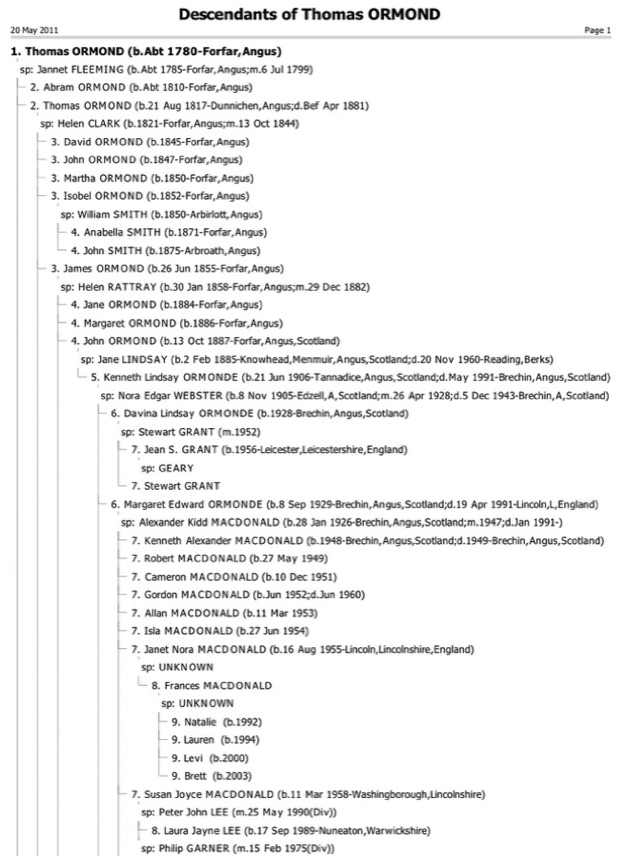 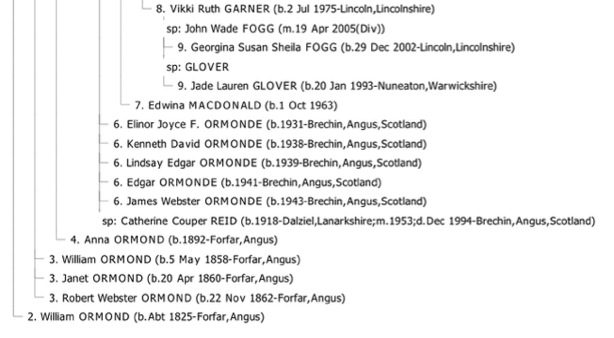 Thomas was deceased at the time of the marriage of his son James in 1882. His wife, Helen, is living with her daughter Isabel and family.

James was married in December 1882 at 63 Dundee Loan, but was actually resident at 20 Smith St, Forfar.

In the 1911 census still living at 69 Dundee Loan, Forfar is James Ormond, 55, mangle worker in a jute factory; wife Helen, 53; and daughter Anna, 19, single, children's nurse - all born Forfar. Helen had given birth to five children, four of whom were still living at the time of the census. I am thus missing one child - possibly born after Anna in 1892 or between John and Anna.

Given that his father and brothers and sisters were working in the linen trade, it is strange that John did not also enter this field and instead became an ironmonger. Perhaps, after the birth of Kenneth, he was, like his paramour Jane Lindsay, persona non grata in the family home and was thus forced to take up a different trade.

In any event, on 16 Jan 1911 John Ormond, aged 23, single, from Forfar arrived in Ellis Island, New York onboard the ship Columbia which had departed Glasgow on 7 January. In the manifest his name was given as James, but this was crossed out and John substituted. His occupation was given as salesman, but that was also crossed out. The name and address of his nearest relative in Scotland was given as his father (no name) at 69 Dundee Loan, Forfar. He paid the fare himself, had never been to the US before, and was going to 182 Chestnut St, Brooklyn. He was 5ft 9in tall and had a dark complexion, dark hair and blue eyes.

Between 1917 and 1920 he married Margaret Buchanan. In the 1920 census for Manhattan Assembly District 9, New York, living at 62 West 102nd Street, we find John Ormond, 31, born Scotland as were both parents, married, employed as a salesman, immigrated 1911; wife Margaret, 30, immigrated 1910; and her sister Elizabeth Buchanan, 25, hotel waitress, immigrated 1913. Both parents of Margaret and Elizabeth were Scottish.

The family is not yet found in the 1930 census and do not seem to be in any passenger records to the UK. However, in 1940, John was a hotel waiter aged 51 living in his own house in Lake Avenue, Smithtown, Suffolk, New York with Frieda, 39, attendant at the State Hospital, born New York; and James R., 15, born New York. The census says he and his parents were born in England (Scotland has been crossed out) and he had the first papers for citizenship. They were also living in the same house in 1935.

Thomas Ormond Snr was born 27 October 1776 in Rescobie to John Ormond, a farmer, and Elizabeth Soutar who married on 28 April 1770 in Dunnichen. He married Jane Fleming (various forms of name) who was born in 1783 also in Rescobie and who died in October 1877 in Forfar. Thomas himself died on 23 February 1863 at Nursery Feu, Forfar in the house he built there. The informant was his son John. The couple had 11 children between 1800 and 1826. Thomas was a linen warper and clearly moved around the county as the children were born variously in Dunnichen, St Vigeans, Arbroath and Forfar.

His sons Abram and John were apparently successful businessmen and Thomas Jr. was a renowned poet. His daughter Elizabeth (second of the name as their eldest child born in 1800 presumably died before 1814) had ten children, the second to youngest marrying David McKenzie who worked most of his life in India. His son John went to North America on an adventure and settled there along with his descendants.

Thomas Ormond was born on 21 August 1817 in Dunnichen, Angus, one of 11 children of Thomas Ormond and Janet Fleming. He married Helen Clark on 13 October 1844 in Forfar and the couple had eight children between 1845-1862. Thomas died of cancer on 20 August 1879 at 42, South Street, Forfar and the informant was his son John.

Although a warper of yarns in a linen factory, Thomas was quite a well-known poet - as were a good many other Scots working in different industries and trades according to a book published in 1881 entitled Modern Scottish Poets. The index lists him by name (with his dates), by place (Dunnichen) and by occupation (weaving). The short biography for him is as follows:

"Thomas Ormond was born in 1817 at Whitefoot Burn, in the parish of Dunnichen, Forfarshire. While still young he went to Forfar, where he learned the weaving trade. On the decay of the handloom, he was employed in one of the factories for which the town is famed, and continued in the finishing department of the firm of Messrs John Lowson & Son, until struck down by an incurable disease of his stomach. He was much esteemed by his employers and fellow-workers, who on one occasion presented him with a watch and chain, and collected a sum of money sufficent to supply his wants, and thus, in a measure, soften the days of his severe affliction. He died in 1879. His happiest efforts are in the mildly satirical vein, and there is an absence of malice or ill-nature in even the keenest of his pieces. Many of his verses are possessed of genuine pathos, and appreciable humour."

The book gives two examples of his poems. His works, a portrait and the watch were on display in the Forfar museum - the drawing of him in the Portrait Gallery of Forfar Notables was done by John Young, but the portrait is by an unknown artist, though probably taken from the drawing. The image at right is his wife Helen Clark.

Kenneth’s surname is spelled Ormonde on his birth extract, as well as his marriage extract; though his ancestors appear to have been simply Ormond. Where the name Kenneth came from is not known - it is neither a name in the Lindsay family or the Ormond family. As shown on Kenneth’s birth extract, his father was John Ormonde, an ironmonger, living at 69 Dundee Loan. John was born 13 Oct 1887 at 19 Dundee Loan, Forfar, Angus. His parents were James Ormond, factory linen worker, and Helen Rattray who married on 29 December 1882 in Forfar. James was born on 26 June 1855 in Forfar to Thomas Ormond (born 1817 in Forfar) and Helen Clark - they married on 13 October 1844 and had eight children between 1845-1862. Thomas was a son of Thomas Ormond and Janet Fleming who married in Dunnichen, Angus on 6 July 1799. Helen Rattray was born on 30 January 1858 in Forfar and died there in 1926. She was the daughter of William Rattray and Margaret Ramsay.

On his marriage to Nora Edgar Webster on 26 April 1928 in Linrathen, Angus, Kenneth was a joiner living at 41 Victoria St, Kirriemuir (in the family home of his grandparents and half-siblings). His marriage extract states that his parents were John Ormonde, ironmonger and Jane Ormonde, Mrs Lindsay.

Nora Edgar Webster was born on 8 November 1905 in Edzell, Angus to David Webster, a shepherd, and Mary Paterson Ford. At the time of her marriage Nora was a clerkess living at Longdunn, Linrathen, Angus. She died aged 38 in Brechin, Angus on 5 December 1943. Her mother, Mary, was born on 9 September 1868 in Marykirk, Kincardineshire to Peter Ford and Margaret Seivewright. Mary died in April 1953 in Kirriemuir, while her husband David died there in December 1938.

In 1953 Kenneth married Catherine Couper Reid in Montrose, Angus. At that time he was a joiner, in Brechin, and a widower with four children from his first marriage still living at home. Catherine was born in 1918 in Dalziel, Lanarkshire and died in Brechin in December 1994. She was the daughter of Thomas Morton Reid and Isabella Duguid Cooper who married in 1914 in Inverbervie, Kincardineshire. Thomas was born in 1886 in Dalziel and died in January 1942 in Brechin. Isabella was born on 8 May 1885 in Montrose and died on 24 September 1961 also in Brechin. She was the daughter of James Kidd Couper (1853-1926) and Catherine Mollison Duguid (1854-1937).

Kenneth is buried in Brechin cemetery together with his two wives Catherine and Nora.

As noted at the top of this page, Kenneth Lindsay Ormonde was born on 21 June 1906 at Newton of Inshavan, Tannadice to Jane (Jean) Lindsay and John Ormonde.

The tree below gives the descendants of Thomas Ormond, the earliest found in the line. 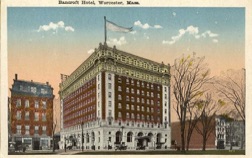