Rait Castle had the honour of having a boat named after it! In my perusal of local newspapers for mentions of Rait Castle, the castle, I found many references in the 1920s and 30s in both the Scottish and English press to a vessel of that name and the amount of white fish (cod, halibut, but especially herring) landed at Nairn, Banff, Inverness and elsewhere in Scotland and England over the years. Rait Castle is often mentioned as the best-fished boat (i.e. bringing home or landing the largest catch.)

According to the Scottish Built Ships website Rait Castle was a fishing drifter built in 1912 by Rose Street Foundry & Engineering Co. Ltd in Inverness at the Thornbush Slip yard. Rait Castle, Official Number 132787, had a length of 88ft, a breadth of 18.7ft and a depth of 8.8 ft with a tonnage of 84 grt/33 nrt. The engine of the wood screw steamer was built by the same company  and was a T.3cy. 27nhp 1-Screw. The first owner was J. M. Main Sen. et al from Nairn with the ship registered on 20 May 1912 in the port of Inverness with the Fishing No. INS303. The subsequent owner was John Wood of Portnockie and Rait Castle was registered in Banff in 1938 with the number BF406. Rait Castle saw Admiralty Service in the 1st World War, as well as in the 2nd World War. The ship was broken up in 1951.

There is an item relating to the launch in the Highland News for 6 April 1912 under the heading 'Launch Today'. "The launch of a new steam drifter, Rait Castle, takes place at the Thornbush Slipway today at two p.m. This is the eleventh drifter constructed by the Rose Street Foundry Co., and is to be fitted with triple expansion engines  8½ in., 14 in., and 25½ in. by 18 in. stroke, and boiler 9 ft. 3 in. diameter by 8 ft. 3 in. long, for 180 lbs. working pressure. The vessel is 85 ft. long, 18 ft. 2 in. beam, and 9 ft. 6 in. draught. The drifter is for Messrs, James Mein Main and others, of Nairn, and Bailie Mcewen will introduce Miss Mein Main, who is to perform the launching ceremony.

The launch was also picked up  by The Scotsman for 8 April 1912 under the heading 'Launch at Inverness'. "The steam drifter Rait Castle was launched at Inverness Harbour on Saturday afternoon [6 April]. It was constructed to the order of Messrs James M. Main & Company, Nairn, by the Rose Street Foundry Company. The vessel is 85 feet in length, and is fitted with triple expansion engines. Bailie Macewen presided over the launching ceremony, and the vessel was named by Miss Mein Main, who was presented with a gold watch as a souvenir of the occasion. The Rait Castle is the eleventh steam drifter constructed by the Rose Street Foundry Company within quite a short period."

A couple of days later there was a piece in the Northern Chronicle and General Advertiser for the North of Scotland dated 10 April 1912 under the heading Launch of Steam Drifter. "On Saturday [6 April] the eleventh steam drifter built by the Rose Street Foundry and Engineering Company was launched from the slipway at the Thornbush. The launch, which was successfully carried out, was witnessed by large crowds on both banks of the river. Bailie Macewen introduced Miss Main, who was to perform the christening ceremony. He said that he had been present at many launches from that yard, and he had always been glad to be there because every fresh launch was a sign of increasing prosperity in Inverness - (applause). He hoped there would be a great many more launches. He had every confidence that the vessel about to be launched would be as successful as those that had been launched from the same place - (applause). Miss Main said it was a very pleasant task to christen such a handsome vessel. The launching of drifters was becoming quite a familiar affair in Inverness, thanks to the enterprise of the Rose Street Foundry Company. She hoped the vessel would prove a profitable venture to the owners and a credit to the builders - (applause). As the drifter left the ways, Miss Main dashed a bottle of wine against the bows and named her the Rait Castle. Mr S. Hunter Gordon, manager of the Rose Street Foundry, presented Miss Main with a gold watch as a memento of the occasion. The Rait Castle is to be fitted with triple expansion engines, 8½ in., 14 in., and 25½ in. by 18 in. stroke, and boiler 9 ft. 3 in. diameter by 8 ft. 3 in. long, for 180 lbs. working pressure. The vessel is 85 ft. long, 18 ft. 3 in. beam, and 9 ft. 6 in. draught. The drifter has been built for Messrs, James Mein Main and others, of Nairn.

According to the Angus MacLeod Archives, it appears that at the outbreak of the 1st World War, steam drifters were required to return to their home ports, where they were requisitioned by the Admiralty for naval use and war service, and given a Pennant Number. Where the boat went, the crew went, and they became part of the Royal Naval Reserve as the Fishery Reserve. The port fishing number was replaced with the letters HMD (His Majesty's Drifter), but in most cases the name remained unchanged. Some steam drifters are recorded as being used as 'anti-submarine net vessels' and fitted with either a '3 or 6 pdr gun' for self-defence. Two types of nets were used by these vessels. The fixed net was used to provide an underwater barrage to prevent submarines gaining access to an area. Other nets were used in the same way as if they were fishing, except they were trying to mesh the submarine, or at least snare its propellors if one was suspected of being in the area.  Other steam drifters were recorded as having minesweeping duties, being used for boom defence or as patrol vessels.

Quite what role the Rait Castle played during the wars is not known - I could not find it various lists of Pennant and HMD Numbers and RN requisitioned ships. But since there are no references in the press as to the amount of fish it caught and landed during the war time years, then presumably it was occupied in other non-fishing tasks. It seems that not so many drifters subsequently saw service in the 2nd World War, but evidently Rait Castle did. One thing I did find, however, is the crew list for Rait Castle dated 1915 by which time it had presumably been requisitioned. 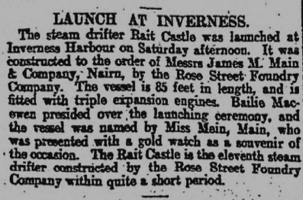 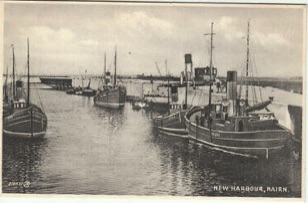 I was disappointed not to be able to find any pictures in the press or online of the Rait Castle, though there were several of sister ships. However, following up a lead provided by Fishing Boat Heritage who informed me that there was a picture of her in the book "Steam Drifters Recalled: Spey to Shetland and Stornoway", I am indebted to the Buckie & District Fishing Heritage Centre in Buckie, Banffshire who have sent me photos of the ship from the book with both the Inverness registration as well as the Banff one. Some additional information from the Centre's cards was also provided!