According to the results of my recent, second, DNA test this time done by BritainsDNA I have a copy of the red-head variant Arg163Gln in my MC1R gene. This is a weak variant and while I am a carrier of the red hair trait, it is highly unlikely I have red or strawberry blond hair (true!) but I may have passed the trait on to my children. The diagram shows my copies of MC1R and what amino-acid I have for each of the 36 red-head variants tested. The numbers in the middle show the position of the amino acids. On the right hand side is a list of the amino acids at these positions in the versions of the protein that cause eumelanin production. I have the amino acid Glutamine at position 163. This is the red-head variant known as Arg163Gln and considered to be a weak variant.

You inherit one copy of chromosome 16 from your mother and

one from your father. At one end of chromosome 16, lies the

controlling which type of melanin is being produced by melanocytes

- specialised cells that produce melanin. There aretwo types of

melanin: eumelanin and phaeomelanin. If your cells produce mostly eumelanin, you will have

dark hair and dark skin, whereas if your cells produce mostly

phaeomelanin, you will have red or strawberry blond hair, freckles

and light-coloured skin. Genetic variants that cause red hair are

recessive, so for there to be a red haired child, both parents must

carry at least one copy of a red-head variant to pass on. This is

decrease the amount of black pigment produced and thus give red

the people of Northern Britain are more commonly red-headed than

people elsewhere. It could be a Celto-Germanic trait. Yet having

thousands does not allow accurate figures to be deduced for

regions of Britain and Ireland, but we are starting to get a picture

of carriers of the variants throughout the British Isles. These

Arg160Trp and Asp294His. Although the numbers are too small to

provide accurate figures of red-heads within all the regions

of Britain and Ireland, using samples with all four known

grandparents from the same country it is possible to get a

preliminary picture of the red-headed nations. The Scots are

almost certainly the highest percentage per capita in the world of

are carriers. Three varieties of red hair variants are the most

common – two of them are probably descendants that lived in

west Asia some 70.000 years ago, while the third descends from a 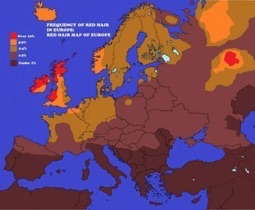 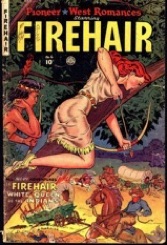 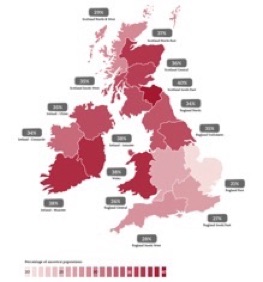 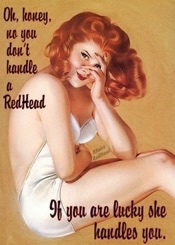 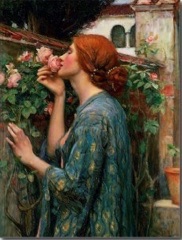 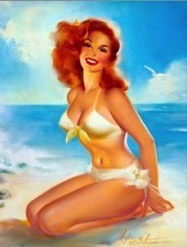 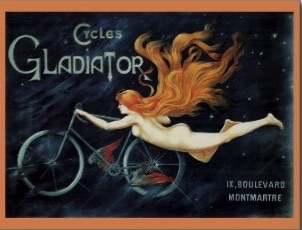 Then we have Emily Pritchard, a PhD genetics student at Edinburgh University, who has postulated that in areas where summer temperatures were cooler, and winter days were shorter, people with ginger hair were more likely to survive and evolve. She argued that redhead’s pale skin provided an evolutionary advantage as it allowed the body to produce large quantities of Vitamin D. Thus Scotland’s poor climate was responsible for the high frequency of the ginger mutation. The experts believe that the gloomy climate there has seen a deliberate genetic adaptation. Essentially this means that red hair helps to take advantage of sunny days and allows the body to absorb more vitamin D.

Scientists also believe the ginger gene showed up 50,000 years ago after humans left Africa for colder climates and the V6OL allele gene made skin lighter as humans got less vitamin D from the harsh African sun. However it brought with it health risks as it is commonly associated with melonoma- the deadliest form of skin cancer. The discovery was made after study of gene evolution of 1,000 people from Spain. Study author Dr Saioa Lopez said: ‘As a consequence of depigmentation there has been a collateral damage consequence to health. This can be reconciled if we assume that melanoma is typically a post-reproductive disease, and consequently should have little effect on the individual’s genetic contribution to the next generation.’

A previous study found more than 20 million people in the UK and Ireland have genes that can cause red hair. The researchers created the first-ever map detailing the distribution of red-headed genes across the two countries, showing exactly where red heads are most concentrated. The most red-headed part of Britain and Ireland is the South-East of Scotland with Edinburgh as a red-hotspot where 40% carry one of the three common red hair gene variants. But the biggest surprise revealed by the research is just over 34% of the population of parts of the north of England are carriers, making Yorkshire and Humberside as red-headed as Ireland. [My comment - the Danes were there for a long time.]

The study was based on data from 2,343 people who have undergone DNA tests to learn more about their ancestry. Researchers looked at three different variants of the MC1R gene, which causes red hair. According to BritainsDNA, those with 151-Cysteine-red have a 70,000 year old variant that probably arose in West Asia; those with 160-Tryptophan-red are descendants of someone who probably also lived in West Asia 70,000 years ago; and 294-Histidine-reds belong to a much younger group who come from a European who lived about 30,000 years ago. In order for a child to develop red hair, both parents must be carriers of one of these red-hair gene variants. But even then there is only a 25% their child will be born ginger. Around 6% of Scots have red hair, or about 300,000 people. Of the English, about 4% - around 2.1 million people - are red heads.

Theories abound though as to the red head origins. According to a leading academic from the University of the Highlands and Islands’ Centre for Nordic Studies, Professor Donna Heddle, the Vikings who invaded Scotland in the 8th century were red-headed rather than blond and it is they who were responsible for transforming Scotland into the world’s ginger capital.

According to an article in The Scotsman, Heddle says “The perception that the Norse were blond is nothing more than a prevalent myth. Genetically speaking, the chances of them having blond hair weren’t that likely. The chances are that they would have had red hair. Interestingly, if you look at where red hair occurs in the world you can almost map it to Viking trading routes.”

While only about 0.6% of the world’s population has red hair, around 13% of Scots have rust-coloured locks, with an estimated further 40% carrying the recessive redhead gene. It appears that the only other density of red hair which compares to Scotland and Ireland is in Scandinavia and if you look at where the red haired patterning is both in Scotland and Ireland, in particular, it is very much around the areas where Vikings settled. Research has shown that 60% of the DNA of modern males on the Orkney Islands, where there is a particularly high proportion of redheads, is Norwegian - pointing to genetic influence.  [My comment - I wonder what percentage of Russians have red hair since the Scandinavians (Swedes) explored, traded and settled there extensively. Also what about Normandy - Rollo and his Norsemen?]

However, not everyone agrees with Heddle’s theory. Dr Jim Wilson, an expert in genetic ancestry research at Edinburgh University, remains unconvinced by the idea that Norse raiders are at the root of Scotland’s abundance of red hair. He notes “There are redheads in Scandinavia and there doubtless were redheaded Vikings. Redheadedness is a north and western European trait, but the pattern of redheads in the British Isles is more consistent with the ancient indigenous Celtic inhabitants who were here before the Vikings and the Anglo-Saxons. The Vikings maybe brought a few red-hair genetic variants over with them, but the majority of redheads were already here.”

There are, of course, some famous celebrity and historical redheads. including Napoleon, Cleopatra, Christopher Columbus, Oliver Cromwell, William the Conqueror, General Custer, umpteen US Presidents, Marilyn Monroe and some famous Scots such as Rob Roy, Bonnie Raitt, John Raitt, Mary Queen of Scots, Ewan McGregor. The Red Head and Proud site has some galleries of such individuals (though not Helen of Troy) - we (and I use that loosely) are in good company! 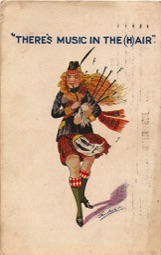