The Old or First Statistical Account of the parish of Glenisla is dated 1792.

By the Rev. Mr James Donald.

GLENISLA derives its name from its local situation, being placed in a glen through which the river Isla runs. — From the head of this parish to the foot, taking a straight line, it measures about 18 English miles, but if all the windings of the river are taken in, it measures precisely 25 miles and one furlong. Its breadth, at an average, will not exceed 2 miles.

The Isla, which takes its rise from Caan-Lochan, formerly a deer forest of the family of Airly, runs through the middle of the parish. This river abounds with trout of a tolerable size; there are also salmon to be found in it, though they are prevented from getting far up by a fall of water below the mil! of Craig, measuring betwixt 70 and 80 feet perpendicular, called Reeky-Linn, from the smoke which constantly ascends from the water. This fall makes a very grand appearance at all times, but more particularly when the river overflows its banks.

Soil, Climate, Etc.—The soil is in general of a light nature, and full of stones. In the lower part of the parish, however, where improvements are carried on, it appears to be deep strong loam, producing good crops of corn and grass. In the upper part, lime stone is to be got in great abundance from three different quarries. But the expence of quarrying and burning prevents the inhabitants from reaping great benefit from it. Some of the more opulent of the tenants drive marle from the Loch of Kinnordy, about 9 miles distant, which manure turns out to very good account.

The air is very pure, and the people in general very healthy. The healthiness of the people, however, may be ascribed to their manner of living. They are not pent up in houses, nor employed in sedentary occupations like many others, but roam at large in the open air, tending flocks of sheep and cattle. Several instances of longevity are to be found in the parish; particularly one man in his 94th year, still vigorous and retaining all his faculties, another 82, and a third 76. During the summer months, it is very sultry, but frosts generally set in by the end of August, and the winters are commonly very severe.

The people, especially in the upper part of the parish, are late in beginning to sow, owing principally to the frosts which keep the ground long, particularly after a severe winter. It is often the latter end of March or beginning of April, before the feed-time is begun. This, of course, prevents the grain from ripening soon; so that it is frequently the middle, and often the end of November, before the crop is all got in.

The frost mists do much hurt here, particularly on the river side. They seem to manifest their noxious quality first on the potatoe stems. Some fields of barley have been rendered almost useless by them. The barley takes a deadly whiteness after this happens, and the kernels when unhusked, immediately after the frost, are soft and watery, and in a short time grow shrivelled and dry. Oats, when frosted, acquire in a few days a bluish cast. These frosts prevail here mostly in the month of August.

No exact register of baptisms and marriages has been kept here for many years past; so that from what records belong to the parish, little material can be learned. From these records it appears that for 9 years preceding 1792, there were 236 baptised, and 93 couples married.

The greater part of the inhabitants have small farms, with a considerable extent of pasturage annexed to them. About 54 of them are small proprietors or portioners, and a great part of these occupy their lands themselves. There are just now in the parish 3 blacksmiths, 8 weavers, 7 taylors, and 4 wrights. What is remarkable, there is not a shoemaker in the parish. All the inhabitants are of the established church excepting 8 Non-jurors, 5 Catholics, and 1 Burgher Seceder.

The general character of the people is, that they are humane, and when they form an attachment to a person, will exert their utmost efforts to serve him. They are not indeed so industrious as could be wished. The summer months are mostly spent in providing fuel and tending the flocks; while the winter months are mostly consumed in burning this fuel. With respect to their morals, they are punctual in attending on public worship, and as decent in their behaviour in other respects, as their neighbours around them.

Church and Poor.—The value of the living is L. 55:11:1 4/12 sterling. The glebe and garden may be worth about L. 3 sterling. The king is patron of this living. The manse and church are very old.

The number of poor who receive alms from the kirk-session is about nine. The yearly sum expended for their relief will, not exceed L. 12 sterling. This sum is raised from the Sunday collections. What further support they stand in need of is supplied by charitable and well disposed patrons.—The funds belonging to the poor do not exceed L. 40 sterling. —By some old records it appears, that in the year 1704, the Sunday collections did not exceed 3d. a week, now at an average they amount to 3s. 6d. There are no travelling beggars belonging to the parish; but in the time of sheep shearing it is much infested with vagrants from adjacent parts of the country (The price of barley and oats is generally regulated by the Dundee market. Indeed the grain produced in this district is not in sufficient for the consumption of the inhabitants. Oat meal generally sells at 15s. and barley meal at 10s, and 10s. 6d. per boll of 8 stones of 16 lb.—Beef, mutton, and pork, is no less than 3d. per lb. of 16 oz.—The price of a pig is 2s. 6d.—of a hen 8d —of a duck 6d. and of a chicken 3d. Butter is sold at 6d. in summer, and when failed, at 8d. per lb. of 22 ounces.—The stone of cheese is generally 5s. but the price varies according to its richness and age. Ewe milk cheese is sometimes fold at 7s. per stone.

The wages of men-labourers are generally 1s. per day, from March to September, with maintenance. The women seldom hire by the day, except in the time of spinning wool, when they receive 3d. per day with maintenance.

Rent and Produce.—There is but a very small part of the parish inclosed. Indeed one of the heritors, sufficiently aware of the advantage and propriety of improving ground covered with heath, has inclosed a good many acres of muir ground, adjacent to his house, with fir and birch trees, which presently appear to be in a very thriving state. Would his neighbours follow his example, the country would not wear the bleak aspect it presently does.—The best arable land lets at about 20s. per acre, but to this is annexed the privilege of hill pasturage. The rent of the parish may be between L. 600 and 700 sterling. This, however, is varying every year. The heritors, as has been mentioned, are 54 in number, of whom about 32 reside in the parish. It is impossible to ascertain the number of acres contained in it, the arable ground bears but an insignificant proportion to that which is covered with heath. The plough mostly used in the upper part of the parish is the old Scotch plough, generally drawn by 4, sometimes by 6 horses, yoked a breast of one another;—what is peculiar, the driver always travels backwards. This mode, no doubt, has been adopted, on account of the weakness and small size of the horses, which are mostly of the Highland breed.—In the lower part, the English plough is for the most part used, and is drawn by 2 horses. One man holds and drives.

The vegetable produce is bear and oats, no wheat is sown; turnips, and potatoes are raised in the lower part of the parish; in the higher part of it turnips are but now introduced, and indeed it is impossible this crop can turn out to advantage, while the inhabitants allow their sheep to feed promiscuously after the corns are put into the barn-yard. With respect to animal productions, the country abounds in black cattle; these are generally of a small size, but very durable; the largest will not exceed the weight of 18 or 20 stones of 16 lb. The number in the parish at present amounts to about 1696. The sheep, which are generally kept in the hilly part, are but of a small size; some of the inhabitants, however, go yearly to the south of Scotland, where they purchase numbers of black faced sheep, which turn out with them to good advantage. The precise number of sheep cannot be ascertained. The country abounds with muir fowl, and several gentlemen keep shooting quarters, which they regularly attend during the season. Here are hares and foxes in abundance. Ptarmigans are also to be found at a place called Caaness, towards the head of the parish.

Miscellaneous Observations. —The roads are in very bad repair, and must continue in the same state till proper overseers are appointed to inspect them, and the road money of the parish appropriated to their repair. The bridges are only two in number (though the extent of water, from the head to the foot of the parish, is about 25 English miles.) Were a bridge built centrically between these two, which are 9 miles asunder, it would be a considerable advantage to the country at large, and free many individuals from inconveniencies they presently labour under. Indeed there are some funds for a bridge already, and subscriptions might be expected to complete the scheme, were there any public spirited person to set the work on foot.

Beside the parochial school, the salary of which is 100 merks, there is a school erected by the Society for propagating Christian Knowledge at Folda. The teacher draws yearly from the Society L. 10 sterling. Both schools just now are in bad repair, and truly it is difficult to get these matters properly adjusted among such a number of heritors. (There are the remains of two castles, viz. the castle of Forter and the castle of Newtown. A great part of the walls of the former remain almost entire, but only the vestiges of the foundation of the latter are to be seen. Both belonged to the Ogilvies of Airly, and in 1641 were demolished by the Marquis of Argyle; an injury the family of Airly did not fail to resent.) 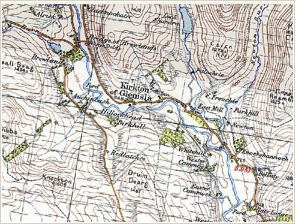 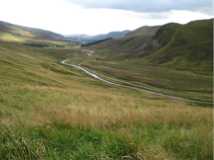 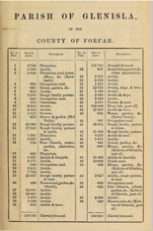 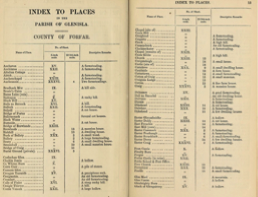 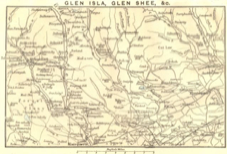 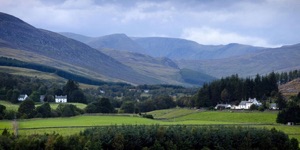