In April 2013 I was contacted by someone who currently had in his possession a King James bible published in 1679 and printed in Edinburgh by Evan Tyler (Printer to the King’s Most Excellent Majesty), the inscription on the spine of which says “Anniston Family Bible”. On the inside front cover there is an inscription on a thin card book plate which reads Lt. Col. Rait. and below this is printed the name Lady Clementina Rait and underneath Anniston. Inside the bible 'Anniston' is stamped a number of times in and around the introduction to the bible, and on other pages, such as the page for the Psalm of David, the name of Lt. Col. Rait is again included.

The King James Version of the bible, commonly known as the Authorized Version or King James Bible, was an English translation of the Christian Bible for the Church of England begun in 1604 and completed and published in 1611. This was the third translation into English to be approved by the English Church authorities and was initiated by James I, who was also, at the same time, James VI of Scotland. It took some 50 years for it to gain supremacy, the Geneva Bible, first published in 1560, being still preferred by Puritans. The Geneva Bible was the first Bible to come to the American Colonies with the Mayflower in 1620 and remained in wide use until the advent of the King James Bible. The last edition of the Geneva Bible was produced in 1644, but the 1679 edition of the King James Bible contained the Geneva notes.

The Anniston bible is a full pulpit sized book, a large folio edition about 12x18in and weighing around 5kg. The black leather is tooled in gold (the spine lettering is also gold) and it has decorative studs and cover lock. It was bound by Patrick Wilson from Arbroath, and appears to be an extremely rare edition – though there are a few leaves missing from both the front and the back. The title page also seems to be missing. With the bible being so old and no doubt well-used, as well as probably changing hands several times over the years, then it is inevitable that there will be wear and tear.

The Anniston volume contains many old two page maps and engravings of Europe, the Holy Land and Jerusalem. The illustrations and maps (all dated 1848) are mostly by the Dutch artist Jacob Savry – with titles and place names in Dutch. Jacob Savry (Amsterdam 1617-1666) was a copperplate engraver whose maps were included in Dutch bibles of the time. He was the grandson of Jacques (Jacob) Savry, originally from Kortrijk, Belgium and who moved to Amsterdam where he died in 1602 of the plague. The Savrys (also Savery, Savary) were a Flemish-Dutch  family of painters, engravers and sketchers. Jacob Snr was a Dutch Golden Age painter, but his brother Roelant was more well known as the court painter in Prague.

The bible also includes the extremely rare map Orbis Terrarum Typus de Integro in Plurimis Emendatus Auctus, Et Icunculis Illustratus which is the world depicted as two hemispheres. This world map, drawn by Nicolaus Visscher in 1657, was the first of several maps which he produced for Dutch bibles in the middle of the 17th century and would become the prototype for Dutch bible maps published over the next 100 years. Australia and Van Diemen's Land are shown, but the north coast of Australia discovered during Abel Tasman's second voyage of 1644 is not yet shown.  Two celestial hemispheres are included, along with a lengthy annotation on the discovery of America and recent circumnavigations (California is shown as an island). The allegorical figures in the corners represent the four continents.

The Anniston bible was purchased by the present owner from someone in Dublin, Ireland and had apparently been in his family for years and was passed down to him from his grandfather.  How the book came to be in that family is not known. It was appraised by Christie’s in London a couple of years ago and in its pre-restoration condition it was valued at £2000 due to the rarity of this particular edition and the fact the history of the Raits of Anniston can be traced to UK peerage (though similar bibles, without the  Anniston connection, seem to be for sale in the USA for in excess of $30,000!) Christie’s advised the Irish owner to get it restored, but, unable to do this, he sold it. The purchaser has just now had it restored to its former glory - the one or two missing pages cannot be replaced, of course, but torn pages have been repaired.

It is interesting to speculate how the bible may have come into the possession of Lt. Col. James Rait (1804-1877) and be termed the Anniston Family Bible and what happened to it after James died. Given the size of the book, and its date, it may well have belonged in a church; though how and when it found its way into Lt. Col. Rait’s possession is not known. It may have been owned by an ancestor and passed down as an heirloom – possibly even George Rait who purchased Anniston House in 1732 and was effectively the first of the Rait of Anniston line. And it may be (even probable!) that the missing pages would have provided the ancestral family history of the Raits of Anniston – since the bible was often the place where such genealogical information of births, marriages and deaths was recorded. If that was indeed the case here, then that is a frustratingly sad and irretrievable loss.

However, the fact that Lt. Col. Rait and Lady Clementina (1819-1848) are the only ones specifically mentioned within might indicate that they were the ones who had the bible bound and labelled as the Anniston Family Bible – though they may, of course, just have had it rebound and the wording on the spine was already there – and it was used as the family bible for their five children. The book could have been a gift from Col. Rait to his wife or possibly a gift to both of them from another family member. And it may have been kept either in Anniston House or even their local church at Inverkeilor where their coat of arms appears above the church door. Inverkeilor Parish Church was built at the end of the 17th century and dedicated to St Macconoc or Conan. It was originally a long, narrow rectangle but in 1732 the Anniston Aisle was built (presumably by George Rait) on to the rear of the church creating the T-plan structure seen today.

The fact that the bible was (re)bound by Patrick Wilson, a well-known bookseller and library and lithographic printer in Arbroath gives some indication of date. Patrick seems to have lived in Millgate Loan, but had a shop in the High Street from 1820 until at least 1852. The Angus and Mearns Directory and Almanac for 1847 carries a full page ad for his services – which includes bibles. Thus  presumably the bible was bound in its present form with spine lettering between 1820-1852 – though since James would only have been 16 in 1820 then it is unlikely that he himself would have commissioned it at such an early date. Although James Rait married Clementina Ogilvy in 1838, the bible may well have been bound before then – and in fact, may have belonged to James alone since the lettering for his name and that of Anniston on the bookplate is in one plain typeface, whereas that for Lady Clementina Raitt is in a smaller, more cursive script, indicating it was added later - possibly after her death.

My assumption is that after James Rait died in 1877, the bible was inherited by his son Arthur John, who succeeded to the house of Anniston. Since his younger brother William had died in 1895 and his own son Arthur Garnet Rait, the last son and heir of the Raits of Anniston, died in 1900 during the Boer War, then after his own death in in 1902, the bible passed from Arthur John to his only daughter Eileen. (Although Kathleen Rait, Arthur’s wife, lived until September 1923 and was styled ‘of Anniston’, the estate, along with the ownership of Anniston House, appears not to have passed to her on the death of her husband, but instead to their daughter, Eileen.) On her death in 1904 aged 24, her aunt, Mrs Agnes Lindsay- Carnegie (eldest sister of Arthur John), succeeded to the estates and was also styled ‘of Anniston’, although she lived in another mansion (Annesley) in Arbroath. Since Kathleen lived on in Anniston House until she died in 1923, then presumably the bible was still there at that time.

Although the estates appear to have been rented out, it is not clear who resided in the house between 1923-1932. In any event, upon her death in 1932 Agnes bequeathed Anniston to her cousin Captain Bruce Ogilvy. She was the last of the line of the Raits of Anniston. In 1933 there was a sale of the antiques, silver, china and pictures in Anniston House and quite possibly the bible, if it was in her possession at that time, was included in this sale which attracted a large attendance of buyers from all parts, including Dundee, Glasgow, Edinburgh and Aberdeen and even from London. Many county families were also represented.

How the bible ended up in Ireland is not known. Possibly it was bought at the estate sale and sold on. On the other hand, it may be that the bible was given to or claimed by Kathleen’s relatives in Ireland after she died. 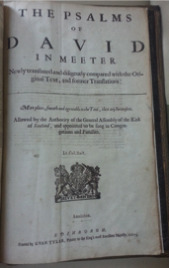 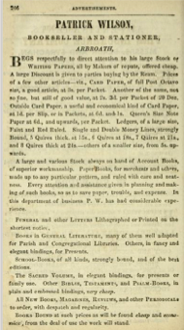 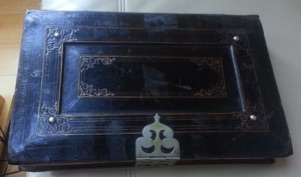 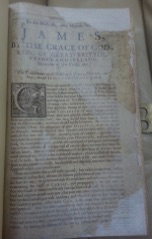