My paternal great grandmother, Isabella Kelman, was born in Marnoch, Banffshire on 4 June 1826. She married Alexander Scorgie on 3 December 1843 in Rothiemay, Banffshire, had thirteen children with him, and died on 10 August 1913 at Hill of Cotburn, Turriff, Aberdeenshire.

Isabella’s parents were William Kelman (1793-1870) of Alvah, Banffshire and Mary Lawrence (or Laurence) (1798-1888) of Fordyce, Banffshire. They married in 1818 in Fordyce and had ten children between 1818-1838. They both died in Aberchirder, Marnoch - as did their son Alexander, his wife and several of their children who all died of tuberculosis within a short time of each other (see blog entry.)  Mary Lawrence’s parents were Alexander Lawrence (1774-1858) and Mary Kelman (1770-1853).

William’s parents were William Kelman, born in Fordyce in 1770 and Isabella Irvine born in Gamrie also in 1770. They married in 1793 and had six children, of whom William was the eldest. Since neither appears in the 1841 census they were presumably deceased by then. William Snr’s parents were John Kelman and Marjory Wilson who appear to have had twelve children between 1767-1792; William being the second born and with a twin brother, George - who may have died given that the same name was used for John and Marjory’s last child.

The 1841 census has an Isabel Kelman aged 15 working as a servant in the household of William Barber, farmer  and his wife Jean at Cleanhill, Marnoch.

The 1851 Census shows Isobel as Head of Household at Dockers Den, Gamrie, Banffshire, farm labourer's wife, aged 24, born Marnoch, Banffshire with sons Charles (5), Alexander (2) and William (although he's unnamed as he's only four weeks old) and visitors Mary Kelman (30) and George Rind (1) both born Kincardineshire - Stonehaven.  Husband Alexander Scorgie, aged 30, born Gamrie, is at Blaikshouse, King Edward, Aberdeenshire, an agricultural labourer ploughman. Who the visitors are is not clear, the age suggests that Mary Kelman could be Isabella’s elder sister, though she was born in Marnoch; George is presumably her son.

The 1911 census for Hill of Cotburn cottage, Turriff, has Isabella Scorgie, 87, widow, born Marnoch; and daughters Isabella, 55, single, housekeeper; and Jane, 44, single - both born Turriff. The census notes she had 14 children, 10 of whom were living. I know only of 13 children - so it looks as though there is a missing child somewhere!

The 1861 census for Barn Hills, Rothiemay, Banffshire has a William Kelman, 65, born Alvah about 1796 as an agricultural labourer in the household of Andrew Duncan, master stone dyker at Hill End of Mayen, Rothiemay. His wife, Mary, 62, born Fordyce, head, ploughman’s wife, is living in South St, Aberchirder, Marnoch with several boarders.

John Kelman’s parents were James Kelman (born about 1709 in Fordyce) and Jean Watson who married in 1731. They had at least six children between 1738-1753 - presumably there were others prior to 1738. Son John was born in April 1747. James’s father was also named James and he and his wife had six children between 1701-1713 in Sandend, Fordyce.

Whether there is a family link between this Mary Kelman and her paternal ancestors and her son-in-law William Kelman’s ancestors is not yet proven - though given that they all came from Fordyce, then there is a strong possibility that they were related.

In the 1841 census for Fordyce-Banff, living at Badenspink is Alexander Lawrence, age 65, wright and Mary Kelman, aged 70, and children George (25) and Jannet (30). Also in the household is Isobell Chisholm (7), George Chisholm (4) and Jane Chisholm (2) - these are Janet Lawrence’s children - she married John Chisholm.

In the 1851 census for Fordyce, living at Croft of Badenspink, is Alexander Lawrance, 76, carpenter and farmer of 10 acres; wife Mary, 80; son George, 36 (working on farm presumably) and George Chisholm, grandson, 13 (presumably working on farm). All were born in Fordyce.

Lawrence has a variety of spellings including Lawrance, Laurance and Laurence. Mary Lawrence was christened in Fordyce on 6 April 1798 and died at South St, Aberchirder, parish of Marnoch on 29 Nov 1888, aged 90. Her parents were Alexander Lawrence (1774-1858) and Mary Kelman (1770-1853) who married on 31 December 1797 and who had six children between 1796-1814.  Alexander was a carpenter, like his father George. George Lawrance was born about 1749 in Fordyce and married Isabel Gregor in 1770, having five children between 1771-1780 - Alexander being the middle child.

On death extract, age is 84, Alexander’s occupation was given as cart-wright, while his father George was a carpenter. The undertaker was George Lawrance who was presumably Alexander’s son. He erected a gravestone in Fordyce churchyard for his parents.

In the 1841 census for Fordyce-Banff, living at Badenspink is Alexander Lawrence, age 65, wright and Mary Kelman, aged 70, and George (25) and Jannet (30). Also in the household are Jannet’s children Isobell Chisholm (7), George Chisholm (4) and Jane Chisholm (2).

In the 1851 census for Fordyce, living at Croft of Badenspink, is Alexander Lawrance, 76, carpenter and farmer of 10 acres; wife Mary, 80; son George, 36; and grandson George Chisholm, 13. George was the executor of Alexander’s will.

Some of the descendants of the earliest known in this line, John Kelman, are given for the five  generations down to my grandmother Helen Scorgie. 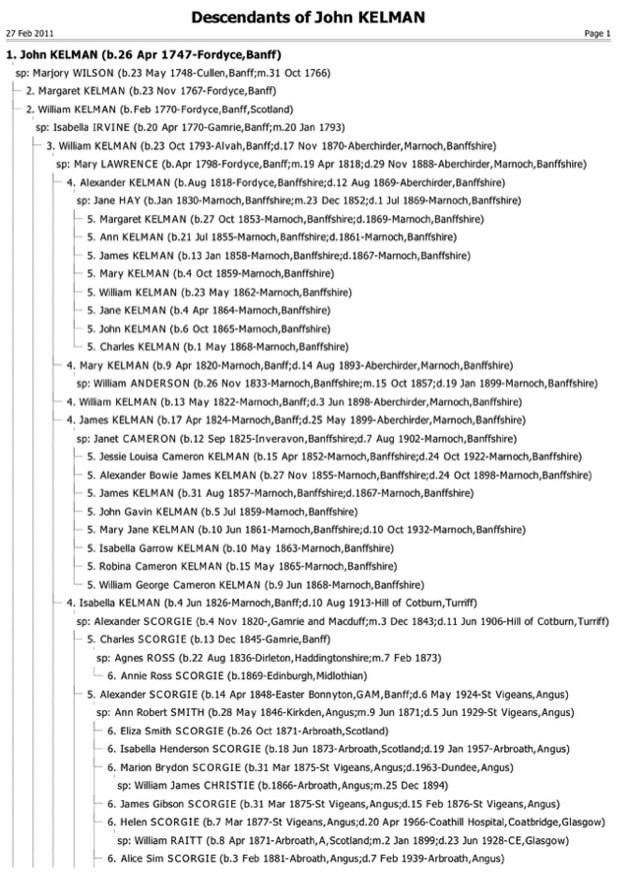 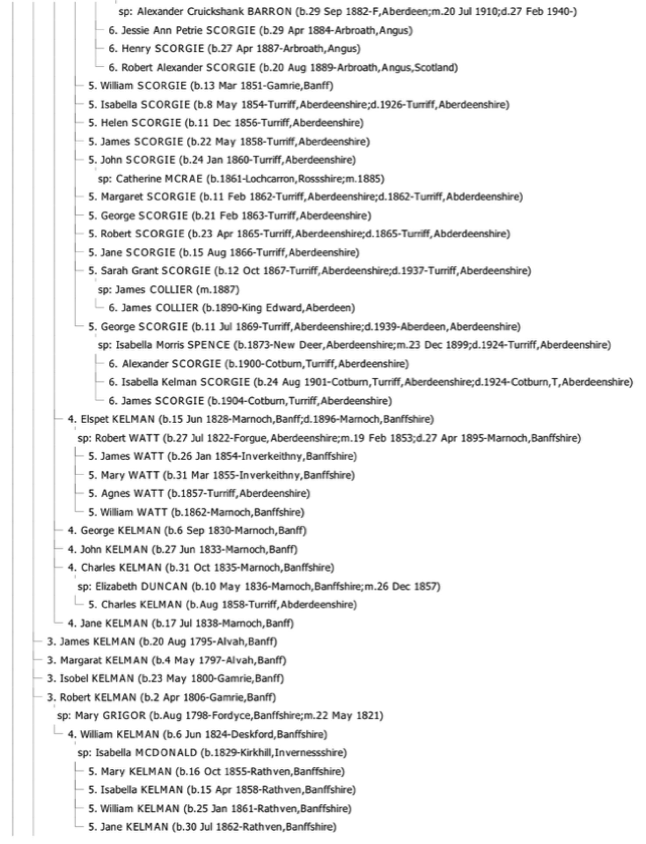