Helen Scorgie was born on 7 March 1877 in St Vigeans to Alexander Scorgie and Ann Robert Smith. She married William Raitt (1871-1928) in Arbroath on 2 January 1899. Interestingly, the announcement in the Arbroath Herald and Advertiser for 5 January 1899 reads "At Bank Street Hall, on the 2nd inst., William Raitt, to Helen, daughter of Alexander Scrogie." William and Helen had seven children between 1901-1915 - my father, David, being the last born. Helen died on 26 April 1966 in Coatbridge, Glasgow - having been living at the time of her death at 13 Kelso Drive, East Kilbride.

In the 1901 census William Raitt and wife Helen were living at 92 Helen St, St Vigeans (Lochlands). He was aged 29, restaurant keeper on his own account; she was 24.

In the 1911 census living at 14 Earlston Avenue, Townhead, Glasgow (Garngadhill) is Helen, 34, born Arbroath (she had been married 12 years and had had six children all of whom were still living at the time of the census). She was living with her husband William Raitt, head, 39, insurance agent, born Arbroath; and children William, 9, at school, born Arbroath; Annie, 8, at school; Mary, 7, at school; Helen, 6, at school; Alice, 2; and Alexander, 1 - all five born in Glasgow.

Alexander Scorgie was born in Easter Bonnyton, Gamrie & Macduff, Banffshire on 14 April 1848 to Alexander Scorgie and Isabella Kelman (who married in 1843). He married Ann Robert Smith (1846-1929) in Arbroath on 9 June 1871, having nine children with her between 1871-1889. He died on 6 May 1924 in St Vigeans and is buried in Arbroath Western cemetery (grave ref I/61) along with five others including his wife Ann Robert Smith.

In the 1861 census for the landward part of the parish of Turriff, Alexander Scorgie, aged 12, born Gamrie, is a cattleman living at 34 Bothey Brackens - he is listed as a servant to the Head, William Drummond. (His father Alexander and family are farming nearby.)

The name Scorgie (including variants) does not appear to be in the 1865 Valuation Roll for Arbroath and St Vigeans which would indicate that Alexander did not move there until after that year - thus between 1865 and early 1871.

In the 1871 census for St Vigeans, living at West Seaton Bothey, St Vigeans is Alexander Scorgie, listed as Head, unmarried, age 22, farm servant born Turriff, Aberdeenshire. Also there are three fellow farm servants, one of whom is John Smith, 19, born Fordoun, Kincardineshire - I wonder if he was a relation of Alexander's wife-to-be Ann Robert Smith?

In the 1911 census for Arbroath living at 11 and a half Dishland St are Alexander Scorgie, 63, coachman in a horse hiring company, born Gamrie, Banff; wife Anne, 64, born Kirkden; and daughters Eliza, 39, single, shop assistant; and Isabella, 37, single, general domestic - both born Arbroath. Wife Anne had been married 39 years to Alexander and had borne 9 children, 7 of whom were still living at the time of the census.

In the 1841 census, Alexander Scorgie is aged 20, working as an agricultural labourer in Midton, King Edward, Aberdeen.

The family is mentioned in some old Aberdeenshire newspaper clippings.....

Under "Selections from Correspondence" a letter by Jessie ?? is quoted. Of the Scorgies she writes: "The mother and daughter Jane died at Cotburn, Isa lives in Turriff and Sally at Mountblairy, while George ( he of the hard hands) carries on the little farm."

(The mother is probably Isabella Kelman and Isa is probably her daughter Isabella Scorgie - sister of Jane. Sally would presumably be Sarah; while George would be the son born in 1870.)

Under "In the Cotburn District" there is a snippet....

"Scorgie's "plaicie" was - and is- nearby. There were Jane, and Sally, and Geordie, near to my own age, with others I did not know. Geordie was a big strong boy, and we smaller fellows envied him his great hard hands when it came to a matter of "pandies" from the schoolmaster. I called and saw him some years ago, and he was just the same hearty chap."

Little is known of the progenitor of this line, James Scorgie. Given that he married Isabella Sangster (1798-1873) on 10 September 1820 in the parish of Gamrie & Macduff and assuming he was of normal marrying age, then he was probably born somewhere between 1795-1800, presumably in Gamrie parish. James and Isabella had at least two children: Alexander on 4 November 1820 (abode Macduff) and Charles Smith on 29 June 1829 (abode also Macduff). However, a William Scorgie was buried on 16 January 1827. The abode is given as Pitgair, Gamrie. Given that William was aged four when he died then he was born in 1822 or 1823. There appear to be no other Scorgies, apart from Alexander and Charles born in that area at that time - therefore, one could assume that William was the son of this James Scorgie and Isabella Sangster, especially as Isabella’s abode at birth was also Pitgair.

James’s occupation was given as quarrier on his son’s (Charles Smith Scorgie) birth extract in 1829 - the name actually being spelled Scrogie; and more specifically as slate quarrier on Charles’s marriage extract in 1866. Not only is his date and place of birth elusive but so is his date and place of death. Since he seems not to be in the 1841 census, then either he died before then (possibly as the result of an accident in the quarry) or perhaps he, like other Scorgies, emigrated to the USA or Canada - though would he have gone without his young family?  His wife, Isabella Sangster, lived on until 1873.

Some records for this time and place have been lost, but it is possible to trace various generations of Scorgies (often with the names James, John and Alexander) back to a James Scorgie in Bruntyards, Gamrie, Banffshire born about 1690 who was the father of Isobel Scorgie born 1708 and James Scorgie born 1709. The successive generations (every twenty years or so) all come from within a three mile radius.

Charles was the second surviving son of James Scorgie and Isabella Sangster, being born 29 June 1829 in Macduff, Gamrie. He married Sarah A. Grant on 12 January 1866 in Knockando, Elgin, Morayshire and they had six children born between 1866-1876. He died on 31 October 1887 in Fordyce, Banffshire. His middle name Smith possibly comes from his great grandmother Elspet Smith who was the wife of John Sangster. Sarah Grant was born on 27 April 1835 in Cromdale and Inverallan and Advie, Inverness, Morayshire to Donald Grant and Margaret McDonald (married in 1834 in Cromdale). Sarah was the eldest of their six children. She died in Elgin in 1909, age reported as 78, having presumably moved back to Moray after her husband died.

Charles’s age on marriage (in 1866) was given as 33, occupation carrier, usual residence Cullen. Father's occupation was slate quarrier. His age is given as 60 on his death in 1887.

In the 1851 Census Charles Scorgie, farm servant, aged 21 was living at Pitgair, Gamrie with his mother Isabella Scorgie, aged 52, widow.

In the 1891 census Sarah Scorgie is a 58 year old widow living at 38 Sand St, Buckie, Rathven, Banffshire, a general worker. With her are children Charles, 20, farm servant; Jane, 15, domestic servant; and granddaughter Annie Forbes, 4, born Boyndie, Banffshire. Quite who Annie is is not clear - presumably she is the daughter of one of Sarah’s daughters. However, there are no births of an Annie Forbes in Boyndie (though there are a couple nearby in Rathven) - and no marriages between Scorgie and Forbes.

The tree below shows the descendants of the earliest known in this line, James Scorgie. 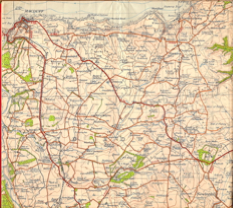 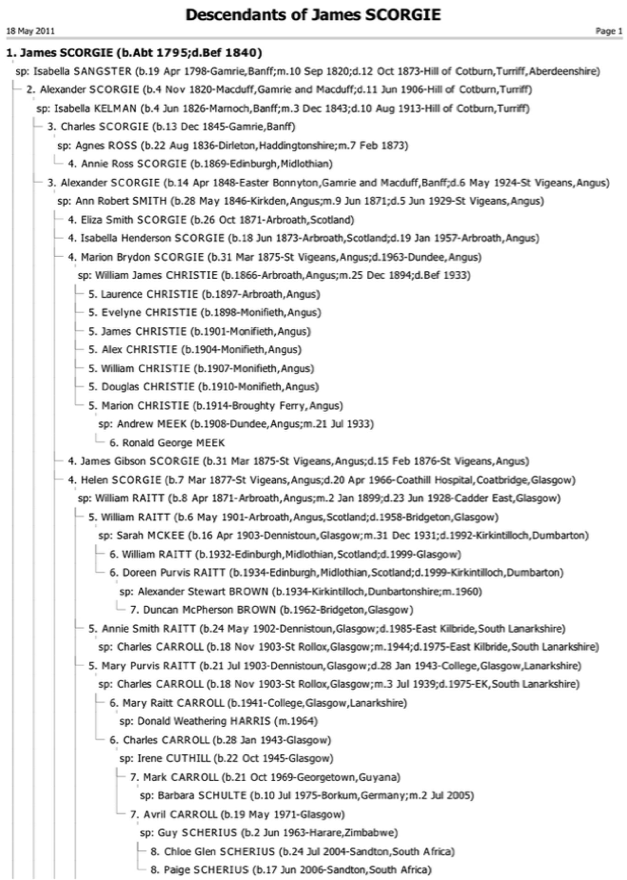 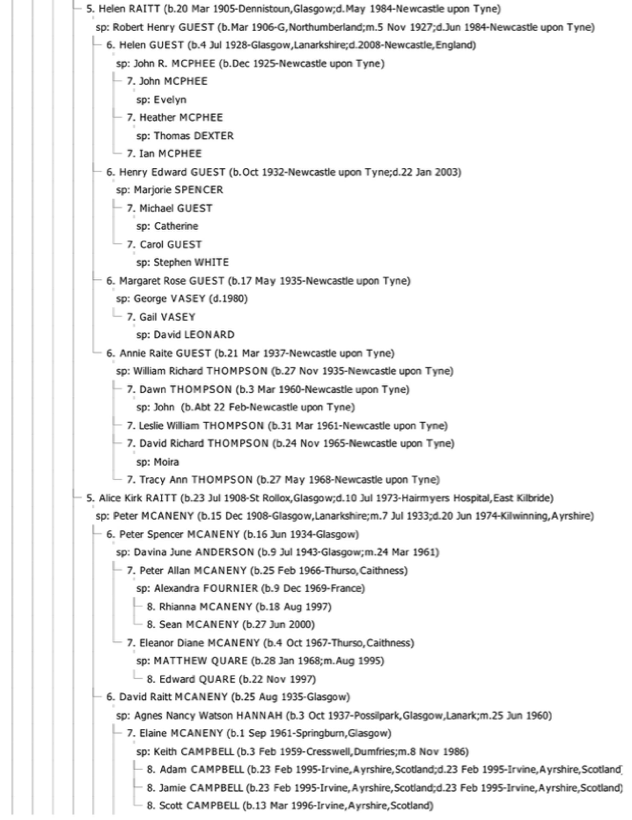 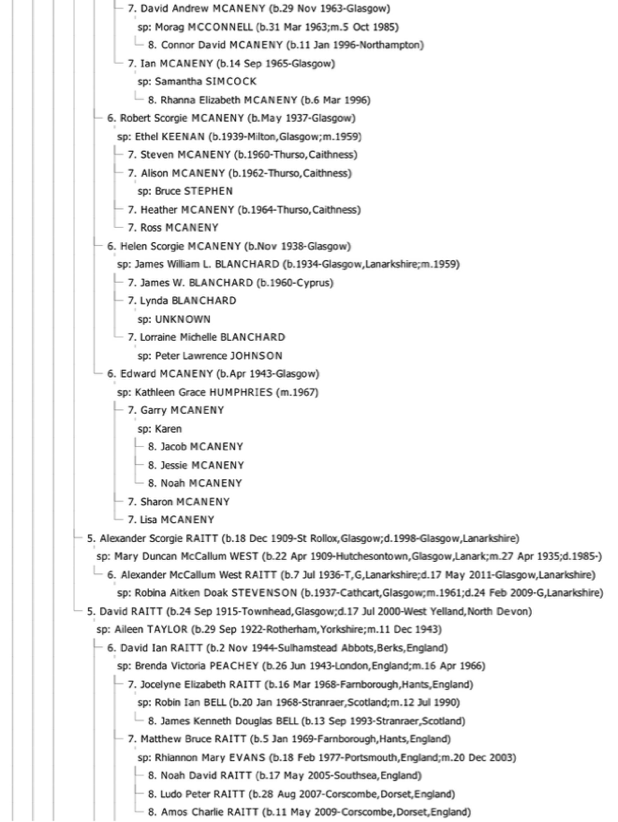 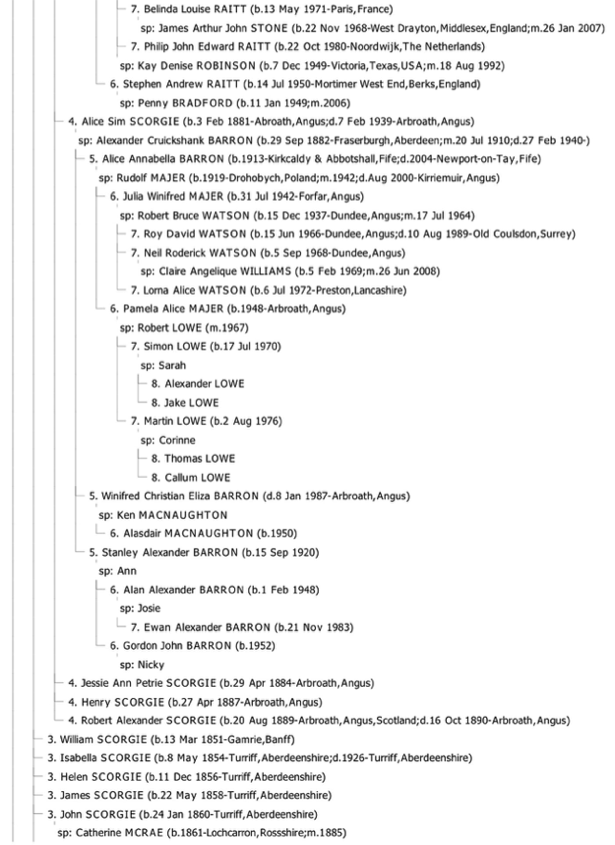 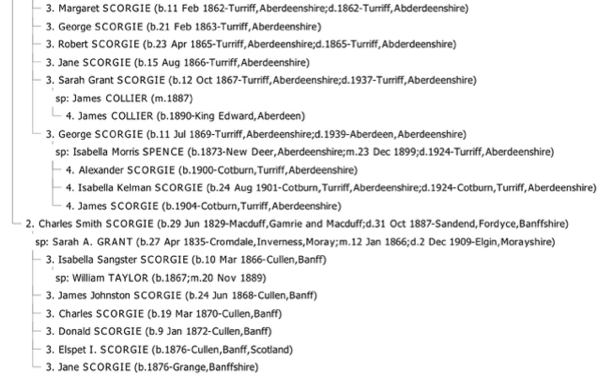 Although the families of Raitt, Purvis and Wilkie are associated with Forfarshire (now Angus), particularly Arbroath and St Vigeans, the male line of my paternal grandmother, Helen Scorgie, came from Banffshire. Her father, Alexander Scorgie, was born in Easter Bonnyton, Gamrie in 1848. At age 12 he was a cattleman on a farm in Turriff, Aberdeenshire, but then came south some time between 1861 and 1871 - presumably for work since farming was often seasonal. However, in 1871 he was still a farm servant living in a bothey in St Vigeans, but by 1881 he was simply a general labourer - though he had had a stint as a spirit dealer’s assistant which was his occupation at the time of his daughter Helen’s birth in 1877. 1891 saw him as lorryman (presumably a horse-drawn vehicle) while his family were all flax spinners. At the time of daughter Helen’s marriage in 1899 he was a (hanson) cab driver, but in 1901 he had the slightly grander occupation of coachman (not domestic)!

Alexander’s father was also named Alexander, born in Macduff, Gamrie in 1820 and dying at Hill of Cotburn, Turriff, Aberdeenshire in 1906. He was a crofter all his life. In 1843 he married Isabella Kelman, born in Marnoch. (Isabella’s brother, Alexander, his wife and several of their children died of tuberculosis as is recounted in a blog entry.) Alexander’s grandfather was James Scorgie who married Elizabeth Sangster in 1820.

Helen Scorgie’s mother was Ann Robert Smith, born in Kirkden, Angus and whose father Benjamin Smith also moved south from Banchory-Ternan, Kincardineshire before he was twenty.