In addition to the various Coats of Arms, early Raitts also have seals. Three are mentioned in a 1904 book on Scottish armorial seals by William Rae Macdonald.

The first and the last are also mentioned in the Descriptive catalogue of impressions from ancient Scottish seals ... from A.D. 1054 to the commonwealth. Taken from original charters and other deeds preserved in public and private archives (by Henry Laing and published in 1850). The Supplement to this also includes the above Master David Raitt as well as:

Writing in the Proceedings of the Society of Antiquaries of Scotland in 1999, Bruce McAndrew discusses in depth the sigillography of the Ragman Roll. The seals, originally attached to the deeds recording the fealties of the Scottish nobility to Edward I of England in 1296, are correlated with their owners. The relevant ones for Rait are given below.

Bain, CDS, II, Appendix III, Nos 1-149 renumbered as 3001-149. These seals are unattached to documents, or only to fragments. They are contemporary with the Ragman Roll, and may have been attached to it, or to other homage records. These seals have not been inspected but have been included to give a comprehensive coverage of the seals listed in Bain's Appendices.

Bain, CDS, II, Appendix III, Nos 150-631 renumbered as 3150-631. Bain refers to them as 'uncatalogued seals'; the vast majority, but not all, were once attached to the Ragman Roll homages.

Joined by platted green and yellow ribbon are

No John de Rathe/Rait found. RR1136 Roger de Rathe is most likely. Clerical error? (Actually, a Johannes Rat is mentioned in one of the Court Rolls of Linlithgow between 8 Oct-5 Nov 1299 - so this could conceivable be the same chap.)

A similar seal to that of Sir Gervaise de Rait was appended to a letter from a number of barons and earls to the Pope in 1301. The seal is that of John de Mohun who bore the same coat of arms as Sir Gervaise (i.e. or, a cross engrailed sable). Details about John can be found on the Heraldic Symbolism page. 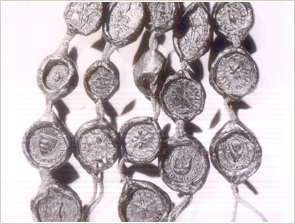 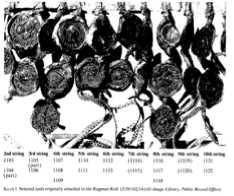 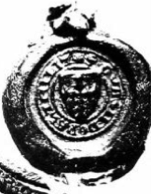 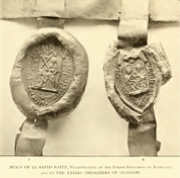 In a charter dated 1427, David Raite is styled the King's confessor and "vicar" of the order of Preachers within the kingdom. As used in that charter and in the foundation deed, vicar and vicar-general appear to be synonymous, and it may therefore be assumed that for at least twenty-seven years David Raite was at the head of his order in this country, but holding his appointment from the Provincial of England. (See also under Religious Raitts.)

The above shows that various Raitts had seals and that these were affixed to documents. We know also that these and other Raitts were either beneficiaries and/or witnesses to a host of charters, often to do with land grants (see especially under Rait lands). So this is perhaps as good a place as any to add a footnote about names and seals and their significance. The text below is paraphrased somewhat from a couple of paragraphs towards the end of the Introduction in Chris Brown’s book The Knights of the Scottish Wars of Independence (Tempus, 2008).

Most of the families discussed or mentioned in many books about Scotland in the 13th and 14th centuries were of fairly minor significance in the political landscape and have left no charter chest collection, just a trail of references in official documents – as charter witnesses for example. However, few documents have a complete list of named witnesses, other than crown charters which still name only a handful of very prominent men. Many documents – regal, ecclesiastical and lay - either make no reference at all to witnesses, have only a small number of witnesses, or name only a selection. These are generally the most prominent persons present and perhaps a family member, the rest of the witnesses  appearing as “et aliis” or similar. It seems likely that these would have comprised the friends, neighbours and relatives of the parties to the document. It is quite possible that some of the witnesses – named or not – had no formal or legal obligation to take part in the process, but were simply men of substance from the neighbourhood whose acknowledgment of a document was considered desirable. Broadly speaking the unnamed witnesses were the sort of people who held land, formed local juries and owed military service. The presence of a specific individual is not proof positive that the person was an adherent of the granter or grantee.

The same applies to sigillography. A considerable proportion of sealed documents have lost their seals – take, for instance, the loss of Sir Gervays de Rate’s seal as well as others from the Ragman Roll. But even of those that have not been lost, very few bear more than the seal of the granter and the grantee and several would seem to never have had either slits or tongues for the application of seals in the first place. Additionally, the presence of a particular seal does not necessarily prove the presence of the seal’s owner. When William Blair resigned the chaplaincy of Heriot in November 1309 he used the seal of the abbot of Dunfermline because his own seal was unknown to the majority. It should not be taken for granted that witnesses to a land charter necessarily had any particular concern with the subject. They may have had other local interests or simply been friends who happened to be present

Somewhat later, we come across the seal of David Raite. In the book Glasgow Memorials by Robert Renwick and published in 1908, there is a chapter on the Black Friars and Grey Friars in Glasgow. The foundation deed for the Friars Preachers was dated 1 May 1454. Apart from the main purpose of the foundation deed, it has also an accessory interest. For its better authentication, and as a guarantee for fulfilment of the conditions, three seals were appended. The first was that of David Raite, vicar-general of the order of Friars Preachers of Scotland; the second was the common seal of the Glasgow convent; and the third, which has disappeared, was the common seal of the city.

Raite's seal is lettered: "S. Vicarii Fratrvm Ordinis Predicatorvm Scoci." - seal of the Vicar of the Order of Friars Preachers of Scotland. It is thus described: Within a canopied niche a full-length figure of St. Andrew holding upon the dexter side his cross, which has a star between the upper extremities. Beneath the cross is a friar kneeling towards the saint. The background underneath and at sides of the niche is decorated with foliage and flowers. The seal of the friars is thus described: Within a canopied niche a representation of the coronation of the Virgin. The Father seated on the sinister with arched crown and nimbus, his right hand holding up the chrism, the Virgin seated on the dexter with open crown and nimbus. Above is what is supposed to be the dove. Legend: "S. Cme. Fratrv. Predicatorv. Glasg." - common seal of the Friars Preachers of Glasgow.