The story of Thomas Raitt, who emigrated from Scotland to America in 1860 and whose descendants subsequently resided in Mississippi, Illinois, Arkansas, Texas and elsewhere, starts, like so many of the Raitts who emigrated, in Angus, Scotland. The details of his descendants will be found on the Mississippi Raitts page; however, the ancestors of Thomas, who was the eldest son of Thomas Rait and Margaret Miller and was born in Dundee on 8 June 1841, are to be found here. This page could have been named Dundee Raitts, but since there are others from there to be added, then I have created this separate page for this particular family.

Thomas was the eldest son, and second child of David Rait and Isabella Low, and was christened on 31 December 1804 at Backmuir in the parish of Liff, Benvie and Invergowrie in Angus and he died on 25 October 1886 in St Peter, Dundee. For much of his life he was a baker, but later became a city missionary in Dundee. He was a Vice President of the Dundee Bible Society - an auxiliary to the National Bible Society of Scotland.

Thomas married Isabella Doig, who was born on 28 October 1808 in Dundee, on 2 May 1830 in Dundee. The couple had two children: James Doig, born 4 April 1831 in Dundee; and William, christened on 3 October 1832 also in Dundee. William seems to have died later in 1832 and Isabella also died a short time later, probably of birth complications.

The 1841 census for Overgate, Dundee has Thomas Rait, 35, baker, living with his wife Margt, 25; and son James, aged 2 - all born Forfarshire. Daughter Mary Ann, born in 1839, is not listed for some reason, unless she is erroneously labelled James - James, of course, should have the age of ten.

In the 1881 census for 42, Magdalene Yard Road, St Peter, Dundee we find Thomas Raitt, widower, 76, city missionary, born Liff; daughter Margaret A., 31, housekeeper, born Dundee; Alexander Murray, son-in-law, widower, 33, carver and guilder, born Dundee; and Margaret M. Murray, grandchild, 6, scholar, born Dundee. Alexander Murray had married Thomas’s daughter Elizabeth (Betsy) in 1873 - she died between 1875 (when her daughter was born) and 1881 (since her husband is a widower in the census).

Unusually, Thomas Raitt, sometime baker in Dundee and city missionary, left a lengthy will consisting of 21 pages which offers a fascinating glimpse into how a Scottish household was furnished in the 1880s. After various payments, including the sum of £7 to the children of his deceased son, Thomas, the total value of his personal estate was £680 0s 4d - a fairly hefty sum equivalent to about £41.000 ($78.000) in 2005 money. Part of his estate appears to have been left to his wife Margaret Miller, provided she remained unmarried (in fact she died before him) and his brother William Raitt, teacher in Aberdeen - but he too is mentioned as being deceased (thus before or in 1886). He wanted the children from his present marriage (i.e with Margaret) to be cared for from his estate and he wanted the residue of a Trust Estate then extant to be divided between his children including his son James from his former marriage, and their issue. To his daughter Margaret Anderson Raitt, in the event of her being unmarried at the time of his death, he seems to have left various items in the kitchen of his dwelling house, plus the Iron Bedstead and Feather Bed Bolster Pillows and Mattress and other enumerated items including his best blankets, a mahogany dressing table and standing mirror, a small easy chair in Green American cloth, his best carpet and hearthrug plus fire irons, silver tea spoons, piano, gold watch, his books etc. The reason that Thomas bequeathed so much to daughter Margaret is no doubt because she was living with him at the time of his death and looking after him. His wife and daughter Elizabeth had pre-deceased him, and his eldest daughter Mary Ann may have been married and thus able to be provided for by her husband, just as his sons could provide for themselves and their families. 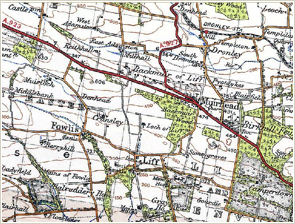 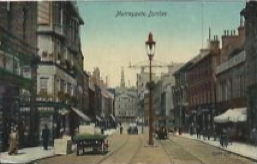 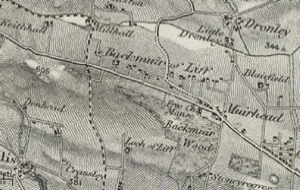 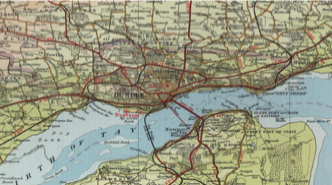 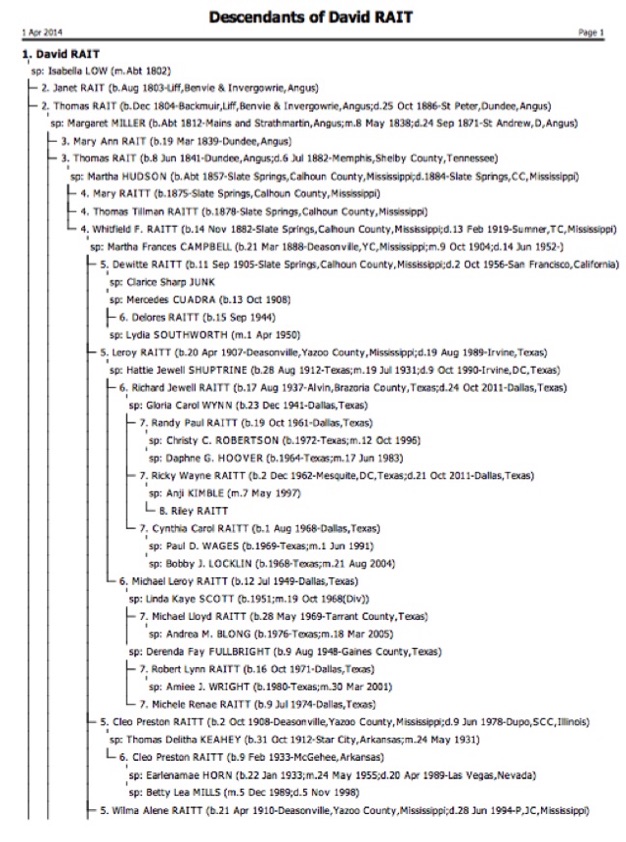 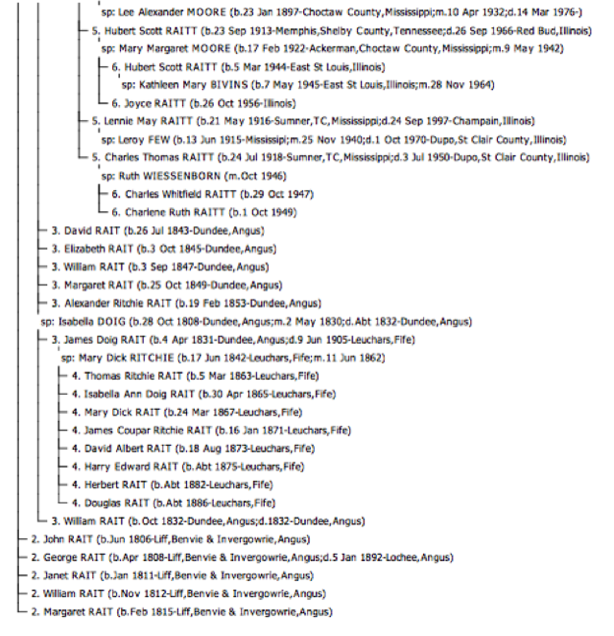 Apart fromThomas and George I have not yet done much research on the other members of the family of David Rait and Isabella Low, nor of all the family of Thomas and George (though Thomas’s son, Thomas, will be found under Mississippi Raitts.) The following may be the marriages in Dundee of the children of George. Isabella on 16 Feb 1872 to John Gall; Christina on 12 Dec 1866 to John Rattray; Margaret on 25 Dec 1860 to John Brodie; William on 27 Dec 1869 to Grace McGregor; Thomas on 19 Oct 1857 to Mary Winter. Betsy Raitt is the daughter of Thomas who married Alexander Murray on 3 Dec 1873 in Dundee and who died between 1875-1881; and Mary Anne Raitt may be her sister who married Alex Hoseick there on 9 Jan 1862.

Below is the tree thus far discovered emanating from David Rait and Isabella Low.

The 1841 census for Overgate, Dundee has Thomas Rait, 35, baker, living with his wife Margt, 25; and son James, aged 2 - all born Forfarshire. Daughter Mary Ann, born in 1939, is not listed for some reason, unless she is erroneously labelled James - James, of course, should have the age of ten.

In 1861 James Raitt, 30, born Dundee, was living at the Brewery, Leuchars, Fife where he was a baker and brewer employing four men.

Thomas was the eldest son (second child) of Thomas Rait and his second wife Margaret Miller. He was born on 8 Jun 1841 in Dundee, Angus and like his elder half brother, James, followed his father into the baking trade. However, at the age of 19 Thomas decided to emigrate to America, arriving in New York from Greenock, Scotland aboard the City of Manchester on 9 February 1860. He clearly went straight to Virginia, where he is recorded in the 1860 census as a baker with another Scottish family - presumably he knew them. His movements thereafter are not yet known for he is not yet found in the 1870 census. However, about 1875, presumably in Slate Springs, Calhoun County, Mississippi he married Martha Hudson, born about 1857 in Slate Springs and daughter of Elija Hudson and Catherine Hamby. Thomas and Martha had three children all born in Slate Springs: Mary, about 1875; Thomas Tillman, about 1878; and Whitfield F. in 1882. Thomas died in Memphis, Shelby County, Tennessee on 6 July 1882 and his wife Martha died a couple of years later in Slate Springs. (See Mississippi Raitts)

George was the third son and fourth child of David Rait and Isabella Low. He was christened on 24 April 1808 in Liff, Benvie and Invergowrie and died on 5 January 1882 in Lochee, Angus. He was a grocer. He married Christina Cairncross, born about 1809 in Dundee on 23 November 1836 in Dundee. They too had seven children between 1837-1849. At some point Christina died and when he was pushing 70, George married Margaret Crockett on 16 March 1875 in Dundee. She was born (as Crochat) on 1 January 1835 in Montrose and was thus nearly thirty years younger than her husband!

Precisely where George Rait and family were in 1861 and 1871 has not yet been ascertained.

However, in 1861, there is a George Rait, 26, baker, who is a boarder in Perth Road, Dundee in the house of Hanah Jackson, 67. She was born in Dundee, but George was said to have been born in England. Also, in 1871, George Rate, 37, baker, born England, is living at 21 Millars Wynd, Dundee in the household of Charles Murie, 40, a tailor, born Dundee and said to be the cousin of George. Also there is Hannah, 40, the wife of Charles, born England; and Hannah Jackson, 77, mother-in-law. I would presume that this is the right George, and the people conducting the census gave his birthplace as that of the head of household.