The mother of my paternal grandmother, Helen Scorgie, mother was Ann Robert Smith, born in Kirkden, Angus on 28 May 1846. Her father, Benjamin Smith, was christened  on 24 January 1819 in Inchmarlo, Banchory-Ternan, Kincardine and died in Arbroath on 26 March 1891. He married Susan Willocks (1818-1890) on 10 December 1842 in Inverkeilor, Angus. Together they had six children between 1844-1857, with Ann Robert Smith being the second born.. Benjamin (spelled Benjamine on birth extract) had moved south from Banchory about age 20, presumably for work. Like his father, Francis Smith, he was also a farm servant as agricultural labourers were known as - though in 1861 he had become a ploughman - a prestigious position. Francis and his family later also moved to Angus from Kincardine.

Ann Robert Smith was born in Kirkden, Angus on 28 May 1846, second child of Benjamin Smith of Banchory-Ternan, Kincardine and Susan Willocks (1818-1890) of Lunan, Angus (married  1842). Ann married Alexander Scorgie (1848-1924) from Easter Bonnyton, Banffshire on 9 June 1871 in Arbroath. They had nine children between 1871-1889. She died on 5 June 1929 in St Vigeans and is buried in Arbroath Western cemetery (grave ref I/61) along with five others including her husband Alexander Scorgie.

In the 1871 census for Brechin, Ann R. Smith, aged 24, born Inverkeilor, is a housekeeper at Dalgety Farmhouse on the outskirts of the town.

In the 1911 census for 11 and a half Dishland St, Arbroath, Anne, 64, born Kirkden is living with her husband Alexander Scorgie, 63, coachman in a horse hiring company, born Gamrie, Banff; and daughters Eliza, 39, single, shop assistant; and Isabella, 37, single, general domestic - both born Arbroath. Anne had been married 39 years to Alexander and had borne nine children, seven of whom were still living at the time of the census.

Death extract says Benjamin Smith is the widower of Susan Willocks, died 16 High Street, Arbroath, age 68 of bronchitis and senile debility. Father given as David Smith, farm servant, deceased and mother as Mrs Smith (deceased). Registered by Alexr Smith, son, 44 Marketgate. He is buried in Arbroath Western cemetery (grave I/62) along with six others including his wife, Susan Willocks.

Alexander was in his early 30s when his father died and may not have known his Smith grandparents very well or even at all - maybe they were already dead (although he was 20 when the Willocks/Hutcheons died) - but maybe they didn’t meet up much even though they lived fairly close unless they were still up in Banchory in his early youth. So maybe he confused his grandfather Francis Smith with his grandfather David Willocks - he knew he had one grandparent with the name David and just gave the wrong one - he didn’t even know his grandmother’s name - although he did give his maternal grandparents correctly. 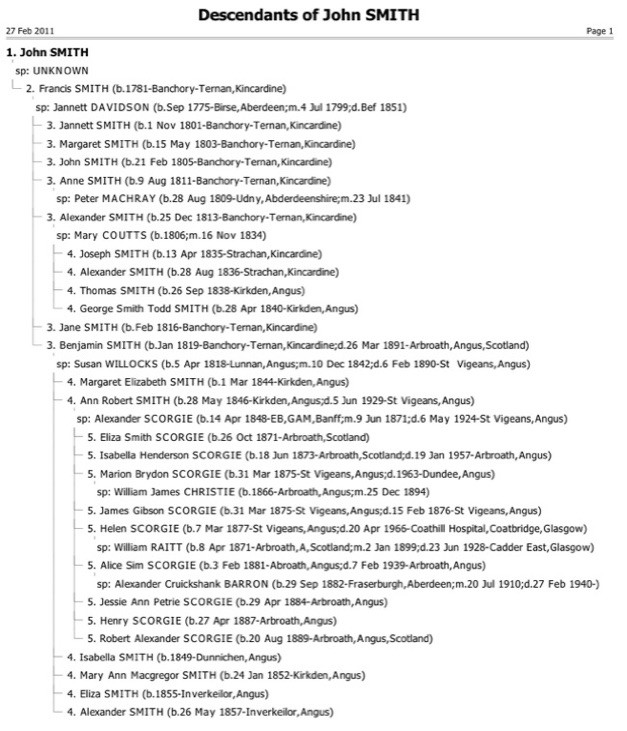 Benjamin’s father, Francis, married Jannett Davidson on 4 July 1799 in Birse, Aberdeenshire. She appears to have been christened on 26 September 1775 in Birse, - daughter of William Davidson. Francis, himself, may also have been christened in Birse on 1 November 1783 - son of John Smith; however, that would make his wife eight years older than him (and he not even sixteen - though an age difference does appear in the censuses). Since the marriage was also registered in Banchory-Ternan, Kincardine on the same day, then perhaps Francis was born there. However, in the 1851 census Francis's place of birth is given as Dores, Aberdeenshire - though Dores appears to actually be in Inverness-shire (banks of Loch Ness). In any event Francis and Jannett had seven children between 1801-1819 - all born in Banchory and with Benjamin being the youngest. The family at some point moved down from Banchory to Kirkden, Angus - possibly after Benjamin had gone.

In the 1841 census for Friockheim East Gate, Kirkden, Angus there is Francis Smith, 60, labourer, born outside census county; Janet Davidson, 65, born outside; Ann Smith, 25, female servant, born outside. Ann could be their daughter born in 1811.

In the 1851 census for Dunnichen, Francis Smith is 72, born Dores, Aberdeenshire, and a road labourer and he is noted as father-in-law in the household of Peter McCrie (road labourer, age 40, born Udny, Aberdeen) and his wife Ann (40, born Banchory) - Ann is the daughter of Francis and Janet. There is also a lodger Ann Smith, age 23, handloom weaver, born Kirkden -she is possibly a relative - daughter of one of Francis’s sons.

Some of the descendants of the earliest known in this line, John Smith, are given below for the five  generations down to my grandmother Helen Scorgie.