Some time after 1881, Walter Frederick Taylor, a labourer, then a carter, moved from Warwickshire to Gloucestershire to become a postman. On 23 July 1890 he was certified by the Civil Service Commission as qualified for the appointment of postman in Gloucester. In his early days as a postie he used to cover many miles on foot - he blew a whistle and people would come out to collect letters or give them to him to post. Later he had a pony and trap. In 1916 he was helping a friend out on his farm and caught his left arm in the thresher machine and lost it - it was replaced with a hook. In 1918 he was offered to be the sub-postmaster at Hartpury, Gloucestershire if he bought a property - which he did in Ashleworth (two miles away from Hartpury) for £130. It has been in the family ever since. Indeed, four generations of the family have run the sub-post office in Ashleworth for one hundred years. Walter Taylor (below right) and his wife, Ellen, who first bought the property in 1918 (Walter used to hold down books of stamps with his hook while tearing them out with his right hand; he also inspected the three postmen employed there each morning to check their uniforms were spotless). Their daughter Doris and her husband George Saunders took over in 1942 after her mother died on 21 March 1941 aged 77 (Walter died on 10 June 1944 aged 79 - his abode being given as The Post Office, Ashleworth). Then in 1950, their daughter Margaret and her husband William Westbrook took over and ran it until 1986, when their daughter Pat and husband Rod Riach in turn took over. However, since their children were not interested in becoming the fifth generation to run the post office the couple finally sold the property in 2018. There was a nice piece about the families and their post office in the Daily Mail issue for 4 July 2018. 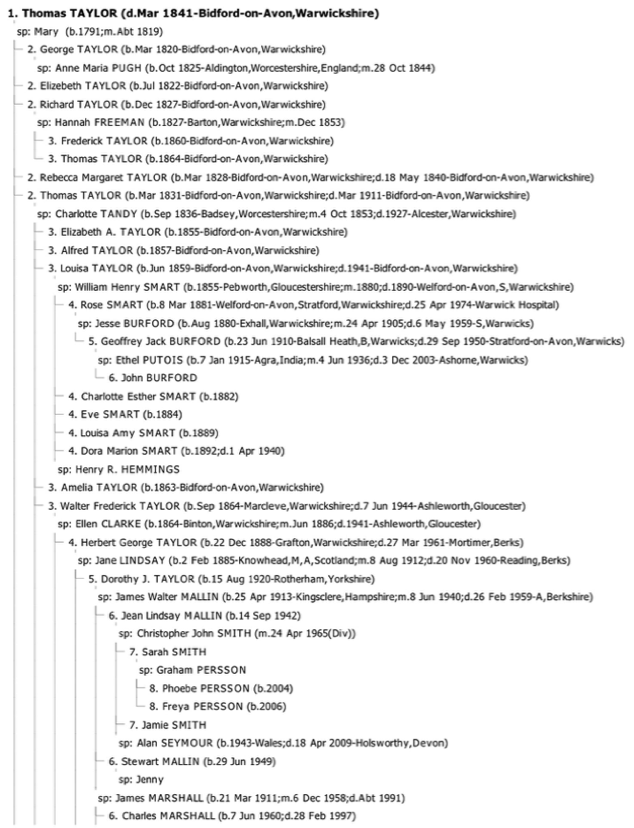 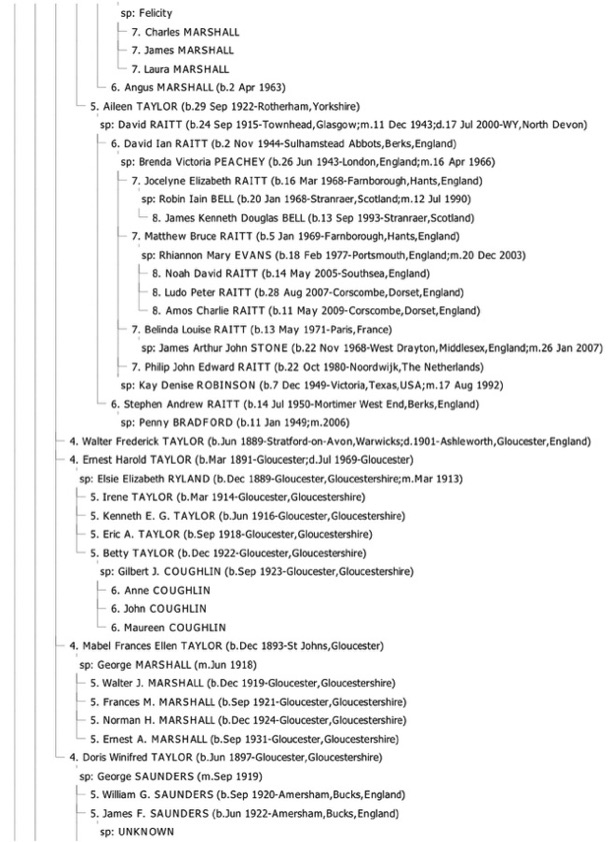 In the 1871 and 1881 censuses Walter Frederick Taylor is at home in Alcester, Warwickshire with his parents Thomas and Charlotte Taylor (see below).

In the 1911 census, we find Walter F. Taylor, married, 47, born 1864, Marcleve, Wariwckshire, rural postman living at Box Cottage, Hartpury, Gloucester with his daughter Mabel F., 17, born St Johns, Gloucester. Wife Ellen Taylor, 47, born Hartpury, is an assistant storekeeper (in asylum service) at Barnwood House Hospital For The Insane, Barnwood, near Gloucester; the record indicates that she had been married for 24 years and had given birth to five live children, four of whom were still living (son Walter Frederick drowned in the river Severn aged 9 - death registered in second quarter 1898 in Gloucester). Son Ernest Harold, 20, born Gloucester is a Great Western Railway engine stoker and a boarder with the Cook family at 40 Widden Street, Gloucester. Daughter Doris, 14, seems to be a servant at Stone Bow, Ashleworth, near Gloucester. Where Grenadier Guard son Herbert was is not yet found.

Walter Frederick Taylor was one of eight children born to Thomas Taylor and Charlotte Tandy. Thomas was christened on 27 March 1831 in Bidford-on-Avon and was buried on 9 March 1911 in Salford Priors, Warwickshire. Thomas married Charlotte Tandy on 4 October 1853 in Bidford-on-Avon, Warwickshire. Charlotte had been christened on 2 September 1836 in Badsey, Worcestershire and she died in the first quarter 1927 in Alcester. Warwickshire, aged 93 (thus born in 1834 - possibly there is a mistake with her age at death, or she was christened a couple of years after she was born). She was the daughter of John Tandy and Mary Morris both from Badsey. Thomas and Charlotte had eight children between 1851 and 1871: Elizabeth Ann, 1854; Alfred, 1857; Louisa, 1859; Amelia, 1862; Walter Frederick, 1864; Mary Ann, 1866; Fanny, 1869; and Leonard, 1871.

The parents of Thomas were Thomas Taylor and Mary Townsend who married on 26 October 1818 in Exhall, near Coventry, Warwickshire. Thomas was a widower from the parish of Foleshill, Warwickshire and Mary was a spinster from Exhall parish, born about 1790 in Chipping Campden, Gloucestershire. The couple seem to have had six children between 1820-1833: George, 1820; Elizabeth, 1822; Richard, 1827; Rebecca Margaret, 1828; Thomas, 1831; and William, 1833 - all born in Bidford-on-Avon. While Thomas, a labourer, does not appear in any census and thus may have died before the 1841 census - the death of a Thomas Taylor was registered in Alcester in the 1st quarter 1841 - this may be him. What age he was and what his previous wife's name was and whether he had any children with her is not known, though there are several possibilities. His wife Mary does appear in the 1841 (aged 50), 1851 (aged 62) and 1861 (aged 70) censuses, but not the 1871 one, but the death of a Mary Taylor was registered in the 2nd quarter 1861 in Alcester, and another in the 4th quarter 1862 in Stratford-on-Avon.

In the 1851 census for Bidford, Thomas Taylor is 22, born Bidford, a labourer, living with his widowed mother, Mary, 62, a pauper, born Campden, Gloucestershire.

In the 1861 census living in a private house at 111 Town End, Bidford there is Thomas Taylor, 31, born Bidford, waggoner; wife Charlotte, 25, born Badsey, Worcestershire, a glovemaker; and children: Elizabeth, A., 6, scholar; Alfred, 4, scholar; and Louisa, 2 - all born Bidford. Next door at number 110 is his mother Mary Taylor, 70, born Chipping Campden, widow, no occupation. Also there is her daughter-in-law, Hannah Taylor, 33, born Bidford, a glove maker - the wife of Mary's son Richard.

In the 1871 census for a cottage in Salford, Alcester, Warwickshire we have Thomas Taylor, 40, agricultural labourer; wife Charlotte, 35; and children Elizabeth, 16; Alfred, 14; Louisa, 11; Amelia, 8, born Bidford; Walter, 6, born Bidford; Mary A., 4, born Salford; and Fanny, 2. born Salford. (Son Leonard was born a couple of weeks after the census was taken.)

In 1881 the family is at Exhall, Alcester - Thomas Taylor is 50, born Fannington, Warwickshire, agricultural labourer; wife Charlotte is 45, born Badsey; son Walter is 16, a labourer; daughter Mary Ann is 14, at school; and son Leonard is 9, also at school. and all born in Bevington, Warwickshire.

In 1901 living in a cottage at Dunnington, Salford Priors are Thomas Taylor, 70, born Bidford, a carter on a farm; and wife Charlotte, 65, born Badsey.

In the 1911 census for Dunnington, Alcester, Salford Priors we find Charlotte Taylor, widow, 75 and a visitor Mary Elizabeth Newman, aged 16, born Alcester. Because Charlotte is a widow and thus no longer married, then details such as number of years married, total children born alive, number still living and number died are not given. Thomas had died in just prior to the census and was buried in Salford on 9 March 1911 aged 80. In principle Charlotte should be in the 1921 census, but I have not found her yet. 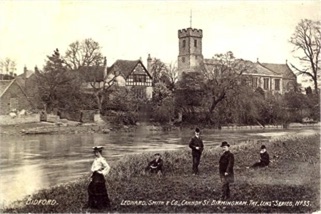 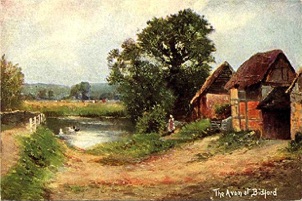 It would appear that Ellen's parents were Thomas Clark and Susanna Harris who married in Birmingham on 29 December 1845. They seem to have had eight children born between 1847-1870. The father of Thomas was Peter Clark, son of Thomas and Mary Clark (see below), and baptized on 5 September 1791 in Hampton Lucy, Warwickshire. His mother was Elizabeth Alexander, born about 1794 in Snitterfield. Peter and Elizabeth  married on 24 June 1824 in Snitterfield and had seven children born between 1823-1837.

In the 1881 census for Binton, there is Thomas Clark, 55, born Snitterfield, master blacksmith; wife Susanna, 53, born Welford; children: Sophia, 20; Charles, 15, working at home; and John Thomas, 12, scholar - all born Binton. Where Ellen is is not clear.

In the 1891 census for the same place, Thomas Clark, master blacksmith, is 65; wife Susanna is 62; son John T, is 21 and also a blacksmith; and also in the household is Henry F. Yelland, grandson, 14, born London. Living next door is son Charles Clark, 22, journeyman blacksmith; wife Caroline A., 21, born, Binton; and son Frederick, 1, also born Binton.