Charles Henry Raitt arrived in Melbourne, Australia aboard the Bungaree on 2 May 1891. He was single, aged 22 and his profession or calling was given as gentleman. On 30 November 1895, Charles married Elvina Amy Christine Berndt at Christ Church, St Kilda, Victoria. Elvina had been born in 1864 in Invercargill, Southland, South Island, New Zealand. Their daughter Amy Evelyn Mary was born in 1896 in Caulfield, Victoria, their daughter Stella Isabel was born there in 1898, while son Charles James Wellesley was born in 1905 in Warrnambool, Victoria.

Following Charles's return home from active duty in Gallipoli and Egypt and his recuperation from illness and subsequent demobilization on 4 February 1917, it appears that his family life had begun to come under strain. In the 1917 Electoral Roll, Amy/Elvina was living in Clarendon St, Maryborough, while Charles was living in the High Street and working as a bank manager. It is not clear where Charles and Amy were living in 1918, but Charles was accused of unlawfully deserting his wife and the story was picked up by the Maryborough and Dunolly Advertiser and reported on Wednesday, 23 January 1918 under the headline “Alleged wife desertion - Major C. H. Raitt charged - Case amicably settled.” The counsel for the complainant (Amy) said that the parties had been married in 1895, the defendant (Charles) being at the time a clerk in a bank. He was afterwards a resident of Maryborough as manager of the Bank of Victoria. In 1915, the defendant left Victoria with troops, going to the front as a major. He returned in January, 1916 and afterwards obtained employment with the Defence Department. It was about this time that things started to go wrong with the couple. It seemed that the defendant became fascinated by another woman, and this caused an estrangement. When challenged to prove this Amy’s counsel went on to say that in February 1917. the defendant went back to the bank, but in September 1917 he went in charge of a troopship to the other side of the world. He came back from this trip just recently, and from something the complainant had heard, she laid an information against him. and he was arrested. The counsel did not know the financial sources of defendant, or what his income was at the present time, but when he was in Maryborough he was drawing about £300 per year as manager of the Bank of Victoria. When he went away as major he was in receipt of a salary of £600 per year. He then allowed his wife £1 per day for herself and the children. From January to September 1917, however, she only received a sum of £17. which amount was only obtained by threats. Hs wife then made application to the Defence Department, and they allowed her £7 per fortnight. Apparently the pay ceased on 2 January [the day after Charles’ appointment to the Seat Transport Service was terminated] and Amy had not received any money from Charles since.

The Chief Justice asked before going into the evidence, was there no chance of the parties arranging an amicable settlement? Both of them were well and favourably known in the town and it was a pity that their grievances must be ventilated in court. The counsel for Charles replied that for some reason or other his client had been arrested. He was prepared to submit that the defendant had not deserted his wife, but when he heard that a warrant had been issued he surrendered himself to the police and was remanded to appear at this court on bail. His client was always willing and ready to support his wife and was quite prepared to do so now. However, if the court would adjourn for about five minutes, he would discuss the matter with his learned friend and see if any settlement could be effected. The counsels then held a brief consultation, and the counsel for Charles said that the defendant was prepared to go into the box and swear that he had never had any intention of leaving Australia, and had never applied for a passport to leave the country. He was at present out of a position, but as soon as he secured an engagement he was willing to allow his wife as much money as he possibly could. If his learned friend was satisfied with that undertaking, he could withdraw the case. However, Amy’s counsel wanted some definite offer and this was forthcoming with the offer to pay Amy one third of the money Charles would received when he obtained work. Amy’s counsel wanted the defendant to give a guarantee that he was not going to leave Australia. Charles then stated that at the present time he had no position, and had no assets by which he could keep either himself or his wife. He also swore that he had no intention of going away from the State [of Victoria]. However, he then qualified this by stating that he had said once that if he could not get a job in Victoria, and he was finding it a pretty difficult matter, then he might have to go away to another State. He also confirmed that he had not applied for a passport to leave Australia. He reiterated that he was prepared to give her one third of his salary once he had found a job. This was accepted by Amy and the charge against defendant was withdrawn. The court proceedings, reported verbatim in the Maryborough and Dunolly Advertiser were more succinctly reported in the issue of Truth for Saturday, 2 February 1918 under the heading “The Major and his Missus - Wife desertion charge withdrawn.”

The arrangement made, however, clearly did not last and Elvina filed for divorce from Charles in early December 1919. (In the 1919 electoral roll, Charles is living at 89 Alma Road, St Kilda East, Balaclava (seemingly unemployed since no profession is listed), though Elvina was still living in Clarendon Street. Their daughter Amy Evelyn Mary was living in Eurora and working as a bank clerk.)

The divorce petition provides some additional interesting details. The papers state that the Respondent (Charles), without just cause or excuse wilfully and continuously deserted his wife (the Petitioner) for three years and upwards. Elvina said she was 55 years old, born in Invercargill, New Zealand and domiciled in the State of Victoria; and Charles was 50, said to have been born in St Petersburg, and before marriage she supported herself as a musician. Before marriage Charles was a bank clerk and after the date of marriage until early 1915 he was a bank official. That year he then became attached to the Australian Imperial Force and was absent on duty abroad from about May 1915 to December 1915. He was retained on duty in Victoria and elsewhere until his discharge during January 1919. He subsequently obtained employment with the Commonwealth of Australia. Elvina stated that the only issue of her marriage were a female child Evelyn Amy Mary Raitt, born in Elsternwick, Victoria and who was now 23; a female child Stella Isabel Raitt, also born in Elsternwick, and now 21; and a male Charles James Wellesley Raitt, born in Warrnambool, Victoria and who was now 14. Elvina co-habited with Charles as man and wife in Elsternwick, Windsor, Warrnambool and Maryborough from the date of their marriage until Charles left Australia with the A.I.F. and then again on his return until about January 1916 when he deserted her. At the end of August 1916 when Charles was on duty at the Royal Park Military Camp, Elvina said she received a letter from him stating that he would not live with her again again. She visited him in Melbourne to beg him to reconsider if only for the sake of the children. He said that reunion was impossible and he absolutely refused to live with her again under any circumstances. In another letter he offered no excuses and said the fault was his - he added that she had been a splendid wife and mother and that as soon as he obtained his position in the Bank he would be prepared to make a home for the children to live with him if she so desired and to pay her sufficient to keep herself, not as his wife, but in common decency. He noted that they had not lived together as man and wife since January 1916 and there had been many estrangements before that time. On or about 27 March 1917, his daughter, Stella Isabel received a letter from him saying that sooner than live with her mother again he would shoot himself.

Elvina’s testimony was signed and dated 9 December 1919 and on 11 December 1919, Charles received a citation from the Supreme Court to the effect that he had to appear before the Court offices to say whether he intended to defend the suit and if he did then he was to file an answer within twenty-one days. Charles apparently made no attempt to appear or defend the suit and on 20 April 1920 a Decree Nisi was filed which instructed the Petitioner and Respondent to take Notice that if either of them contracted marriage before the Degree Nisi was made absolute they would be guilty of Bigamy. The Court subsequently ordered and degreed on 24 April 1920 that the marriage should be dissolved on the ground that the Respondent had without just cause or excuse deserted the Petitioner unless within three months from the date of the Decree Nisi sufficient cause was shown to the Court as to why the Decree Nisi should not be made absolute. The Court further ordered that Elvina should have the custody of their child Charles James Wellesley Raitt and that Charles, the father, could have access to him once each month. Charles was also to pay permanent alimony of two pounds ten shillings per week to Elvina paid fortnightly - the arrangements for this to be commenced and completed by 24 May 1920. He was also to pay her costs.

Not long afterwards, Charles Henry Raitt emigrated to the United States and remarried. 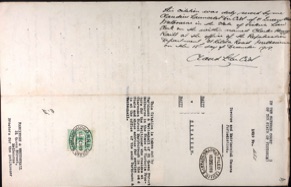