It has been fascinating to read all the various reports on Major Charles Henry Raitt’s medical condition and assessments by Medical Boards - there are quite a few of them, duplicates, some hand-written, some typed, often completed on the same date, but providing differing, even conflicting, details, especially of dates. Possibly it was necessary to establish, as much as anything, whether a soldier was guilty of malingering.

In the Proceedings of a Medical Board assembled at Al Hayat (Heliopolis, Egypt) on 11 November 1915 for the purpose of examining Major  C. H. Raitt, 21st Battalion, age 46, service 8/12, general nervous disability, granted leave for his disability as from 30 September 1915. The Board found that “He received a severe shock to the nervous system when the Southland was torpedoed. He was in the water for half an hour and recovered the body of Colonel Linton, who was a personal friend. He was at Gallipoli subsequently for three weeks and was ill during the last ten days. He has steadily lost weight ever since and has continued to lose weight at Helouan. He now weighs 9st 8lbs - ordinary weighs about 11st 8 lbs.” In the Board’s opinion, he was not fit for General Service nor for service at home and would remain so for 12 months. The disability was contracted in the service and under circumstances over which he had no control. The specific conditions for the disability caused by his military service were shock and nervous strain. The recommendation was discharge to Australia and boarded in [unreadable].

He was admitted to No. 5 Australian General Hospital [A. G. H., Melbourne] on 2 January 1916 having arrived from Egypt and was under treatment for shock and nervous stress from then until 8 April 1916. He was finally disposed of to S.O.I. [Staff Office for Invalids] Duty. In another form it says that he was admitted to No. 5 Australian General Hospital on 24 March 1916 and was discharged on 8 April 1916 - the disease was Comr. (?) Dysentery and Neurasthenia [nervous exhaustion]. He spent 15 days in hospital. A second page notes that felt much improved generally and felt that he would be much better with light home duty. He was accordingly recommended for light duty and to be examined later as to fitness for S.O.I Duty.

A Medical Board assembled at Melbourne Hospital on 22 February 1916 to examine Major C. H. Raitt, 21st Battalion found that he had tenderness at root of left sciatic nerve and was otherwise still very nervy and below par. Some septic teeth needed attention. He was not fit for service either at home or abroad and it was believed his disability would continue for 3 months. The disability was contracted in the service, while on military duty and caused by shock on Southland and infection in Gallipoli. In the accompanying detailed medical history at station No. 5 A.G.H [Australian General Hospital] of the invalid it is stated that he enlisted on 12 April 1915 in Maryborough and returned to Australia from service abroad on the Themistocles on 2 January 1916. His former occupation was Bank Manager. His disease or disability was 1) general nervous debility and 2) dysentery. The date and place of origin of the former was 2 September 1915 in the Aegean Sea, Shati (?) Island; and the latter 24 September 1915 in Gallipoli. The essential facts of the history of the disability were: Went into Gallipoli where he remained 4 weeks and contracted dysentery. No. 1 A.G.H. (in Heliopolis, Egypt) 2 weeks. Helouan Conv. C 5 weeks. Themistocles HS 4 weeks. No. 5 A.G.H since 2/1/16. The opinion as to the causation of the disability was given as 1) shock at sinking of (crossed out) torpedoing of Southland, and 2) infection. It was considered to be attributed to 1) ordinary military service, and 2) active service [being on a troop en-route to the battle field seems not to have been considered active military service]. His present condition was assessed as suffering from insomnia, neuralgia and sciatica, fair general health and heart was OK (a tick was given). It was recommended that he not be discharged as permanently unfit. On a further page with the same date, the opinion of the Medical Board was given. His pathological condition at the time of the examination of the Board was tenderness at root of left sciatica, some septic teeth, and insomnia. Here the disability was said to be as a result of active service caused by shock on Southland and infection. The disability was not permanent and the probable minimum duration was 3 months. The extent to which his capacity for earning a full livelihood in the general labour was lessened was given as total incapacity. He was not fit at present to earn a living upon discharge and thus it was recommended that he not be discharged as permanently unfit. He required further treatment to be restored to health and it was recommended that this be carried out at his own house in Maryborough for one month by Dr Green of Maryboro. A further recommendation suggested massage, dental attention, and some sedative at night for his dreams. On 8 April 1916 he was certified fit for duty and discharged from No. 5 Australian General Hospital  and ordered to report to the Staff Officer for Invalids at Victoria Barracks.

The Proceedings of a Medical Board assembled at the Royal Park Clearing Hospital in Melbourne on 2 September 1916 for the purpose of reporting upon the present state of health of Major Charles Henry Raitt found that “although there is no definite pathological condition present, he has not the necessary physical fitness to return to Active Service abroad. Having had a prolonged attack of dysentery while on service abroad, he is very liable to a recurrence of this trouble. He has not yet regained his normal weight and strength and still has some shortness of breath and fatigue on exertion. He had a severe attack of gall-stone colic on Gallipoli and still has tenderness over the gall-bladder. His incapacity for earning a full livelihood at his ordinary occupation is nil.” In the opinion of the Board he was fit for service at home only. His disability was permanent for service abroad. The disability was contracted in the Service, while on Military duty (active service in Egypt and later on Gallipoli), under circumstances over which he had no control.

The Detailed Medical History of an Invalid, namely Major Charles Henry Raitt, dated 16 September 1916 at Royal Park notes that he enlisted on 20 April 1915 at Maryborough, Victoria and returned from service abroad on 2 January 1916. His former occupation was Bank Manager. His disease or disability was shortness of breath and fatigue on exertion. The date and place of origin of disability was given as October 1915 in Gallipoli. The essential facts of the history of the disability were: In August 1915 whilst in Egypt suffered from dysentery for three weeks. Embarked for Gallipoli on 29 August 1915 [no mention of the torpedoing]. Whilst in Gallipoli had further attack of dysentery, gall stone colic jaundice (chronic cholecystitis due to presence of gall stones). Was unable to sleep for some 10 days and became neurasthenic. Was returned to Egypt in October 1915. The cause of the disability was asthenia following dysentery and hardships of active service. Specifically, infection with the microorganisms of dysentery; stress and strain and exposure attendant on active service at Gallipoli. His present condition was assessed as some shortness of breath and undue fatigue on exertion still. Still has some tenderness in gall bladder region. Has not regained his normal weight and strength. The history also noted that had received only ordinary hospital treatment and that an operation was not performed, although an operation was advised but declined. He was recommended for discharge as permanently unfit for service abroad.

The proceedings of a Medical Board assembled at Royal Park on 29 September 1916 found that “on present examination, there are symptoms of debility, also undue fatigue on exertion with some shortness of breath. Some tenderness over region of gall bladder indication chronic cholecystitis is present.” It was estimated his disability would continue for 2 months. The detailed medical history report gives a little more details in that it gave his regiment/corps (21st Battalion) and his age (47 years). The date of disability was August 1915 and the place was Heliopolis, Egypt, later Gallipoli. The concise facts were: In August 1915 first affected with chronic diarrhoea, laid up 3 weeks. The passed as fit. Rejoined unit on 26 August 1915. Well till October (Gallipoli from 29 August) and then got dysentery and general break-up with ? gallstones, then jaundiced for 14 days, and has been picking up since. The disability was due to active service and climatic conditions. His present condition noted that in January he weighed 10 stones and was not 11 stones. He was feeling very fair - eating well - tendency to diarrhoea not marked. Sleeping not too good. A Court of Inquiry was held on the disease in November 1915 in Heliopolis, Egypt where the opinion was that he should be discharged as unfit for some months to come, but not discharged as permanently unfit. It also noted there was no emetin treatment for dysentery. The opinion of the Medical Board on 29 September 1916 repeats the above, noting the cause of the condition was exposure to infection whiles on active service in Egypt and Gallipoli. The disability was not permanent especially regarding military service, previous occupation or other occupation. And it was considered that his capacity for earning a full livelihood in the general labour market at present was lessened by one eight. It was thought that he was not yet fit for discharge to earn a living and would require further treatment to restore him to health. The Board thus recommended a further period of duty in camp or elsewhere for two months to allow further improvement.

On 19 June 1917, Charles received a letter addressed to him c/o Gordon & Gotch, Queen St, Melbourne, asking him to attend at the F.M.O.S. office at 5 pm on Thursday 21st inst for medical examination. His present state of health was examined on 21 June 1917 at a Medical Board held at Victoria Barracks, Melbourne. The report found that “Major Raitt has now no evidence of any diseases. There is no tenderness or enlargement in the gall bladder region. His general condition has very much improved. He has gained in weight and seems in very good condition and health. He has no bowel trouble, has been able to work well lately and is not neurasthenic.” He was found fit for service and home or abroad and his disability was dysentery contracted while on ordinary Military Service. 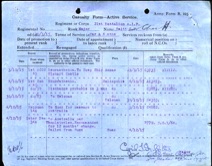 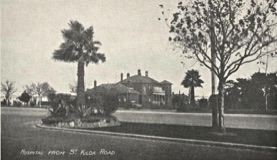