Alice Kirk Raitt was the fifth child of William Raitt and Helen Scorgie and was born on 23 July  1908 in St Rollox, Glasgow. She was a book folder and married Peter McAneny on 7 July 1933 in Glasgow.

Alice died in East Kilbride on 10 July 1973. The couple had five children: Peter Spencer (born 1834), David Raitt (1935), Robert Scorgie (1937), Helen Scorgie (1938), and Edward (1943). Peter and David were both engineers in the Merchant Navy, while Robert was a nuclear power engineer in Thurso, Caithness before emigrating to Sydney, Australia with his wife Ethel in the mid-1960s where their fourth child was born. Peter also worked as a nuclear power engineer after leaving the sea. Helen lived in Cyprus for several years with her husband, Jim Blanchard who was stationed at RAF Akrotiri and where their son was born. Thereafter they also emigrated to Australia (Perth) - where two daughters were born, followed by younger brother Edward and his wife Kathleen (their three children being born in Perth), where they would become teachers. Peter and his wife Davina and family and his brother David and wife Nancy and family remained in Scotland.

Peter McAneny was born on 15 December 1908 in Glasgow, the second of four sons of Patrick McAneny and Mary Spencer who married on 15 July 1907. Their first born, Patrick, died a couple of months after he was born in 1907. Their other two sons were Robert (born in Glasgow in 1910, married in 1934 to Margaret Duffy, and having four children) and James (born in Glasgow in 1914 and married to Mima. Peter died in Kilwinning, Ayrshire on 20 June 1974. Peter was a very clever man; he was known as a very good footballer and played for one of the Junior teams in Glasgow. He worked as a print operator in the shipyards, but during the war he was an electrician in the shipyards, having gone on a course. Later he became a technical clerk.

Peter's father, Patrick McAneny, was born in Glasgow on 25 May 1885 and died there on 15 November 1918 - a casualty of WW1. At the time of his death he has a Private in the 18th Highland Light Infantry and was awarded the Victory and British medals. He was the eldest child of Patrick McAneny and RoseAnn McKay. According to the 1891 census (the only one found for him) Patrick was born about 1861 in Ireland (his parents were Patrick McAneny and Mary Callan - both of Ireland) - however, his death extract gives his age as 61 implying he was born about 1857. He died on 24 April 1918 at Houton Bay, Orphir, Orkney where he was working as a labourer at the sea plane base there. His usual residence was given as 222 Castle Street, Glasgow - which was apparently the address of his sister-in-law Sarah Fraser. Patrick McAneny and Mary Callan had at least one other child: Peter, born in 1866 in Ireland. He married Julia Duffy on 1 June 1897.

Patrick McAneny and RoseAnn McKay were married on 1 January 1884 in Glasgow and had six children between 1885-1894: Patrick, Annie, Edward, Peter, Mary and Catherine. Daughters Annie and Mary died soon after birth. Son Peter was another casualty of WW1, killed in action on 12 October 1916 in Salonika, Greece. He was a Corporal in the 1st Battalion, Royal Scots. In his military records there is a will leaving any money to his father and his possessions to “my sister Katie”. There is also an envelope addressed to her with various stamps upon it, but it was returned marked “deceased”. She had died on 14 April 1917 of extensive burning after her clothes had caught fire. Indeed, Peter’s younger brother Edward (living with his aunt Sarah (RoseAnn's sister) at 222 Castle St, Townhead, Glasgow) seems to have been the only surviving member of the family according to an Army form dated 22 October 1920. He had married Sarah Boyle in 1907 in Glasgow. After RoseAnn’s death, Patrick subsequently married Annie Jeffrey in 1900, but she died of typhoid on 3 February 1901 aged 38. 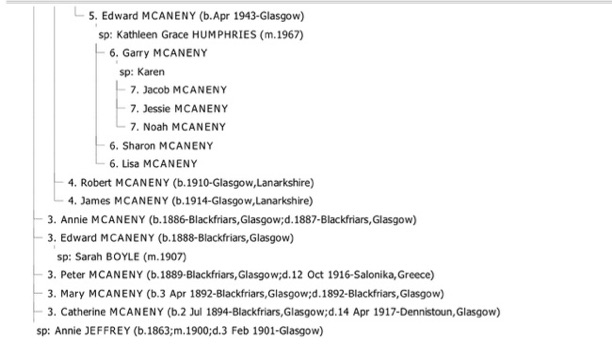 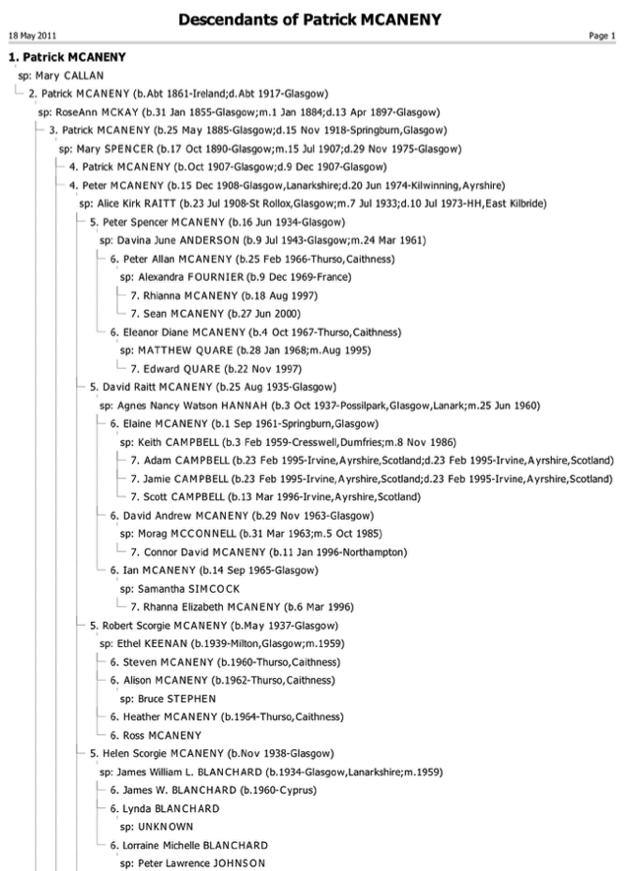 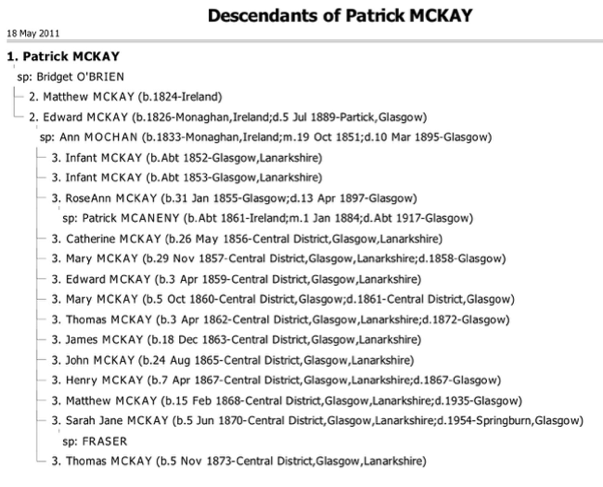 Mary Spencer was born in Glasgow on 17 October 1890 and died there on 29 November 1975. She married Patrick McAneny when she was only sixteen. She was the adopted daughter of Robert Spencer and Margaret Devine (also down as Divine) - Robert being born in Ireland about 1860, while Margaret was born in Glasgow about 1863. They married on 17 July 1885 in Glasgow and had a son Robert in 1896. In the 1891 census for 9 Dean Street, Glasgow St Paul, there is a Robert Spencer, aged 32, born Ireland, sewing machine maker and his wife Margaret, aged 27, born Glasgow. Following the death of her husband Patrick McAneny, Mary married his best friend, Arthur Davren and they had four children.

RoseAnn McKay was born on 31 January 1855 in Glasgow and died there on 13 April 1897. She was the third of fourteen children of Edward McKay and Ann Mochan who married on 19 October 1851 in Glasgow. Both were born in County Monaghan, Ireland - Edward about 1826 and Ann about 1833. Edward died in Partick, Glasgow on 5 July 1889, and Ann died there on 10 March 1895. Edward’s parents were Patrick McKay and Bridget O’Brien, while Ann’s were Patrick Mochan and Mary Ward. Patrick and Mary had seven children, two born in County Monaghan and the remainder in Glasgow. Patrick subsequently married Agnes Weatherspoon in 1855. His parents were Thomas Mochan and Roseann Callaghan.

Unfortunately, it is almost impossible to find Irish records from the early-mid 1800s as they were destroyed in a fire - thus full details of parentage and children cannot always be found. However, since many Irish came to Glasgow then later families and relationships can be more easily ascertained.

In the census for 1907, Patrick was living at 116 Drygate, Glasgow - the home of Mary Spencer.

In 1911 census for 9 Tarbet St, Blackfriars, Glasgow is Patrick McAneney, 25, lorryman for provisions merchant;  wife Mary, 20; sons Peter, 2 and Robert, 6m - all born Glasgow. Patrick and Mary had been married four years and had three children two of whom were still living at the time of the census.

In 1911 census for 9 Tarbet St, Blackfriars, Glasgow Mary, aged 20, is living with her husband Patrick McAneney, 25, lorryman for provisions merchant; and sons Peter, 2 and Robert, 6m. Mary  had been married for four years and had borne three children, the eldest of which, Patrick, born in October 1907 had died in December 1907.