William Raitt, born in Arbroath on 6 May 1901, was the eldest child of William Raitt and Helen Scorgie. He married Sarah McKee on 31 December 1931 in Dennistoun, Glasgow and they had two children, William (Bill) Raitt and Doreen Purvis Raitt.

Sarah McKee was born on 16 April 1903 in Dennistoun, Glasgow and died in 1992 in Kirkintilloch, Dunbartonshire. Her parents were James McKee and Susan Downerd (various spellings) who were both born in Ireland in the early 1860s and who married on 19 August 1893 in St Rollox, Glasgow. James, aged 33 at marriage to Susan was a widower resident at 142 Garngad Rd, Glasgow and employed as a chemical work labourer. He was the father of four children between 1882-1887 with his first wife Annie who was born about 1861 in Ireland. His parents, both deceased at his marriage to Susan in 1893, were James McKee and Mary Gibson (or similar). The family must have moved to Scotland (Glasgow) some time between 1887 and 1891. Annie died between 1891 and 1893.

Susan was a laundress aged 30 at marriage and her parents are given as John Downerd and Susan Davidson. It seems likely that she is the Susannah Downard, born 24 April 1862 (baptized 8 June 1862) in Clones, Monaghan to John Dorward and wife Susannah. James and Susan had at least five children between 1892-1903 with Sarah being the youngest. In fact, according to the 1911 census, they had been married 20 years and had had six children, five of whom were still living. Presumably daughter Annie died between 1901 and 1911.

As note above, Sarah McKee, aged 7 and at school in 1911 was living with her parents and siblings at 143 Garngad Rd, St Rollox, Glasgow. 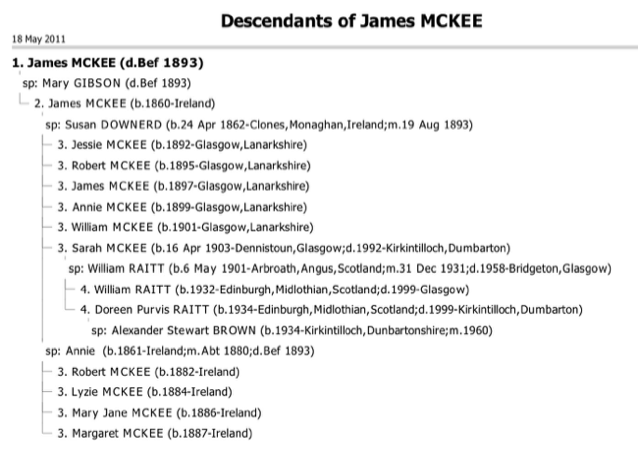