As noted in the Raitt DNA introduction page, I had my DNA, both paternal and maternal, also tested with BritainsDNA. Here I give the results of this second test which was two years after the previous one by Oxford Ancestors. The results of my YDNA test with BritainsDNA are reported on another page, as are the results of the redhead test they also did for me. The following is extracted from the information provided to me by BritainsDNA. In essence the story (which I have condensed) is pretty much the same as that provide by Oxford Ancestors, but there is a little more depth now since I belong to subgroup H5c.

Your mitochondrial DNA group is H - that of THE PIONEERS, the women who recolonized Europe after the end of the last ice age, who moved north with their families into an unknown and empty landscape. Your mtDNA marker, which only women can pass on to their children, is H. It is ancient and arose a long time ago, c40,000 BC, in the vast lands between the Zagros Mountains in Western Iran and the Altai Mountains on the borders of Kazakhstan and Mongolia. Most common in the Basque country, H (including its main subgroup H1) is the most frequently found mtDNA marker in all of Europe and it is also common in Western Asia and North Africa. The reason for this is simple. As pioneers, your ancestors were extremely successful as they and their descendants penetrated every corner of Europe as the dominant maternal lineage. Your marker is also found as far afield as Central Asia and Northern India.

We have extracted DNA from your saliva and read your genetic code. We all inherit about six billion letters of DNA from our parents and geneticists read them in sequences of the letters A, C, G and T, the chemicals that make up the DNA molecule, the double helix. We have looked at a large number of variable letters in your sequence, which are known as markers, in order to discover your personal genetic signature.

Mitochondrial DNA, or mtDNA, is a small piece of DNA which is passed on from mother to daughter to granddaughter. Men also inherit their mtDNA from their mothers, but do not pass it on. It is inherited as one block and contains many markers which allow us to identify almost two hundred different groups of related lineages and thousands of subtypes within these groups. Mitochondrial DNA markers are named by their position in the sequence of mtDNA letters (from position 1 to 16569). When you look at the markers that define your personal DNA signature, the letter after the number indicates which variant (also known as an allele) you carry at that position. For example 3197C would mean you carry the C variant or letter at mtDNA position 3197 (rather than the T).

Some of the variants you carry are key markers which define a larger group of related ancestral lineages to which you belong, your haplogroup. These markers are all found on a segment of DNA called the Y chromosome and it is only inherited in the male line. This means it provides no information on all your other ancestors. However, it is the most informative genetic system for identifying ancestral lineages. Your blood relatives on the male line will share your DNA signature.

These ancient lineages are known by different names, such as H1 or U5 or J1b1. Some haplogroups are specific to particular parts of the world and others are more widespread, but most are common in some places and rare elsewhere. By comparison with published and unpublished databases, geneticists are able to infer roughly where and when in prehistory each haplogroup originated, as well as tracing the probable route taken by the deeper ancestors of the haplogroup. For example U5 is about 36,000 years old and arose in the Near East.

We have tested about 3,000 mtDNA markers and report those where you differ from the Cambridge Reference Sequence or CRS, the first mtDNA ever to be sequenced, which is used as the reference standard for comparisons. Your blood relatives in the female line will share your mtDNA results. Some markers have not yet been tested in large samples of known heritage, particularly those that have been discovered recently, and so they, not surprisingly, are poorly understood as yet. We make it clear in your results if this is the case.

H5 has been dated to around 9500 BC and is present at low levels throughout the Near East and may have evolved in West Asia, spreading later into Europe with farmers where it is most frequent and diverse in the Western Caucasus. Its ancestor was identified as a putative late-glacial founder type. It is found in Iberia, central, eastern and southeast Europe and less frequently in northwest Europe. Its subclade H5a has a stronger representation in Europe rather than the Caucasus and Near East.

Below is your mitochondrial DNA genetic signature: a list of all the markers from the chromo2 chip for which you are positive and differ from the 16569 letter mtDNA sequence Cambridge Reference Sequence (CRS). We test over 3000 mtDNA markers and those where you differ from the CRS are indicated by the position of the marker in the mtDNA molecule followed by the DNA letter change, e.g. 9477A. If you match the CRS at a given marker it is not listed. People with a small number of markers are closer genetically to the CRS and those with a large number of markers are more distant genetically. For these comparisons we use the revised CRS, as published by Andrews et al (1999) Nature Genetics 23: 147, which corrects a small number of errors in the original sequence.

You belong to the H5c subtype. H5c G12127A – this is the required mutation (from G to A)  to be in this haplogroup

The chart shows the relationships between the various haplogroups. Regarding haplogroup frequencies based on Britain’s DNA customers, R0 has 46.8% and H Pioneers has 25.9%. The only subgroup for H given is H1 with 16.3% - so presumably H5 is smaller and H5c smaller still. The map below shows the world distribution of haplogroup H based on current DNA samples: Scotland as a whole has 25%, while Scotland North East has 28% and Scotland Central has 26%. 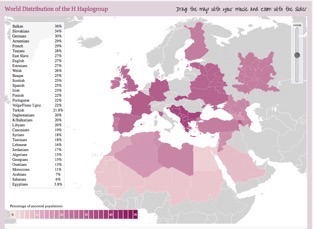 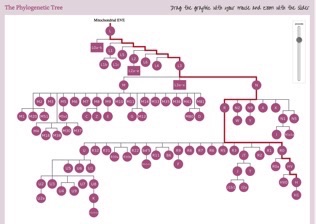 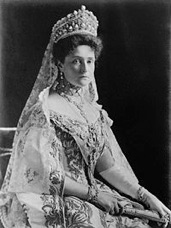 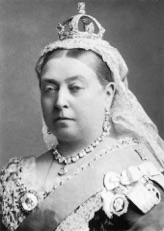 The chain of my immediate forebears in my maternal line will be found at the bottom of my mtDNA page from Oxford Ancestors and is thus not repeated here. As also noted there, I have traced my maternal DNA back as far as I can at present and have provided information about these earliest maternal ancestors together with their tree on a separate page.

Your marker has a fascinating modern footnote as its identification helped solve a mystery. In July 1991 a shallow grave was discovered at the site of a large house in the outskirts of Ekaterinburg, a busy industrial city in the foothills of the Ural Mountains. Nine bodies were disinterred. There was strong evidence that they were the Romanovs, the skeletons of Tsar Nicholas II, the Tsarina Alexandra and their children. In the wake of the October Revolution, the royal family had been murdered by Bolsheviks at Ekaterinburg – but were these bodies the Romanovs? DNA supplied answers. The remains of Tsar Alexander’s brother, the Grand Duke George, were exhumed and his DNA was found to be a perfect match for that of the only man buried at Ekaterinburg. But the connections did not end there. The mitochondrial DNA of the Tsarina Alexandra was also recovered and found to be a perfect match for that of Prince Philip, the Duke of Edinburgh. Both had subtypes of the haplogroup H, and both could trace their DNA back to Queen Victoria, who certainly carried the same markers. Another bearer of H was Margrethe, 11th century Queen of Denmark and sister of the legendary King Canute (Cnut).

The ancestor of all men, traceable back through a Y chromosome line, is thought to have lived some time around 200,000 BC. It seems certain now that the whole of the rest of the world was populated by men and women who walked out of Africa around 60,000 years ago.

Mitochondrial DNA closely tracks the movement of people from the western ice age refuges to Britain and Ireland. A very recent sample of 5,000 people from all parts of Britain and Ireland, both men and women (since we all carry mtDNA), shows something remarkable. Just under 56% of all those tested in 2012 are descended from those bands of hunter-gatherers who walked north across what is now France, or sailed up the Atlantic coastline and began to settle in Britain and Ireland after the ice melted. Those who carry the DNA marker H and its subgroups are by far the largest cohort at 44% and the distribution is nationwide, and markers U and HV0 make up the remainder. Indeed some 60% of Europeans carry haplogroup H and its subgroups. All of these markers appear to have arisen in the ice age refuges and then fanned out over Europe, Britain and Ireland after c9,000 BC. For example, the highest modern frequency of H (including its main subgroup H1) is in the Basque Country, at the western end of the Pyrenean ranges.

It is important to bear in mind how very small hunter-gatherer populations were, numbering into only the hundreds over wide ranges and no more than a few thousand on either side of the Pyrenees at the height of the last ice age. But when the weather began at last to warm, the expansion over Europe was rapid and dramatic. The likely reason why such a tiny number of lineages, the mtDNA haplogroups H, U, and V spread so far and so fast is not only linked to small populations, it is also a result of a demographic phenomenon known as the wave effect. These pioneer bands left the safety of the dark caves and their paintings around 11,000 BC and ventured northwards into empty landscapes, likely pulled by the altered migration patterns of the animals they depended on. For several millennia, as the ice in the north slowly melted, Britain and Ireland were not islands but part of a peninsula of Northwestern Europe. The land bridge across the Strait of Dover was not inundated by water until around 8,000 years ago, by which time bands of your ancestors had settled in many parts of Britain and Ireland.

Women with your H marker also colonised the whole of the rest of Europe after the end of the last ice age to become the dominant maternal lineage between the Straits of Gibraltar and the Arctic Circle, between Ireland and Russia.  Because your ancestors were moving into an empty landscape, there was an abundance of food and no competing pressure from neighbouring populations. Which does not mean that their lives were easy. By any historical standard they were hard, uncomfortable, fraught with dangers and usually short. But the fact that many millions of European women are your sisters in DNA is testament to the courage and resourcefulness of your ancestors.