As noted in the Raitt DNA introduction page, I had my DNA, both paternal and maternal, tested with Oxford Ancestors. A brief explanation of mitochondrial DNA (mtDNA) and Y-chromosome (yDNA) is given on a separate page and I report the results of my yDNA also on another page.

Oxford Ancestors tested only for HVR1 and read only a small part of my mtDNA, four hundred letters to be exact, out of a total of over sixteen thousand that make up the entire mitochondrial DNA. This four hundred letter segment is rich in mutations which are used to tell people's DNA apart and whether their mtDNA sequence has been passed on with little or no change from remote female ancestors. When a person’s distinct mtDNA sequence is compared to a reference sequence then if the mtDNA code is 000, this would indicate that a person  inherited the reference sequence with no changes at all.

However, my own sequence differs from the reference sequence – namely at positions 240 and 304. What this means in my case is that at position 304 on the reference chart the T is changed to a C. My code for position 240 is actually 2401 – the fourth digit tells me the nature of the rare change that has occurred in my DNA at that position, namely that the A in the reference sequence is changed to a C in my case. Such mutations are extremely useful for studying our ancestry because they happen only rarely – on average mutations occur in mtDNA only once every twenty thousand years! My sequence is thus as follows:

Scientific research over the last twenty years has gradually clarified the genetic relationships between all the peoples of the world, showing that we are all part of the same evolutionary tree. The maternal family tree assigns the mitochondrial DNA analysis result (in my case prepared from a cheek cell sample that I supplied) to one of thirty-six clans, each founded by one woman. The clusters of mitochondrial DNA sequences are shown as circles on the charts of human ancestry below and their genetic relationship to one another indicated by the connecting lines. My own place in the overall scheme is marked by a star - and it is my mutations that are used to identify my clan mother and place my star in the correct position on the charts. 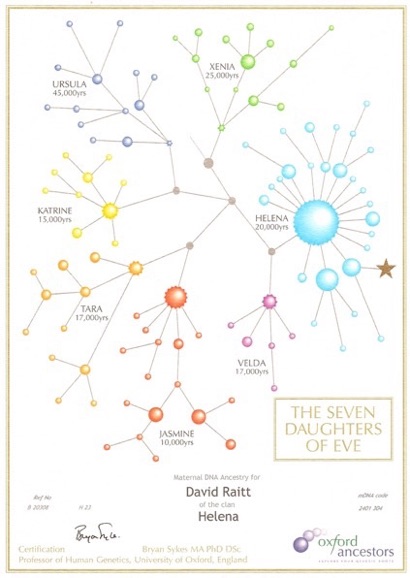 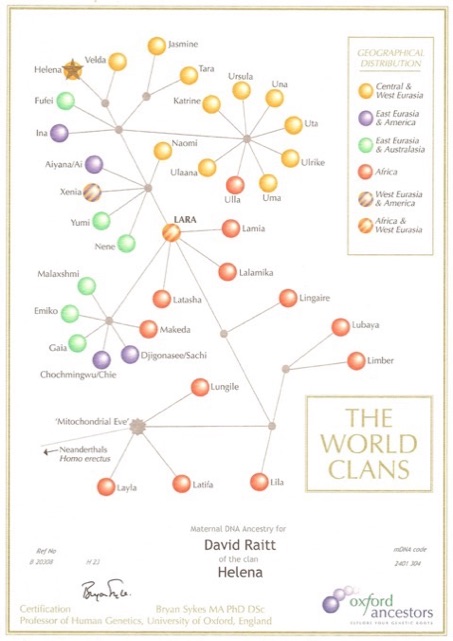 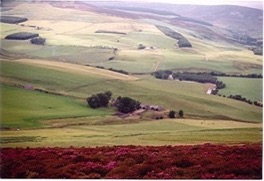 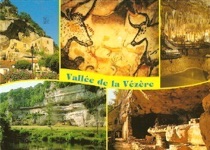 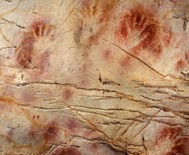 Paleolithic paintings discovered in caves in Northern Spain are Europe’s oldest known cave art. 50 paintings from 11 caves have been dated by researchers and the red hand stencils and disks made by blowing paint onto the wall in El Castillo cave date back to at least 40.800 years – as much as 10.000 years older than previous examples from France. However, it transpires they may not have been produced by relatives of my ancestor Helena, but rather by Neanderthals!

Regarding my mtDNA, it would appear from the chart above that I belong to haplogroup H (or the clan of Helena - one of Brian Sykes’ original Seven Daughters of Eve), but specifically to an offshoot of it (which is clearly fairly large). This is because, for some reason, I have a couple of mutations in my DNA. If I had no mutations at all then I would be a direct descendant of Helena. But since I have two mutations (which still places me in Helena's clan), these changes mean that I am not a direct descendant of Helena herself but am descended from one of Helena's female relatives – most likely a sister.

Since my maternal ancestry is traced to Europe, then I am but one of the more than 95% of native Europeans whose mitochondrial DNA sequence is found in one of the seven major European clans (the Seven Daughters of Eve). The interconnecting circles on the chart above are of different sizes, reflecting the approximate number of people in Europe who have that particular sequence. The lines connecting the circles represent mutations. The longer the line, the more mutations separate the sequences at either end. The largest of the grey circles near the top-centre of the chart represents the sequence that connects the Seven Daughters of Eve chart to the rest of the world, through the dotted line.

The chart below shows how my clan Helena (with a star at top left) fits in to the rest of the world and is made up of interconnecting circles, each representing a group of related DNA sequences while their colours indicate the geographical distribution of the modern day descendants of the clan. The details of the chart have been worked out by Oxford Ancestors using tens of thousands  mtDNA sequences from people living all over the world. The lines connecting the circles trace the evolutionary pathways of our ancestors. Each line connects two circles whose sequences differ by one or more mutations out of the 400 DNA letters that are read. The grey star, or node, near the bottom-left of the chart represents the sequence of the ancestral mother through whom we are all related, the woman known as "Mitochondrial Eve". It is through her that we are related to the other, now extinct, species of humans, Homo erectus and Homo neanderthalensis, shown on the chart as a dotted line. The other grey nodes on the chart represent DNA sequences that have not yet been found in any person living today, but that are known from reconstructions must have existed.

As mentioned, the members of each of the 36 groups or clan identified so far are all descended from a single female ancestor through the direct maternal line. These women are called the clan mothers and from my DNA sequence it has been ascertained to which clan I belong and which of these 36 women is my maternal ancestor. There was actually nothing particularly remarkable about any of these clan mothers when they were alive. However, it is known that each one of them must have survived long enough to have children and that each had at least two daughters, starting off the lines of descent that reach right down to all of us living today. These were real people, real women - our true ancestors - who brought up families, but who lived in very different circumstances to those that we enjoy today (see Scotland’s Prehistory).

My immediate forebears in my maternal line will be found in the Lindsay tree. However, I have traced my maternal DNA back as far as I can at present and have provided information about these earliest maternal ancestors together with their tree on a separate page. The chain is as follows:

Born probably around Menmuir, Angus about 1690; died probably in 1753 in Menmuir where she may be buried.

Although this mtDNA line ends with me and my brother being males, it does continue for another three generations through my mother’s sister and her daughter, granddaughter and great granddaughters.

As noted above I belong to the clan of Helena - not a direct descendent but likely descended from a sister. The clan of Helena (Greek for light) is by far the largest and most successful of the seven native clans with 41% of Europeans belonging to one of its many branches. Whether just by chance or by the guiding hand of natural selection is not known, but Helena's clan has grown to become the most widespread and successful of the Seven Daughters of Eve. Her children have reached every shore, settled every forest and crossed every mountain range. Helena's descendants can be found from the Alps in the South to the Scottish Highlands and the Norwegian fjords in the North, and as far east as the Urals and the Russian steppes. The clan is widespread throughout all parts of Europe, but reaches its highest frequency among the Basque people of northern Spain and southern France.

It began 20,000 years ago with the birth of Helena somewhere in the valleys of the Dordogne and the Vezere on the strip of land that joins France and Spain, near what is now Perpignan. The area is riddled with prehistoric caves (such as Lascaux) famous for their paintings, some dating back to 15.000 BC. She belonged to a family of hunters, who harvested the rich oyster beds in the lagoons of the Camargue to supplement their diet of meat. Helena's clan arrived in Europe from the Middle East, pushing their way along the Mediterranean, constrained to the narrow strip of land that was still habitable. Not long after she was born, the glaciers that covered the Pyrenees, which Helena could see on a clear day only thirty miles from her camp, began to draw back as, little by little, the summers grew warmer. Some of her clan moved south of the mountains, up the valley of the Ebro to the West to reach the lands of the Basque, where they remain to this day. The most adventurous of her children took advantage of the climatic improvements and journeyed ever northwards to join the great movement of hunters across the plains of France. We know that they reached England around 12,000 years ago because DNA recovered from a young male skeleton found in Gough's Cave in Somerset shows that he too belonged to the clan of Helena.

Although this description of Helena’s life does have a little poetic licence, the genetic synthesis by Stephen Oppenheimer in his work The Origins of the British reveals that the majority of Celts (Irish, Scots, Welsh and Cornish) arrived in the British Isles via the Atlantic coastal route from Ice Age refuges including what is now the Basque country!