As noted in the Raitt DNA introduction page, I had my DNA, both paternal and maternal, tested with Oxford Ancestors. A brief explanation of mitochondrial DNA (mtDNA) and Y-chromosome (yDNA) is given on a separate page and I report the results of my mtDNA also on another page.

My y-chromosome signature is given below. 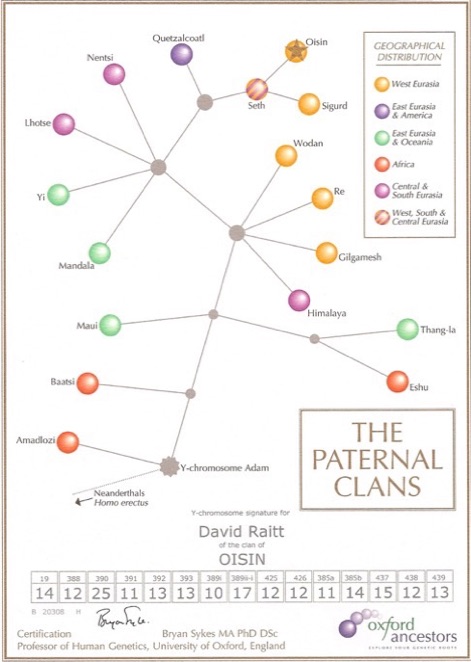 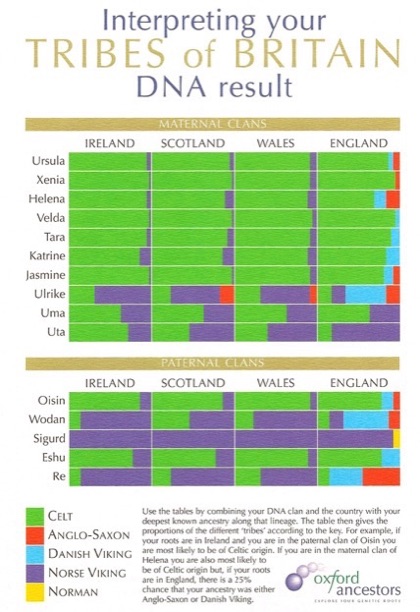 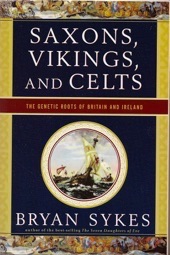 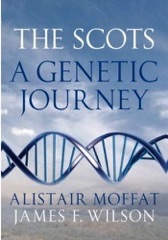 This is all I have at the moment, but I intend to undertake some deeper analysis of my DNA to try and ascertain more precise links with the past. My data has been added to the Oxford Ancestors’ database and I have also entered it into Ysearch (and will do so in more databases) so that other may compare theirs with mine. There is one other Raitt in the latter database (from Canada) and we have several matches – and there are also a couple of non-Raitts who have exact matches with all fifteen of my markers! I will create a separate page with the information on these people and I invite other Raitts to also provide their DNA results to add to this site.

I have traced my paternal DNA back as far as I can at present. There are known possible ancestors for the earliest John Raitt, but I am not currently certain that they would be correct. The chain is as follows:

Born about 1738, probably in Angus, most likely Arbroath or St Vigeans; died 1787 in Arbroath, Angus.

The great majority of native male Europeans are members of seven major clans: three of which (Seth, Oisin and Sigurd are related to each other and together form a 'super-clan' that is found over a wide area of Europe and Asia. The most ancient of the three clans was founded by Seth (clade R1) who lived in the Middle East about 50,000 years ago. His direct patrilineal descendants form the clan bearing his name and are now found in an arc extending from the Middle East to Iran, Afghanistan and the Indian subcontinent. Other descendants of Seth travelled west into Europe where they formed the clans of Oisin (clade R1b) and Sigurd (clade R1a).

The clan of Oisin is very prominent in Western Europe and reckoned to be about 35,000 years old. In the far west of Ireland, almost 100% of men with Gaelic surnames are in the clan of Oisin and the proportions are also very high in Wales (83%) and Scotland (73%). Even in England, 64% of men are in the clan. The very high proportions of clan members found in Iberia (70%), particularly among the Basques, was the first indication of the genetic continuity between Iberia and the Celtic west of Britain and Ireland which was later confirmed by detailed Y-chromosome fingerprinting. This emphasizes the importance for the colonization of Britain and Ireland of ancient maritime migrations along the Atlantic coast of Iberia, France and Brittany during the Mesolithic and Neolithic periods beginning 7000 years ago.

Recent research has also discovered that Oisin Y-chromosomes are found in significant proportions in many parts of the world that have experienced European colonization during the last five hundred years. About a quarter of New Zealand Maori carry an Oisin Y-chromosome. In parts of Central and South America this proportion rises to over half, almost as high as in Europe itself. In North America and the Caribbean, Oisin Y-chromosomes are also common, not only among the descendants of immigrant Europeans, as is to be expected, but also within the indigenous populations. This is almost certainly a signal of European males mating with indigenous females.

The clan of Sigurd, at 25,000 years old, is younger than the related clan of Oisin and his  descendants are concentrated in Northern Europe, particularly in Scandinavia where the clan reaches its highest frequency (30%) in Norway and also in Iceland (20%). The presence of the clan is a particularly valuable signal of Norse Viking colonization, not only in Iceland, but also in Britain where the clan reaches its highest concentration outside Scandinavia in the former Norse strongholds of the Orkney and Shetland off the North coast of Scotland.

The Tribes of Britain chart below reveals that since my roots (i.e. my deepest known ancestry) lie in Scotland and I am in the paternal clan of Oisin, then I am most likely to be of Celtic origin with possibly some Norse Viking blood thrown in (I may have to update my blog on Viking descendancy!). Equally, the same is true for my maternal clan of Helena. And this is in line with the genetic synthesis by Stephen Oppenheimer in his work The Origins of the British which reveals that the majority of Celts (Irish, Scots, Welsh and Cornish) arrived in the British Isles via the Atlantic coastal route from Ice Age refuges including what is now the Basque country.

This signature is pretty much in line with others, except that a couple of values are reported differently by Oxford Ancestors and need to be converted before being entered into some other databases (such as Ysearch). Thus, 3 needs to be added to the value of my DYS389i result, and this new value needs to be added to that of DYS389ii-i to get the value to be entered at DYS389ii (DYS389ii-i is the same as DYS389ii). So for me in Ysearch 389i will be 13 and 389ii will be 30.

This places me in haplogroup R, clade R1b (the paternal clan of Oisin according to Sykes’ nomenclature). My sub-clades are not known.

The Paternal Clans chart below is composed of interconnecting circles and each of these circles represents an ancient Y-chromosome clan. On the chart, the colours of the circles indicate, broadly, where the modern day descendants of the clan are predominantly to be found. If the circle is grey, then it indicates that there are very few, if any, men in the world that carry this particular clan father's Y-chromosome. The lines connecting the circles trace the evolutionary pathways of our ancestors. The grey star, or node, near the bottom of the certificate represents the ancestral father through whom all men are related, the man known as "Y-chromosome Adam". It is through him that we are related to the other, now extinct, species of humans, Homo erectus and Homo neanderthalensis, shown on the chart as a dotted line.

The golden star indicates the chart position of my ancient paternal clan as revealed by my DNA. It belongs to one of the 15 groups or clans that have been identified and named to date. The members of each clan are all descended from a single male ancestor through the direct paternal line traced on the chart. These men are called "clan fathers" and from my Y-chromosome signature it can be ascertained to which clan my Y-chromosome is most likely to belong. My precise Y-chromosome signature was compared to a reference database of haplogroups (ancient paternal clans).

There was actually nothing remarkable about any of these clan fathers when they were alive. It is known that each one of them must have survived long enough to father children and that each had at least two sons, starting-off expanding lines of descent that reach right down to all men alive today. These were real men who hunted and fought for their families, but who lived in very different circumstances to those that we enjoy today. They really were our true ancestral fathers.