There were and still are many other Raitts in Scotland besides those in Angus, Kincardineshire and Aberdeenshire. There are also Raitts from Arbroath who ended up in Glasgow and its surrounds (see Lanarkshire Raitts.) There are also some Raitts from Fife, who ended up in Perthshire via Nairn, with family members in Nicaragua. However, here mention is made of the family of David Rait and Anne Crichton of Fife and Edinburgh who spawned a family of goldsmiths and silversmiths (see Illustrious Raitts - The Craftsmen as well as American Raitts).

What the occupation of David Reat was and why he moved to Edinburgh is not yet known. However, he and Anne do not seem to be in either the 1841 or 1851 censuses - perhaps they were deceased at this time.

Their eldest son David in 1841 had married and had a family and had established himself as a goldsmith in Mossend, Kilbride & Lochranza, Bute, Scotland - a trifle off the beaten track. The 1841 census shows the family as comprising: David Raitt, aged 40, a goldsmith, born Outside Census County; children: Crighton, 10; Mary, 7; Henry, 3; and Fredrick, 1 - all born Outside Census County. No wife is listed.

In the 1851 census, however, living at 1 Newton Place, Barony, Lanarkshire is David Rait, head, age 53, goldsmith, born Fife; Fanny, wife, 51, born Lincoln, England; daughter Mary, 17 at school, born Glasgow, Lanarkshire; and sons Henry, 13; and Frederick, 11, both at school and also born in Glasgow. Whether Fanny is David’s first or second wife is not yet known.

A Frederick David Rait married Caroline Alexandrina Deans on 18 Sep 1866 in Anderston Glasgow,  Lanarkshire. This is presumably the son of the above David. They had a son born on 11 July 1867 in Cardross, Dunbarton whom they named Frederick Crighton Rait.

David and Anne’s son Robert (b 1807) emigrated to the United States in 1833 where he established his own company in New York dealing in silver and jewellery. He had a son named Crichton S. Rait born on 19 February 1845 in New York who was obviously sent back to boarding school in Scotland since he was a pupil at Edinburgh Academy from 1858-1861. At some point Crichton returned to New York as he died in Brooklyn on 25 Oct 1877 barely in his thirties. His father had died in New York on 1 February 1869.

There appears to be no mention of the other sons, James, William and Joseph, of David and Anne Rait in the 1841 or 1851 censuses for Scotland. Perhaps they had emigrated like their brother Robert to the USA - or possibly to England, Canada or Australia. This is a possible future follow up.

And since here we are so far talking about Raitts in Edinburgh, then for the sake of completeness and convenience, mention should also be made of Hugh Mitchell Raitt (1862-1925)  was the ninth child born to William Raitt and Helen Grainger. In the early 1880s Hugh moved first to Aberdeen for work and then to Montrose, Angus (where he married Jessie Ann Ryrie in 1886). He subsequently moved to Musselburgh, Midlothian in the late 1890s or early 1900s, again for work and subsequently forming a family business there in 1906 which is still thriving there today. More details of this family and its ancestry will be found under Kincardineshire Raitts. 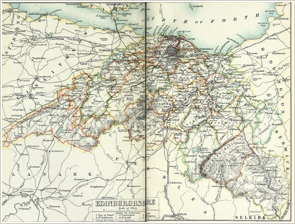 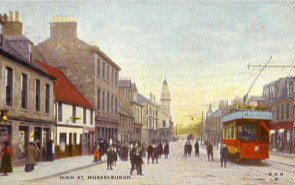