Isobel Sangster (subsequently appearing as Isabella) was born on 19 April 1798 in Pitgair, Gamrie & Macduff, Banffshire and died at Hill of Cotburn, Turriff, Aberdeenshire on 12 October 1873. One witness to her birth was John Robertson a crofter in Pitgair - who was probably her mother’s father and it was probably her own father, Alexander Sangster who was a witness at her marriage. She married James Scorgie on 10 September 1820 in Hungryhill, Gamrie & Macduff, Banffshire. James and Isabella had at least two children: Alexander Scorgie born on 4 November 1820 and Charles Smith Scorgie born 29 June 1829. They may also have had another son William Scorgie who was buried on 16 January 1827 aged four.

Isabella’s parents were Alexander Sangster (born 10 September 1747 in Crivie, Gamrie) and Margaret Robertson (born 28 February 1762 in Glens of Troup, Gamrie). They married on 14 April 1792 in Macduff, though their abodes were both given as Pitgair, where Alexander was a subtenant (crofter). They had at least two children: Alexander in 1792 and Isobel in 1798. An  Alexander Sangster, abode Avaulds in the parish of Gamrie & Macduff, was buried on 5 September 1827. Since Avaulds is a stone’s throw from Pitgair, then this could be either of these two Alexanders.

Alexander’s parents were John Sangster (1705-1775) and Elspet Smith (1707-1778). No date of marriage has been found and they appear to have had eleven children between 1728-1753 - one of whom was named for his grandfather, Patrick. Interestingly, John and Elspet seemed to have given two of their later sons the same names as their early sons (George and Alexander). While this sometimes occurred with a child that had died (and this seems to be the case with George), it was not the case with the first born son Alexander. Maybe they just liked the name (which also accounted for the practice) and there was about twenty years between the two sons. On the other hand, maybe they were not all children of this particular John and Elspet. Only three of their children (starting in 1745) have both parents names in the birth record - the rest just having the father’s name as was normal. However, given that the abode in the early children was Lichnet then I am assuming that they are the children of this John Sangster since his father Patrick and his siblings had the same abode.

In any event, for her to have her first child with John Sangster in 1745 (and subsequently others up to 1753), then she would presumably not have been born in 1707 when she would be nearly forty - a bit old for a first child in those days. So either it was the same Elspet Smith throughout (being born in 1707 and having her first child in 1728 would be more likely) or else there was an earlier wife whose name is not known. On the other hand a George Smith was the witness for a couple of the earlier children - he is possibly a brother.

A gravestone is in Gamrie St John’s churchyard, erected by John Sangster and Elspet Smith in memory of children George and James.... Also Isobel Wilson, spouse to John Sangster in Knowhead, died 23 July 1789. Another stone there was erected by the surviving children of John Sangster, farmer in Minneny, died 23 February 1775 aged 70; Elspet Smith, spouse, died 24 December 1778 aged 71; John Sangster, sometime in Knowhead, died 5 January 1791 aged 63. There are several other gravestones relating to other family members in St John’s kirkyard, including the first-born Alexander mentioned above.

John Sangster’s father was Patrick Sangster and his mother was named Isobel. Their abode in 1705 was Mill of Lichnet, Gamrie. They had five children between 1705-1720, with John being the first born. There are a couple of other Sangsters at the same abode who may be brothers of Patrick, namely Thomas and Peter Sangster.

In the 1851 Census Isabella Scorgie, aged 52, widow is living with son Charles Scorgie, farm servant, aged 21 at Pitgair, Gamrie. Her mother, Margaret, presumably had died between 1841-1851.

In the 1861 census Isabella Scorgie (62, Slate Quarryman's Widow, b. Gamrie) is living in Pitgair, Gamrie with grandson William Scorgie (8, b. King Edward, Aberdeenshire). It is not clear who grandson William is. Isabella’s son Alexander did have a son called William but he was born in Gamrie in 1851 and anyway shows up in the 1861 census with his parents. There seems to be no William Scorgie born in King Edward around 1853.

In the 1871 census Isabella Scorgie, age 73, widow, born Gamrie, is living alone at Hill of Pitgair and is employed as a washer.

She died in 1873 at Hill of Cotburn, Turriff, Aberdeenshire - presumably having gone to either visit or spend her final days with her son Alexander and his family who were farming there.

Some of the descendants of the earliest known in this Sangster line are given for eight generations down to my grandmother Helen Scorgie. 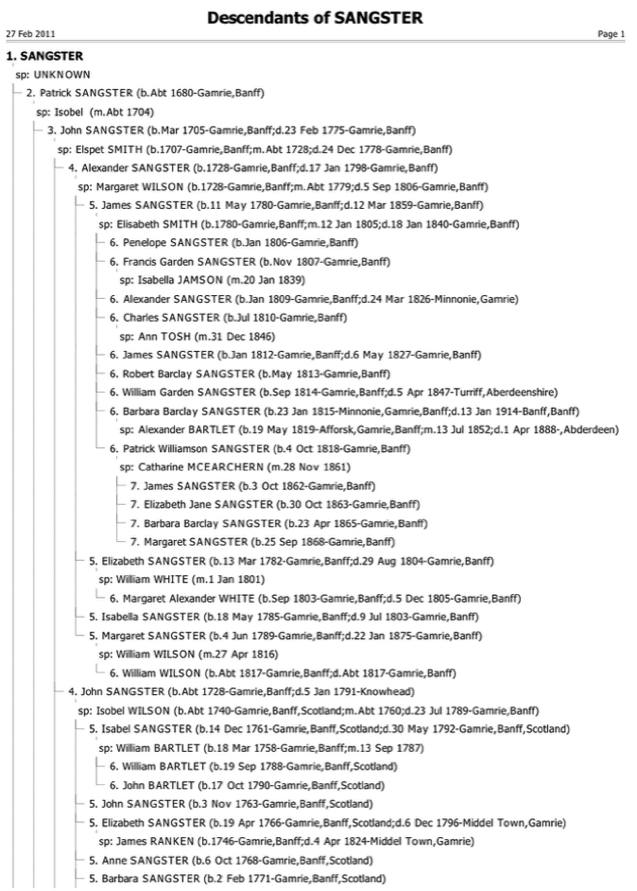 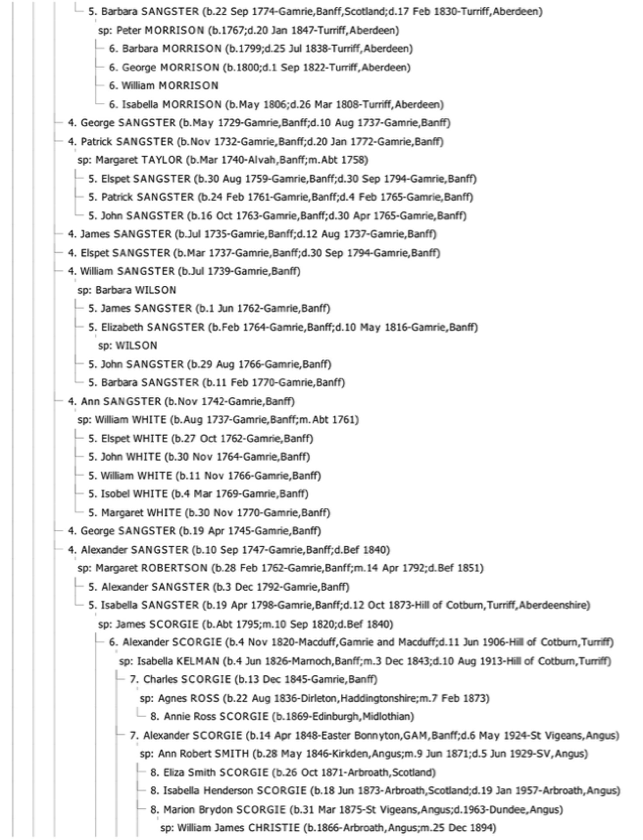 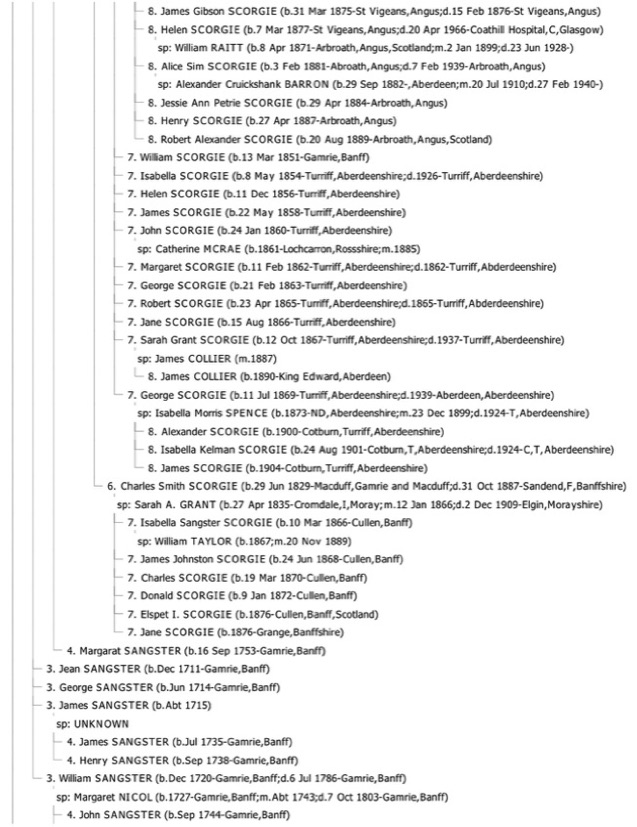 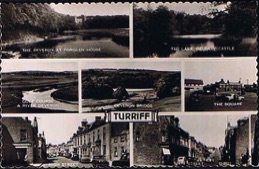