At the times of the Old (First) and New Statistical Accounts, the county we now know as Angus was called Forfar. In fact, the county of Angus was part of the ancient Pictish kingdom which was taken over by the Scots in the late ninth century. The name may have originated from the Scots house of that name, though it was also the name of two Pictish kings. The name Angus for the county was used until around 1650, when the Cromwellian government of the time decided to rename it after Forfar, the county town. However, the old name of Angus continued to be favoured by mapmakers and eventually in 1928, the ancient name was reinstated in place of Forfarshire.

The main locations for my own (and my cousins – both Scottish and American) Raitt families are Arbroath and St Vigeans and these are thus the first parishes I have included for Raitts. It is just so fascinating to read about the environment and social conditions that my ancestors were part of and the momentous event when a French privateer bombarded the town of Arbroath and demanded it submit. My family was there when that happened! In the New Account there is a description of the streets,  houses and buildings with which our great great grandparents would have grown up with. And there are hard facts which show just how many children died young and what they died of and how many people could read and write. The authors of the Accounts show their prejudices such as bewailing the fact that the public reading room was allowed to remain open on the Sundays and have harsh words to say about those who get married without thought of how they will support their families or who drink their money away. They also know which side their bread is buttered on by being positively glowing about the landowners and people in some instance. These are not accounts where criticism is levelled, although the authors do note that parents were not good at recording births of their children, or deaths – hence the paucity of many parish registers. And they often complain about the iniquities of certain taxes e.g. on fuel which makes life harder.

However, these were the times my great grandfather and his two brothers were born into and the life and conditions in Arbroath might have been the trigger for two of them to start a new (probably much harder) life in America. Certainly, the New Account gives a very real overview of how and where the families lived and worked, how much they earned, paid in taxes, saved, ate, how many went to church or spent Saturday nights in a place with no crime and hence no police, and got around by stage coach to nearby towns. We can see what they would have been taught and school and how much, in anything, lessons cost. The growth of the flax industry, with the subsequent building of mills and the employment of people also affords a remarkable insight into our ancestors who were weavers and who were amongst the most poorly paid. Interesting to note also is the inflationary increases in the price of property over the years as well as a banking crisis that very much affected Arbroath!

Other Raitt families, who may have been related, lived nearby in, for instance, Logie Pert, Kinnell, Inverkeillor, Montrose and elsewhere and I hope to add the accounts of these parishes later if they are in the right time span. I have, though, included the Statistical Account for Glenisla (Glen Isla) to give the descendants of the Bovina Raitts (many of whom subsequently found fame and fortune in California as well as elsewhere) an idea of where their first ancestors who went to the United States lived and worked as farmers. Since the family of Thomas Raitt emigrated in 1817, then I have not felt it necessary to include the New Statistical Account dated 1842.

Since my maternal grandmother’s family and ancestors (the Lindsays on the male side and my mtDNA on the female) came mainly from and farmed around Lethnot & Navar, Menmuir, Tannadice, Cortachy & Clova, and later Airlie, Eassie & Nevay, and Kirriemuir (New), then I have also included several of these parishes since their families were living, growing up and working there at the time of the Accounts. The First Account, in particular, provides a great description of what it was like to be a farmer, miller or tenant in those days – the types of soil and crops, the weather and hardships encountered, the difficulty of transport, the prices of goods and how improvements were gradually made. The descriptions of the countryside, the mountains and glens, the streams, the flora and fauna, the ancient sites etc are often truly evocative and couched in really poetic terms. It is easy to imagine the young children exploring and playing among the ruined castles and standing stones and running over the moors and looking for fresh-water pearls or minnows in the streams. 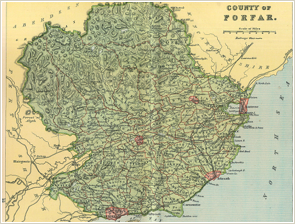 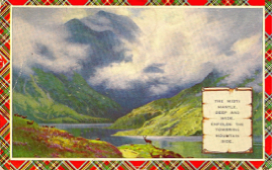 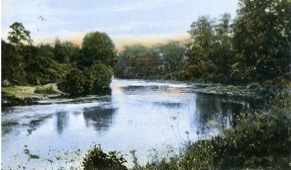