Alexander Scorgie Raitt was the sixth child of William Raitt and Helen Scorgie and was born on 18 December 1909 in St Rollox, Glasgow. Known as Alec, he was initially an umbrella maker, but later worked in the Drawing Office in the dockyards. He married Mary Duncan McCallum West on 27 April 1935 in Hutchestontown, Glasgow and they had one son, Alexander McCallum West, born on 7 July 1936 in Tradeston, Glasgow.

Peter McCallum was first married to Margaret Ewing and had six children with her between 1855-1864: Janet (1855); John (1856); Dugald (1858); Peter (1860); Jane (1862); and Margaret (1864). With his second wife, Margaret Robertson, Peter had two more sons; Duncan (1867); and Alexander (1869). Finally Peter had another son, Adam (1873), with third wife Jane Steel. I surmize that Margaret Robertson died not so long after Alexander was born and possibly Peter could not look after the young child with all the other children and since his sister, Helen and her husband John West, did not have any children of their own, then Alexander went to live with them. Since he was subsequently called West, then it is possible they formally adopted him, especially as the censuses label him son.

Alexander’s wife, Mary Duncan, was born in 1872 in Glasgow, the daughter of George Duncan and Mary Esdale who married in 1861 in Blythswood, Glasgow. Mary was born about 1838 in Glasgow to James and Ann Esdale of Ireland (1841 census has them both aged 20 living in St Ninians, Gorbals, with daughter Mary aged two).

In the 1841 census for Tynaclach (Tigh na clach), Arrochar, Dunbartonshire, Peter, aged 11 is living with his parents Dugald McCallum, 35, fisherman and Janet, 30 and six siblings.

In the 1851 census for Midtown, Inverkip, Renfrewshire a Peter McCallum, 21, farm servant, born Arrochar, is working on the farm of James Hendry (farmer of 48 acres).

In the 1901 census for 118 Clarence St, Govan, Tradeston, Lanarkshire, Peter McCallum, age 70, widower, grainstoreman born Arrochar, is a boarder staying with John (56) and Helen (56) West - his brother-in-law and sister.

In the 1881 census for 8 Whitehall St, Barony we find son Alexander West, 12, message boy, born Glasgow in the household of John West, 40, brass finisher, born Cross Michael, Renfrew; and his wife Hellen, 40, born Arrochar, Dunbarton. Helen is most likely Helen McCallum, Alexander's aunt (his father Peter's sister) and he was probably sent to live with them after his mother died.

As noted above, in 1911 census Mary was aged 1 living with her parents and siblings at 15 South Wellington St, Hutchesontown, Glasgow. 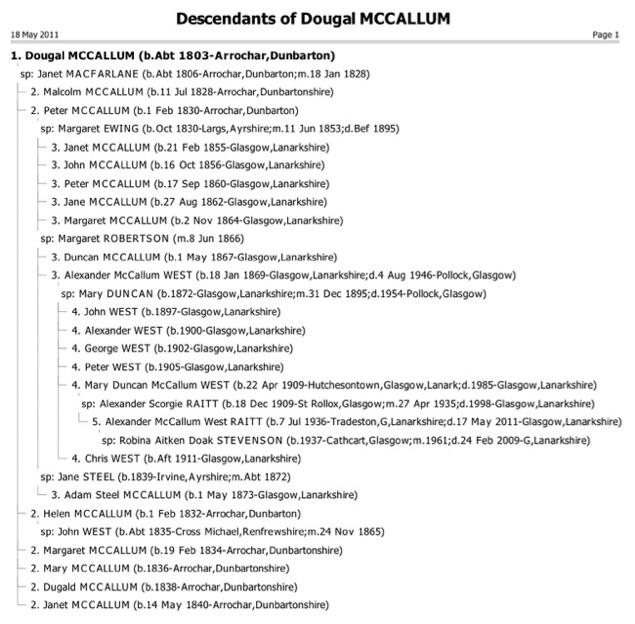