What is of interest is the extent of the information kept at Army Base Records in Melbourne - besides Charles Henry Raitt’s own medical file and service records, there are also copies of correspondence between his wife Amy (and others) and the Officer i/c Base Records concerning Charles. If every spouse of a soldier in the Australian Imperial Force (A.I.F.) wrote so voluminously to Base Records, then it was clearly a full-time job just to keep up with acknowledgements and replies! I have included much of all this below since it provides some additional insights into Charles and his family, especially the relationship with his wife who was trying to ascertain his whereabouts, as well the A.I.F. and record keeping.

There is a reply in Charles’ records to a Miss Addie Brown, 416 Dorcas Street, West, South Melbourne, Victoria, who presumably wrote to Base Records to inquire after him, for on 24 August 1915 there was a reply to her saying “Dear Madam, In reply to your enquiry of 20 inst., I beg to inform you no official report has been received here concerning Major C. H. Raitt, 21st Battalion, consequently it may be assumed he is with his unit. His postal address is as under: Major C. H. Raitt, 21st Battalion, 6th Infantry Brigade, Australian Imperial Forces, Alexandria, Egypt.” Signed by the Officer i/c Base Records. Who Addie was is not known - possibly someone who had worked with Charles at the bank.

Charles’s wife, Amy, must have been apprised of her husbands pending return to Australia, for on 11 December 1915, she wrote, presumably to Base Records, as follows: “Dear Sir, Thanks very much for your information re my husband Major C.H. Raitt’s return to Australia. I’ve already had 2 cablegrams from my husband, - one from Helouan sent on 20 Nov stating that he was being invalided home and the 2nd one came from Cairo dated 6 Dec saying that he had left and would arrive about the 30th. I presume that there will be some notification of the arrival of the troopship a few days beforehand. I propose going to Melbourne to await my husband’s return, but of course would not venture amongst the crown on arrival of the ship. Now I would be extremely obliged to you if you could let me have further information when quite certain that Major Raitt is on the named (Themistocles) as it is the first time I’ve hear the name. Yours truly Amy Raitt.” A formal acknowledgement was recorded as sent on 15/12/15.

Then on 23 December [1915] a reply was sent to Mrs A. Raitt, Clarendon Street, Maryborough, Victoria - “Dear Madam, I have to acknowledge receipt of your communication dated the 11th inst., concerning your husband Major C. H. Raitt, 21st Battalion, who is reported as returning to Australia, and in reply beg to inform you that advice has now been received to the effect that the transport Themistocles will arrive at Fremantle on the 24th and should reach Melbourne, weather and other circumstances permitting, on or about 31st idem. You will be promptly advised should any later information come to hand.”

On 2 January 1917 Amy was sent a reply from the Officer i/c Base Records - “Dear Madam, I have to acknowledge receipt of your letter dated 28th ultime, concerning your husband, Major C. H. Raitt, Sea Transport Services, who returned to Australia (on duty) on 30th ultime, and to state in your previous communication of 18th idem you did not mention your husband’s name and it was not know to whom you referred. You are were therefore asked to furnish fuller particulars, in order that his name might be identified on the records. It is regretted that your name was incorrectly spelt Raill on the enveloped you enclosed.”

On 10 August 1917, Amy’s Solicitor E. S. Herring in Maryborough wrote to Officer i/c Base Records, Victoria Barracks, Melbourne saying “Will you please let me know if Major Raitt has left the state on military duties - I understand he has  been given charge of a transport.” A reply was sent on 15 August to the effect that Major C. H. Raitt was to have embarked as Officer Commanding Troops on board a transport which left Sydney on 4/9/1917. His documents had not yet been received, therefore embarkation was unable to be confirmed. The information would be available in a few days time.

On 1 December 1917, Amy Raitt wrote to Major J. M. Lean, Officer i/c Base Records saying “Dear Sir, I have just received the notification and thank you for same, but may I beg of you to let me know exactly when the transport my be expected to arrive in Melbourne (or how can I know). Am I to understand that Major Raitt will be here very shortly. As I wish him to get a parcel on arrival, could you kindly tell where I could address it and also a letter, so that he will receive it safely? Hoping you will spare a moment to answer this note. I remain yours truly Amy Raitt. PS  The initials on your note were not mine, but belong to Major Raitt’s mother who is in Russia). My full address is Mrs C.H. Raitt, Maryborough. In the case of allotment money I am addressed as Mrs Amy Raitt.

Mrs Amy Raitt, Clarendon St, Maryborough received and signed for a package from the Defence Department of the effects of CHR 21st Bat on 8 Dec 1917. That same day she wrote to Major H. Coborne saying “Dear Sir, The package came safely to hand and I am enclosing receipt for same - tho I cannot quite make out why it was forwarded on and addressed to me instead of being handed over to Major Raitt himself on his return - unless there was some reason that I, being his lawful wife should be the one to have possession of it. Am I supposed to hand it over to my husband when he is back again in Melourne? It seems strange that this Commission Form should only come now, after such a long time (since 1 April 1915). I should like to know whether I am to retain it.

Amy was sent a reply from Officer i/c Base Records on 14 December 1917 acknowledging receipt of her letter dated 8th instant, relative to Commission Form issued to her husband, Major C. H. Raitt, Sea Transport Service, and stating that it was to be retained by her until his return when it should be handed over to him and that the preparation of these forms had to stand in abeyance until such time as they would receive necessary attention.

Amy was sent another letter from Officer i/c Base Records on 14 December 1917 acknowledging receipt of her letter dated 1st instant, stating that the transport by which her husband, Major C. H. Raitt, Sea Transport Service, late 21st Battalion, was returning, was due at the end of the month or the beginning of January, but no definite date was at present available. When the transport was nearing Australia a list (marked “B”) of those reported to be on board would be published in the press - date of arrival would also be advertised. With regard to the letter and parcel, it was suggested she address them to Returned to Australia, Major C.H Raitt, Sear Transport Service, c/o Staff Officer for Invalid and returned Soldiers, Victoria Barracks, Melbourne.

Amy wrote again to Base Records on 16 December 1917: “Thanks for note received on 15 inst.. I am wondering why you have twice addressed me as Mrs A. W. Raitt. This is as you should address Major Raitt’s mother (who is in Russia). Perhaps he left this same address in case a letter had to be forwarded on to her in the even of something awful happening to me - or to him - of course I can’t tell, but it is strange to me how you could have got hold of the initials of his mother, unless he particularly left the address for some reason or another. Yours truly Amy Raitt or (Mrs C. H. Raitt) [C.H. underlined] Her letter was acknowledged on 18 December and that same day she replied to Major J. M. Lean saying that she was much obliged to him for his letter received that day in reference to the Commission Form and also for information as to the expected arrival of Transport, due soon now (as also for address). When you know definitely [underlined] the date of arrival, I hope you will send me word. This letter was returned to her on 21 December with a typed standard note to the effect that the attached communication is returned in order that the regimental number, rank, full name, unit of the Soldier referred to may be stated. Obviously a trifle irritated, on 28 December 1917, Amy replied to Major J. M. Lean: “Dear Sir, Your note to hand, and in reply I wish to state that my husband’s full name and rank is as follows: Charles Henry Raitt, Major. When he first went away to the front he belonged to the 6th Brigade, 21st Battalion, and the number on his cap was 73. This is all I can tell you - tho I can scarcely understand why I am asked to state this now. Again I have been wrongly addressed (as Miss Amy Raitt). It should be Mrs Amy Raitt or properly Mrs C. H. Raitt. Yours truly Amy Raitt. PS I see by the paper that List B has been mentioned so I conclude that the transport has arrived.”

Base Records also had on file a handwritten letter from Mary Raitt [presumably Charles’ mother - who he may very well have visited whilst awaiting the departure of the Berrima back to Australia] dated 7 February 1918 and sent from 39 Woburn Place, W.C.1, London. “Dear Sir, I have been advised, by the Australian Headquarters here, to apply to you for information concerning Major C. H. Raitt who returned to Melbourne on 31 October last on Sea Transport Service. Would you kindly let me know where he is now and if it is likely that he will return to England and when. I should be most grateful for an answer as soon as possible.”

A reply was sent to Mary on 28 March 1918 advising her that Major C. H. Raitt disembarked at Melbourne on 30 December 1917, and his appointment in the A.I.F. terminated on 1/1/18. Mails directed c/o Woolcott & Drysdale, Solicitors, Melbourne, the address left by him, would no doubt be forwarded to wherever he may be located. The Officer i/c Base Records was unable to state whether he intended to return to England. 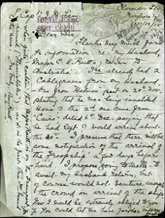 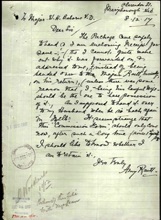 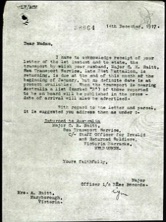