My great, great grandfather John Raitt was born in Arbroath on 17 September  1805, youngest child of Alexander Raitt and Susan Millar and grandson of John Raitt and Jean Meikison. On his birth record John’s father is listed as John, but this has been crossed out and the name Alexander inserted. The name is also spelled Rait. Unlike his father, who was a linen weaver, John became a master mariner in the merchant service. The ships he sailed on and some fascinating details about his service are outlined below.  Information about other Arbroath mariners can be found on a separate page, as can details of the examination requirements they had to undertake to achieve competency as well as an overview of what it meant to be a Master Mariner.

John married Elizabeth Dorward, born on 20 June 1808 in Arbroath, on 1 March 1833 in Arbroath and they had three boys and two girls. Two of their sons John Raitt and James Dorward Raitt, also a master mariner,  emigrated to the United States with their fledgling families in the mid-1800s. Daughter Margaret Phillips Raitt, probably named after her maternal grandmother Margaret Philips, never married, while daughter Elizabeth Dorward Raitt married into the Doig family which is well documented on the Web. Son David Dorward Raitt, my great grandfather, and nearly ten years younger than his eldest brother, also a sea captain and newly married, stayed on in Arbroath until his early death at age 40. John died on 10 December 1880 in Arbroath and Elizabeth died a couple of years later on 8 August 1883. 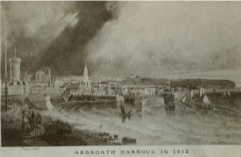 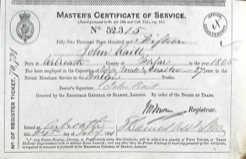 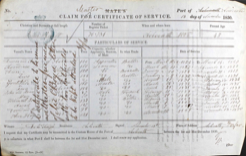 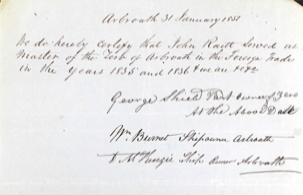 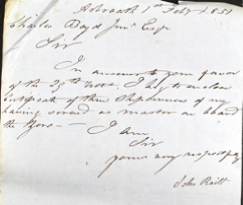 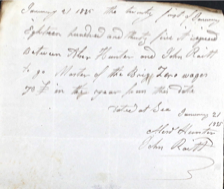 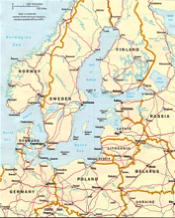 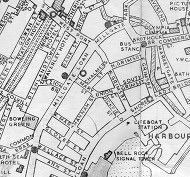 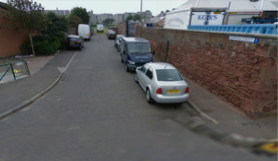 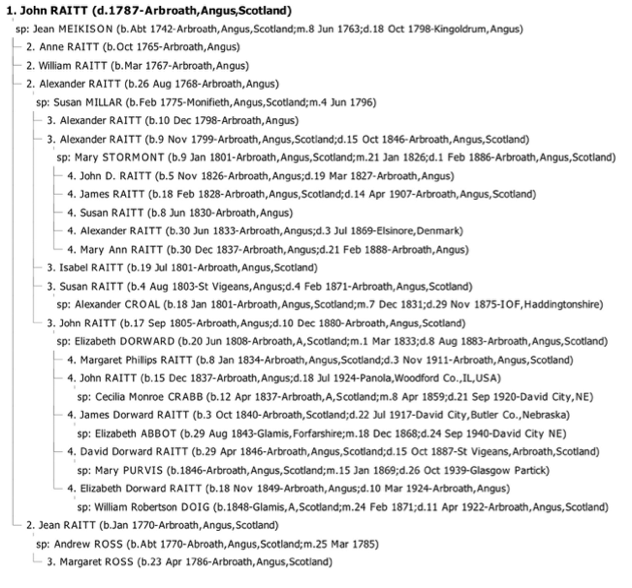 The tree below shows some of the family members and descendants where known down to my great grandfather’s generation and starts with John Raitt and Jean Meikison of whom we are sure.

The 1865 Valuation Roll for Arbroath reveals that John Rait, seaman, was living at 18 Hannah Street - which comprised a house and yard - as a tenant occupying two rooms and paying a yearly rent of £3 10s. The house had two other rooms which were let at the same price to John Smith, seaman, and an attic which was let for £1 10s to James Dorward, seaman. James is probably John Raitt's brother-in-law. The proprietor of the house was John Thomson's heirs per Jas. Thomson.

In the 1871 census for Arbroath, Ladyloan, still living at 18 Hannah St, occupuing two rooms with one or more windows, are John Raitt (65, store keeper, shipbuilding yard) and wife Elizabeth Raitt (63).

Sailing from Angus to the Baltic, John would have had to have crossed the North Sea and passed between Norway and Denmark through the Skagerrat and Kattegat, a wide and continuous waterway. Once through and thus facing South, he would have been confronted with a confusion of islands through which there are three usable channels: the Sound, the Great Belt and the Little Belt – all navigable, though the latter two are beset with shallows. Though the Sound is the safest option, it is only 8m deep and 5km wide at its narrowest point and with a complex flow of water. Indeed, John’s nephew Alexander Raitt foundered in the Sound and met his death at Elsinore (Helisingør – narrow strait) in July 1869.

One can only imagine the ports John may have called at in the Baltic region: Gothenberg, Elsinore, Copenhagen, Stockholm, Lulea, Vassa, Helsinki, St Petersburg, Tallin, Riga, Gdansk. By trade with Franck was probably meant the French coast and Brazilles may not have been Brazil, but perhaps Brussels or rather the Belgian coast. Although I haven’t found specific references to John’s voyages, it is possible to get an idea of trade from other trips by the same ship. Thus, for example, in 1830 the Gratitude registered in Dundee made over a dozen trips to places in England as well as abroad: North Shields to Stockholm carrying coal; Stockholm to Cronstadt carrying ballast; Cronstadt to London carrying iron and feathers; London back to Cronstadt carrying gum, wood (log wood), sugar, rum, tin, cotton, indigo, and paper; Cronstadt to Dundee carrying hemp – all within the space of six months.

On his claim form we have a list of the ships on which John served. What is remarkable is the amount of time spent on one ship at sea trading at any one time – usually around 18 months or so, but sometimes as long as three years - and the amount of shore leave in between – typically just a few days. Of course, the ships may have been simply plying to and fro from their home ports and thus the crew was not necessarily away from home for such extended periods.

On his register ticket number 70.731 in the capacity of Mate, issued at Hull (England) on 28 December 1844 (when he was aged 39), it states that John Raitt was born at Arbroath in the county of Forfar on 15 September 1805. He was 5ft 9in tall, his complexion was dark, his hair was brown, he had blue eyes and no distinguishing marks. He could write. He first went to sea as an Apprentice on 28 March 1824 (when he was 19). He had not served in the Royal Navy, nor been in Foreign Service. When unemployed (i.e between ships) be resided in Arbroath. Alongside this information are details about his reported voyages Out and Home between 1845 and 1851, but the writing is not easy to read or understand and the names of ships do not appear to be given. In 1855, aged 49 and in possession of certificate 57.315, he was Mate aboard the Mercury of Arbroath.

John completed a claim for a certification of service on 13 November 1850 when he was aged 45. The claim form was witnessed by D. McKenzie (a ship owner) and signed in Arbroath on 13 November 1850. The certificate was requested to be transmitted to the Custom House of the Port of Arbroath. The form was obviously modified – possibly by the authorities who received the claim on 22 November 1850 - because the word Mate’s (claim) is crossed out and the word Master inserted. Also the Port of Arbroath is crossed out and Newcastle substituted. The claim is also overwritten “Certificate to be issued as Master per order of Mr C. Boyd letter with two certificates to be kept attached. (dated) 3/1/51”

The letter from Mr Boyd was occasioned by a letter to him (Charles Boyd Jnr Esq) dated at Arbroath 1 Feb 1851 from John Raitt in which he writes “In answer to your favor (?) of the 29 th inst. I beg to inclose certificate of three ship owners of my having served as master on board the Zero. I am, Sir, yours very respectfully, John Raitt”.  What he enclosed was a note dated Arbroath, 31 January 1851 that stated “ We do hereby certify that John Raitt served as Master of the Zero of Arbroath in the Foreign Trade in the years 1835 and 1836”. It is signed by George Shield, part owner of Zero; Wm. Burnet, ship owner, Arbroath and D. McKenzie, ship owner, Arbroath.

The second certificate that was attached to Mr Boyd’s letter was possibly another interesting letter pertaining to John and dated 21 January 1835 (when he was Master of the Gratitude). It states that “It is agreed between Alexr. Hunter and John Raitt to go Master of the Brig Zero wages £70 in the year from this date” and is signed and dated at sea by both Alexr. Hunter and John Raitt. Presumably Alexander Hunter was a ship owner.

John’s Master’s Certificate of Service number 52.315 was duly issued on 24 February 1851. It notes that he was born in Arbroath in 1805 and  been employed in the capacity of Apprentice, Mate and Master for 27 years in the British Merchant Service in Foreign Trades.