Mary Purvis, my paternal great grandmother, was the sixth child of William Purvis and Catherine Wilkie. No birth record has been found for Mary (or for several of her siblings). Given her age at marriage, in censuses and at death, then she must have been born about 1846 in Arbroath. Her mother was Catherine Wilkie and her father was William Purvis according to her marriage certificate and censuses (though not according to her death extract). Mary appears to be named for an elder sister Mary who had died a few years earlier - this seems to have been a common practice.

Mary’s statutory death extract shows her death at age 94 was registered by her grandaughter Lily Raitt (daughter of David Raitt). Her husband is given as David Dorward Raitt, master mariner; her mother is given as Catherine Purvis (Wilkie), but her father is given as John Purvis, shoemaker, deceased. As has been evidenced before grandchildren - even children - made mistakes with the names of relatives. She died at 12 Victoria Park St, Glasgow Partick and was buried in Arbroath Western Cemetery along with husband David and four others. Mary was married, aged 22, to David Dorward Raitt, also 22, at her home, 17 Panmure St, Arbroath, on 15 January 1869. Occupation at marriage was given as flax mill worker-filler. Her parents given as William Purvis, shoemaker and Catherine Purvis, Mrs J. Wilkie. Witness were William Doig, bleacher and James Raitt, bootmaker. William was the husband-to-be of David’s sister Elizabeth Dorward Raitt, while James would have been David’s cousin (son of his uncle Alexander Raitt and wife Mary Stormont).

In the 1871 census for 21 Dishland St, St Vigeans is Mary Raitt, head, seaman's wife, aged 25 and son David, aged 1. They are occupying one room with one or more windows.

In the 1891 census, Mary Raitt, aged 45, is living at 15 St Vigeans Rd, St Vigeans with her sister, Elizabeth Purvis, aged 55, and sons David, aged 21, Apprentice Painter; and John, aged  16, heckle machine worker. They are occupying four rooms with one or more windows. Living next door is Frederick and Helen Rhind and family.

Mary probably moved to Glasgow along with her children some time in late 1901 or early 1902.

According to the Glasgow Valuation Rolls for 1913-14 Mrs Mary Raitt was a tenant at 14 Earlston Avenue, Municipal ward 6, Glasgow. In the same building was her son William Raitt and family.

No birth date has been found for William, but from his age given in censuses and at death (56) he must have been born about 1813 in Montrose, Angus. His death extract shows that he was illegitimate, giving his parents as David Purvis (flesher in Montrose) and Elizabeth Souter (domestic servant). It gives his occupation as shoemaker and notes he was married to Catherine Wilkie. His death was registered by his son William, a boot closer.

In the 1841 census, William Purves, age 25, is not at home with his family. Instead he is visiting his mother Elizabeth Souter (45, cowfeeder) living in Allardice St, Feterson, Kincardine with Ann Nicol (55, cowfeeder). William’s occupation is given as shoemaker journeyman.

There is a gravestone in Arbroath Abbey that simply gives the date 1849 and erected by Wm. Purvis. Shoemaker. This may very well be in memory of his daughter Jane Purvis who died on 25 September 1849 aged about four.

David Purvis is given as the father on son William’s birth extract, occupation flesher in Montrose. A David Purvis, flesher, died in New Wynd, Montrose on 23 April 1836 aged 56 and presumably this is the same chap. He would thus have been born about 1780. There was only one David Purvis born around that time in Montrose, namely on 17 July 1782 to David Purvis and Margaret Leighton. They married in Montrose in 1778 and had four children between 1780-1787, David being the second born.

David appears not to have married William’s mother, Elizabeth Souter; however, a David Purvis is recorded as having married Helen Taylor in Montrose in 1818. They had three children between 1821-1830. This is also presumably the same man, because in the 1841 census for Market St, Montrose we find Helen Purvis, 50, lodging house keeper (born outside Angus) with daughter Ann, 15, linen yarn spinner; and significantly, Thomas Stevenson, 30, who is a flesher journeyman.

David’s father, also David Purvis, was born in Montrose in March 1754 and died there in December 1820. His parents were William Purvis (recorded as Wm Pyrrhus at marriage), assumed born about 1725 and Margaret Steedman (the name is given variously as Stiedman, Steidman and Stedman) who was also assumed born around 1725 in Montrose and who may have died there in July 1800. They married in Montrose in October 1747 and had four children between 1748-1754, of whom David was the youngest. A witness to the marriage was David Stedman, who may be Margaret’s father. A William Purves is recorded as being christened on 19 December 1730 in Montrose to William Purves and Eufame Will. They had five children between 1729-1737, William being the second born - this could very well be the right chap given that there were no other Williams born around this date in Montrose. There are two possibilities for his father, William, in Montrose - the William Purves born in February 1686 to Alexander Purves and Helen Orchardsone or the William Purvess born in January 1696 to William Purvess and Jean McComie. This latter seems the most likely going on the dates of his wife and children. There is only one likely female born in Montrose with the name Eufame Will and that is the Euphem Will born in December 1695 to John Will and Margaret Rennay.

David’s mother, Margaret Leighton was born in Montrose in February 1750, daughter of James Leighton and Jannet Jamison who married in 1745 and had four children between 1745-1750).

Elizabeth Souter (also Soutar, Suter and Suitor) was the mother of William Purvis. She was born in Benholm, Kincardine and christened there on 26 January 1789. Her parents were David Suter and Isobel Ross, who married in Laurencekirk, Kincardineshire in 1778 and had at least four children born in different places in Kincardine between 1779-1792. Elizabeth was in her early twenties when she met David Purvis and had William. Presumably she had gone to Montrose for work and at some point moved back to Kincardineshire. On William’s death extract in 1969, her occupation was given as domestic servant.

In the 1841 census, Elizabeth Souter (45, cowfeeder) is living in Allardice St, Feterresso, Kincardineshire with Ann Nicol (55, cowfeeder). Also there, presumably on a visit, is her son  William Purves, 25, shoemaker journeyman.

The census for 1851 shows Elizabeth Soutar, aged 60, head, unmarried, meal seller, born Benholm still living in Allardice St, Feterresso, Kincardineshire with Mary Nicol, aged 65, pauper, born Edzell, Angus. (Presumably Mary is an error and Ann is meant. An Anne Nicol was christened on 30 March 1785 in Edzell to David Nicol - but there is no Mary Nicol born in Edzell around this time).

An Elizabeth Soutar died on 10 September 1865, aged 75, in the lunatic asylum, Sunnyside, parish of Montrose. No parents or other family are given on the death extract, but this is presumably her since the dates and age tally.

Some of the descendants of the earliest known in this line, William Purves, are given below for the seven generations down to my grandfather William Raitt. 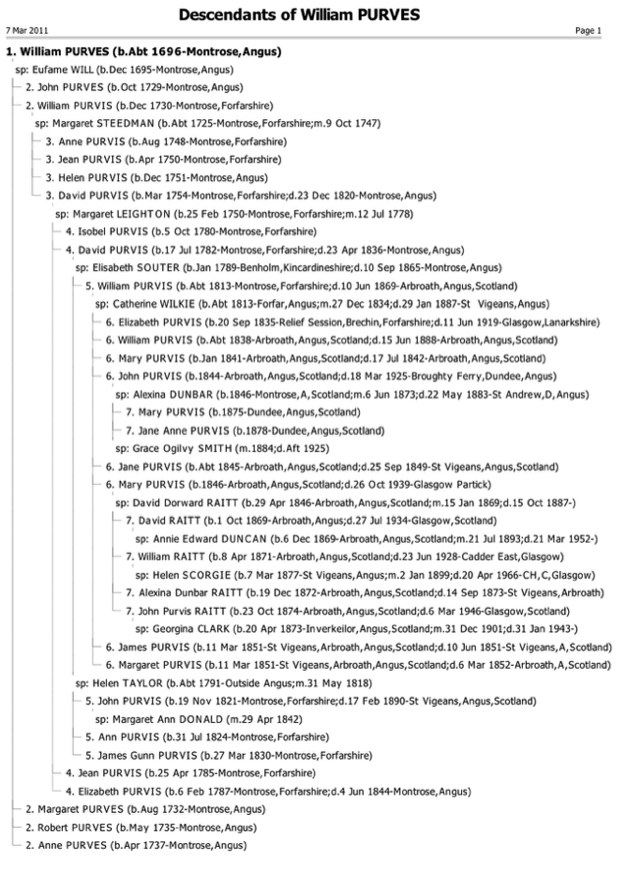